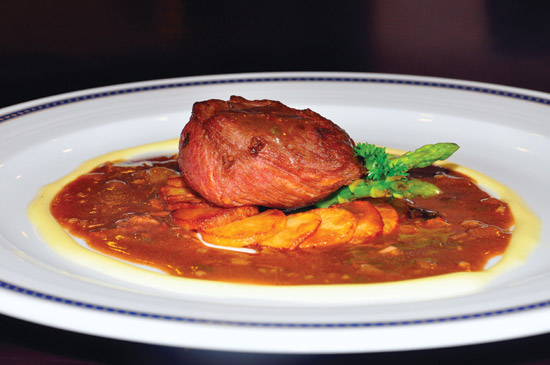 This Paris is in the East

When talking of food there is definitely a French connection in Vietnam. Witness the baguettes for sale on street corners at breakfast time. It may not be in the DNA, as the modern idiom goes, but it is certainly in the language. A few examples are cÃ  rá»‘t (carotte, carrot), phi lÃª (filet, fillet), rÃ´ ti (rÃ´ti, roasted), sÃºp lÆ¡ (choux-fleur, cauliflower) ba rÃ´ (poireau, leek), á»‘p la (au plat, on the plate/ flat) as in bÃ¡nh mÃ¬ á»‘p la, a breakfast favourite of fried eggs with baguette, and atisÃ´ (artichaut, artichoke).
When a cuisine is on offer outside its own territory it is often modified to suit local tastes or culture. The spice in Thai food is toned down in England to make it acceptable to a people not used to having their palates set on fire. Knives and forks need to be on the table for people who have never in their lives used chopsticks. However, if I go to a French restaurant I prefer to eat as the Parisians do. Whilst I am open to local variations or a little creative fusion, I normally want my food to be, for want of a better word, â€˜authenticâ€™.
When I phoned to book a table to sample the fare at a new French restaurant I was a little taken aback at being asked by a lady with a Vietnamese accent, â€˜What dishes would you like to try?â€™ â€˜Thatâ€™s Okâ€™, I replied, â€˜Iâ€™ll order courses from the menu.â€™ I worked in Beijing for two years and would on occasion eat at the famous Russian restaurant where during detente Nixon and Kissinger dined. They would serve Chinese-style a number of dishes all at once and all in small portions. I was hoping that at Vatel my meal would come in instalments and not in one downlayment.
Vatel is on the fringes of District 1 in a street already famous for eateries, Suong Nguyet Anh. It is very near the Cultural Park, which could come in useful for a pre- or postprandial Dickensian stroll. You will dine in peace as it is set back from the noisy road down a pebble driveway with flagstones that have the names of cities and countries around the world. Vatel, as I was soon to learn, operates as a global franchise of Vatel International Business School Hotel and Tourism Management and is even present in Saudi Arabia, though you will not be getting any wine-based sauces there.
I was met at the door by Mrs Kim Thanh, assistant restaurant manager. She was anxious to take me to see the school, on the floor above. I viewed the bright, shiny classrooms and noted that in spite of its having been open only a few months there was no shortage of students. Mrs Kim Thanh explained they alternated between a week of theory here and a week of practical work in the restaurant.
Also on this floor is the kitchen where head chef M. Patrick Berenger was demonstrating to a crowd of enthusiastic and beady-eyed apprentices how to prepare the famous fish dish of â€˜bouillabaisseâ€™. This hotpot, not unlike the Vietnamese láº©u cÃ¡, originates in the very fishy city of Marseille, which has the good fortune to be on a rocky coastline which has plenty of crayfish, an essential ingredient. The huge pot into which species of whole fish are placed, as well as crustaceans, goes to serve ten people. As I was dining alone I would not be trying it that today. Bouillabaisse, which translates as boil and lower (simmer), owes its special place among fish soups to the provenÃ§ale herbs which flavour the broth. Patrick adds these last.

It may be of interest at this point to recount the tragic story of the man after whom the restaurant is named. Vatel was one of the most famous French chefs of all time. Distraught at the late delivery of seafood for a banquet he was preparing for King Louis XIV he quite literally fell upon his sword. Kindly do not expect M. Berenger to do the same thing if your bouillabaisse arrives a tad late!
And so to dinner. I chose the prime location, next to a glass casing behind which was a tropical garden and a wall down which a simulated waterfall flowed. Now I knew I had come to a French establishment. The table was set very comme il faut (in the way it ought) with knives dutifully placed each side of the place mat and bright glasses too â€“ two for wine, two for water. French pop music of the 1960s was gently playing in the background.
It is comforting to know you can rely on a little French sauciness to liven up even that most plain and simple of snacks â€“ poached egg on toast. The sauce in question is called meurette. M. Steve Baum, who was acting maitre de that lunchtime, explained to me that the ingredients were onion, lard and red wine with the addition of some chopped bacon. This was priced at VND120,000 ($5.71) and I had it for starters. I might well have gone for the gazpacho with orange blossom (this is iced tomato soup) also at VND120,000 ($5.71) but as it was Spanish I thought I would be wandering off the subject. Other options for an entrÃ©e include sahshimi with sesame seeds, prawn cocktail with jackfruit salad and sautÃ©ed duck livers.

The ground floor of the Vatel.
Photos: Vatel Saigon Bistronomique-Lounge

The main courses featuring meat cost between VND280,000 ($13.33) and VND380,000 ($18.10). They included filet mignon, brochettes (skewered meat) and lamb chops sautÃ©ed a la provenÃ§ale. There were vegetarian courses on offer for between VND120,000 ($5.71) and VND220,000 ($10.48) as well as Vietnamese dishes at between VND120,000 ($5.71) and VND220,000 ($10.48). I chose breast of chicken in cordon-bleu sauce, a creamy one with port wine and mushroom. The actual chicken came roulade style, that is to say in slices which were stuffed with bacon. It was all very mouthwatering.
I had reserved space for a sweet course. It was a toss-up: either classically French â€˜crÃªpes suzetteâ€™, which is pancakes with brandy, or crÃªme brulÃ©e. The latter won out. This dish is largely something very familiar to an Englishman, namely custard. It rounded things off perfectly.
My liquid accompaniment was an apple juice at VND50,000 ($2.38), as this was a working-day lunchtime. There are wines from round the world as well as France. To give you an idea of prices, I noted that a normal Bordeaux A.O.C. Baron de Rothschild cost VND420,000 ($20) a bottle or VND120,000 ($5.71) a glass whilst a bottle of more upmarket Paulliac from the same region goes for VND2,650,000 ($126.19).
Those seeking to dine in the manner of the Paris of the West in the â€˜Paris of the Eastâ€™, the sobriquet once given to Saigon, now know of one place to do so. I shall not forget how keen to learn the secrets of French cooking and serving the Vietnamese students at Vatel were. I have no doubt they will spawn other excellent places to savour the cuisine of la belle France. A very â€˜bon appetitâ€™ to all who dine at Vatel and to all our readers indeed!n