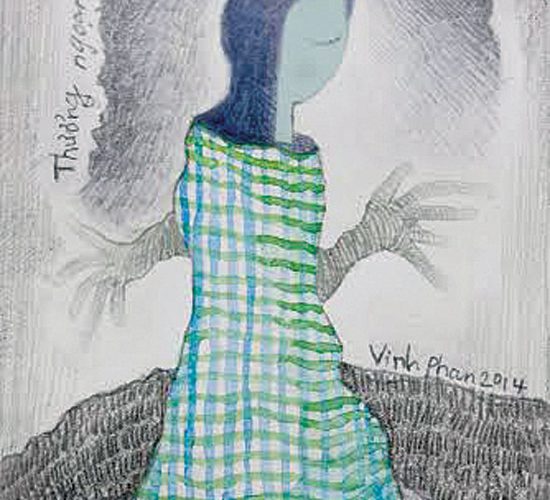 The two-eadged sword of chastity

Just as women’s roles in matriarchal and patriarchal societies are completely different, so is the notion of virginity.
Matriarchy in Tay Nguyen highland tribes means that property ownership belongs to women. Women initiate their own marriage, and in many tribes, men live at their wife’s house. However, men’s role is not insignificant, because they are the main labour force, warriors and village elders, which means they decide the dynamics of the community. Maybe that’s why they had a custom whereby, when the eldest man in a family dies, a younger man in the family has to marry his wife, so she can’t leave and take away what she owns. Otherwise, the other men may have to leave the house. In the Dam San epic, following this custom, Dam San had to marry the sisters H’Nhi and H’Bhi, his grandfather’s wives. Although both of them were about his age, he was frustrated because there was no love. We still don’t understand this custom completely.
To the Kinh (Viet) people, the role of the first daughter-in-law is very important. It is to continue the family line and keep peace in the family and community. She owns nothing, but after having a son, she becomes the executive in the family. Chastity is therefore her highest virtue. Morality, happiness and success of future generations depend on it. And so, in choosing a bride for their firstborn son, the Viet strictly follow the rules and rituals that Confucianism defined and imposed upon women’s lives. Extramarital pregnancy was a crime, persecuted by the village. The harshest punishment for the sinner was to be tied naked to a banana raft and thrown into a river.
Looking deeper in to history and folk stories, we see that ancient Viet did not have the notion of chastity. There are plenty of examples of bastards who later became saints. Thanh Giong’s mother conceived him just by stepping in a giant foot print. Monk Khau Da La made a young girl conceive just by unknowingly stepping over her. There are also many stories about freedom of sex; the most typical is the story about how Princess Tien Dung by chance met naked Chu Dong Tu on the sandy beach. In Da Hoa temple, which is devoted to them, we learn that he even had a second wife. The Muong people, our nearest cousins, don’t have the notion of virginity, at least theoretically. Muong chieftains have many wives, and when one chieftain visits another, the host often orders one of his concubines to make the guest feel at home. This sounds so foreign to the Kinh (Viet) ears. A Muong house, without partition, shows that sexual activity has only one purpose, which is to spread the seed. Muong women have to learn to do all private tasks inside their sarong.
The virginity-related customs are hard to examine in the various tribes. Before the inauguration of Confucianism, was it important to the Viet people? The ancient Truong Yen festival even had a love-making scene between King Le Hoan and Queen Duong Van Nga on a raft. In the Rooster Festival (Phu Tho Province), men and women, dressed like hen and cock, do a chicken copulation show. After that, during the day, they are free to have sex. There are many other similar traditional festivals. It makes one question the depth of Confucianism’s penetration into our villages during the feudal era. We think that these customs have existed only since the 15th century. During 500 years of existence, it has carved some order and beauty in the Vietnamese family, but it also imposed harsh dogma upon women. The conflict between women’s liberation and family morality, not thoroughly studied and understood, has caused so many impasses in our society today.