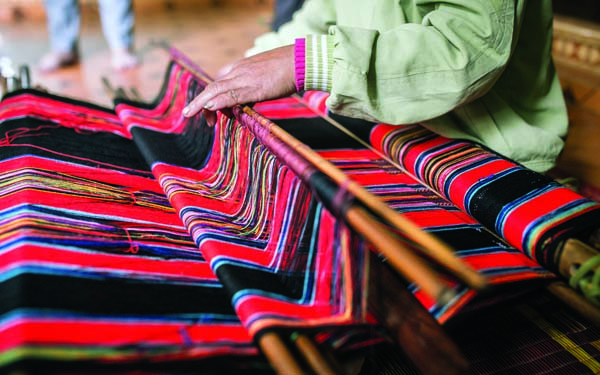 The threads of identity

Colorful threads dyed from leaves, bark and roots from the forest.

From dowry gift to ethnic badge, the zeng weaves the fabric of the highlands

According to research documents and from what I witnessed in the highland district of A Luoi, Thua Thien Province, the zeng weaving trade of the A Luoi people in general and the Ta Oi ethnicity in particular is an ancient one that has been passed down through generations.
According to outstanding artisan Ho Thi Tu, deputy chief of Dept of Culture of A Luoi District, a girl coming of age has to have some zeng ready to bring to her prospective husband’s house as a dowry on her wedding day. The amount depends on the family’s wealth: a poor family may give 30-40 pieces of zeng, while a rich one may give 90-100 pieces. The bride’s family brings the zeng to the groom’s on the wedding day. In return, the groom’s family brings buffalos and oxen to the bride’s house. Again the number of animals depends on the family’s wealth.
She added ‘A girl from a too-poor family on the wedding day may bring to her husband’s house just one piece of zeng without being disregarded. She can go on weaving beautiful pieces of zeng for other members of her husband’s family. It’s a way a woman’s personal quality is measured. So zeng weaving is a must for women and a traditional cultural feature of the life of Ta Oi people here.’
Outstanding artisan Ho Thi Tu told me, things made of zeng used to play an important role in everyday life and were highly valued by the people. Therefore most of those things made of zeng belonging to a person that passed away were buried with their owner. Only a very few things, usually a belt or a shirt, are kept by the relatives as mementos of the deceased. These endeared mementos are usually kept beneath the altar or together with the family’s precious objects, and only taken out in the occasion of spiritual celebrations.
Because of that immediacy, the decoration patterns on zeng of the ethnicities in A Luoi rarely touch sacred or spiritual topics. They reflect mostly human life activities amidst the nature, and the vast majority are animal and plant patterns.
Outstanding artisan Quynh Hoang said that among the traditional professions and skills of the minorities in A Luoi, Ta Oi people’s zeng weaving is the most advanced. Beside the language, lifestyle and customs, in A Luoi outfits and dresses are also some of the most significant criteria to differentiate between ethnicities.
Artisan Quynh Hoang remembers the recent time when Ta Oi people still preserved almost intact the traditional tools and techniques of zeng making. In the peculiar notion of the ethnicities of A Luoi, the wealth of a person is measured by the number of expensive outfits that person possesses.
‘People around here used to plant cotton in the fields in the highlands. They harvest it and process through many steps using the sun, water, fire and some mechanical devices to finally get threads. They collect leaves, barks, and roots from the forest to extract colors, which they use to dye the white cotton thread. Dyed and sundried threads are coiled into balls,’ artisan Quynh Hoang recalled.
According to outstanding artisan Ho Thi Tu, the loom used by the A Luoi minorities, especially the Ta Oi, may be the oldest in the Southeast Asian region. The looms have many components that are all made of small bamboo or wooden chunks, but are very simple, light and easily operated. While weaving, the woman can at will insert a bead or a wild fruit on the fabric to make it look even more beautiful and lively. These impromptu improvisations make the zeng so much more meaningful and significant. They help tell one woman from the others, and one ethnicity from the others.