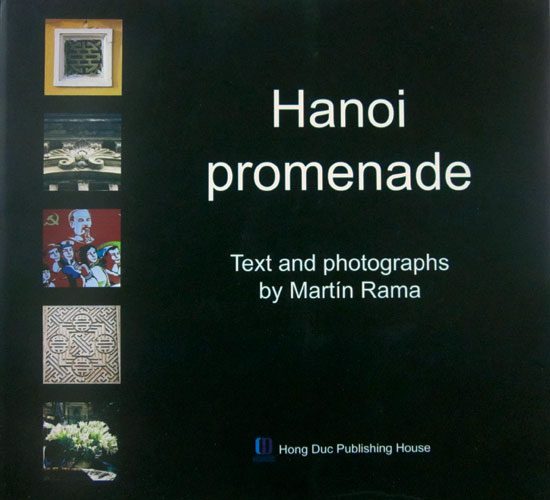 The soul of a city

‘Hanoi Promenade’ captures all that makes the capital city special

Any one who lives in a Vietnamese city never experiences a dull moment. Round every corner, down every alley way, there is something waiting to be discovered. Do look up too-not many people, for example, spot the squirrels running along the telegraph wires even far from the nearest park. I picked up a book recently that rams home the point that he/she who is tired of Vietnam is tired of life. It consists of sections that focus on details of architecture, nature and daily life. It terms these the ‘ingredients’ that make up a dish called Hanoi. This photographic book may have the look of a slick coffee table tome, but in fact it educates; it teaches observance.
The title of the book, ‘Hanoi Promenade’, suggests a stroll through Hanoi might be as healthy and pleasant as a walk along an English beach front. However, the author does acknowledge the hectic bracing nature of the Hanoi streets with a section entitled ‘Chaos’. There are photographs of the Gordian knot enmeshment of overhead cables, bustling street markets, congested pavements, ugly building sites and messy streets. Yes, author Martin Rama paints Hanoi, warts and all.
Until I came across this book, I had never fully appreciated the variety of design there is in such everyday urban things as balconies, doors and windows, ironwork and tiles, each of which has its section showing you that in Hanoi, these are all as individual as human faces.
Peruse this book and you will have a better understanding of Hanoi’s thousand-year-history. There are sections on mansions, places of worship, facades of French-style villas, bold concrete block structures of the Soviet Era, and the Beaux Art style of architecture of the turn of the twentieth century with its stuccos imitating Corinthian columns and floral arrangements. Of course, Hanoi is also a jewel of Art Deco. The book explains the popular movement of the thirties and forties and illustrates its elegant presence in the city. There is also a section on Indochine-style edifices that synthesise French and Vietnamese influences. There is plenty of accompanying authoritative text, which if you read, it will soon qualify you for a certified tour guide.
Think Hanoi and you also think ‘water’. Hanoi is a city of lakes and is flanked by the Red River. There are snaps of life and human activity along the river and homage to the city’s central iconic Hoan Kiem (Lake of the Restored Sword). Another section on Mother Nature celebrates the gardens and parks and tree-lined avenues of one of Asia’s greener cities. As the writer points out, this is not just French influence. Hanoians were adorning the city with bonsais long before they arrived. The author also writes of irrepressible nature manifesting herself in moss on decaying buildings and small trees to be seen sprouting from crevices and cornices.
Of course, besides brick and stone, a city is its people. Think Hanoi and you think of the ancient quarter with the thirty-six streets, each dedicated to a particular trade. Rama, the author, has lovingly caught the artisans at work and their wares with his camera lens. Shopping, too, has not escaped him and let us hope his snapshots of sellers riding bicycles and cyclos dwarfed by the wares they are laden with do not soon become a testimony of a bygone way of life. Hanoians are also depicted at leisure and play-men grouped around a game of mah jong, people seated on plastic chairs enjoying a street snack, young lovers snuggled together on a motorbike parked overlooking a lake. Rama photographs all the things that anyone takes away as a memory of a sojourn in this city.
Yes, do buy this book as a present for the relative who sadly could not make it to Hanoi. It is much better than a T shirt. And yes, this book does make a good souvenir to be taken down from the bookshelf years after your visit to help you to reminisce. More than this, it is an analysis of what goes to make up a great Asian city. And more than that still, it is an educative guide on how to read any city.
‘Hanoi Promenade’: Text and photographs by Martin Rama is published by Hong Duc Publishing House. The Vietnamese version of the book won the 2014 Bui Xuan Phai award of the Ministry of Culture.n