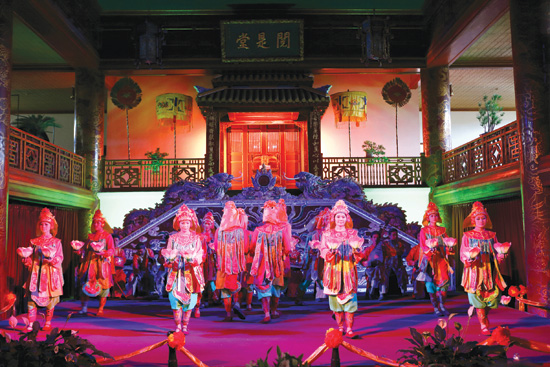 The songs heard around the world

As opposed to the vulgar music of the common folk, refined music is the proper music, or distinguished, elegant music, specially composed for the Royal court of countries influenced by Confucianism, such as China,Vietnam, Japan, and Korea. The formation and development of the court-refined music of each country has its own unique features. Vietnamese refined music began to form with the very first monarchy of the Ly Dynasty (1010-1225.)During the era of the Nguyen Dynasty (1802-1945), refined music made long strides toward perfection. Nguyen court-refined music is the culmination of academic music, reflecting the aesthetics, philosophy, knowledge and vision of cosmos, life and society of the Vietnamese people through time.

Nguyen Kings selected the best instruments of the country to add to the court’s orchestra. There was a ‘Big orchestra’, consisting of 42 instruments and ‘Small orchestra’ of 8 instruments. Which one performed depended on the occasion.

Refined music is rich in tunes, which are gleaned and filtered from strong and optimistic melodies of the North and soft and profound ones of the South.

When playing, each instrument of the orchestra has its own role in the overall accord. None is drowned out by the others. In the entirety of a musical piece, one can distinguish each and every instrument’s part. Some are graceful, some pure, some urging, some comforting, some elevating, some melancholic.

The peaks and troughs

Since the early 20th century, the world has already known quite a bit about Hue court-refined music. The Museum of Man (Musée del’Homme), Guimet Museum, Museum of France Overseas (Musée de Franced’Outre-mer) and Radio France stored and played many albums of Hue refined music and songs.

When the last monarchy of Vietnam fell in Aug. 1945, the court entertainment and refined music also fell to ruins. In 1949, when the ex-King Bao Dai was reinstated, his mother Madam Tu Cung tried to restore the Main orchestra and the Song and Dance Troop. The Main orchestra lasted only about 4 years, but the Song and Dance Troop was maintained until today. One can say that it was Madam Tu Cung (maiden name Hoang Thi Cuc) who had saved the Nguyen court-refined music, songs and dances.

In 1981 in Hue, having seen the act “Baby unicorn being born” in a Hue royal musical show, the head of UNESCO Mr. Amadou Mata M’bowre marked, “I’ve never felt so deeply moved at the sight of a unicorn dance.” In 1994, all the UNESCO delegates at the International Conference on Hue cultural heritage gave a long ovation to appreciate a show program of the Big or chestraand the Refined court music orchestra of Hue. In 1995, World Culture House published 2 CD’s of Hue songs, Hue refined court music and Hue traditional Buddhist music. The journal Le Monde de la Musique said that they “shook” the world. On November 7, 2003, UNESCO officially recognized Nguyen court-refined music as one of 28 masterpieces of intangible unwritten heritage of mankind.