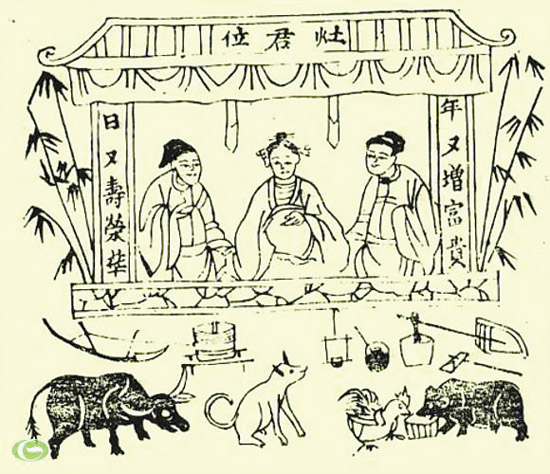 The Kitchen Gods return to the heavens

On the 23rd day of the 12th lunar month [23 January, 2014], every household from North to South conducts a ritual to send off the Kitchen Gods to the Heavens. Only after that, on the 25th of the 12th lunar month, do the community houses, shrines, and temples perform a ritual to see other deities off on their return to the heavens.
In former days, come the end of the year, people went out into the fields to dig up clay and mold it into three new Kitchen Gods that were then taken out to dry in preparation for the replacement of the three old Kitchen Gods. There are two ‘Kitchen Gentlemen Deities’ and one ‘Kitchen Mother’ (Ong Tao Cai) or ‘Kitchen Goddess’ (Ong Tao Chua). The latter’s special distinguishing feature is a one or two-centimetre deep sunken navel in the center, about one third of the way up from the bottom.
The old Kitchen Gods set is taken out and left outside at the foot of a banyan tree beside the village shrine. They become ‘Kitchen Ghosts’, and now dwell together with lime jars, the bowels and mouths of which have been filled such that no more lime can be stuffed in any more (the lime is for eating with betel). Both of these two discarded items become sacred, and the world is graced with incense.

From legend to belief
In Vietnam, the myth told about fire is a simple story that tells of an old man who serendipitously steals a bit of fire from the Fire Goddess (Ba Hoa). But when he took it home to use for cooking, he unintentionally set the house on fire. The people rushed to put out the flames, and the fire was completely extinguished, so humankind no longer had fire to use. The fire deity is seen as a vicious spirit that causes horrible conflagrations. The goddess is worshipped in shrines so that she does not cause fire disasters in the community. In contrast to the Fire Goddess, the God of the Hearth (Than Bep) or Lord of the Hearth (Tao Quan) is a fair and righteous god, whom custom holds is an auspicious spirit and protector of children and livestock.
Legend also tells that in ancient times, there were a husband, Trong Cao, and his wife, Thi Nhi, who loved one another very much. Yet they were saddened that, though they lived together for a long time, they had not had a child. Moreover, the husband often had an irate disposition. One day, in a fit of rage, the husband struck his wife. Thi Nhi, with sunken heart, abandoned the house and went to another land. There, she wed another husband, Pham Lang. The newlyweds were very happy. One day, Trong Cao, on the road to look for his wife, came and knocked on the door of Pham Lang’s house. At that time, Pham Lang had gone hunting. Thi Nhi recognized her former husband and received him warmly. Trong Cao, well fed and drunk, rolled over and fell asleep. At that moment, Pham Lang came home. Thi Nhi, not wanting her new husband to learn about her former life, immediately hid Trong Cao in a haystack outside in the garden. That day, Pham Lang had caught a big animal so, when he returned home, he threw the animal on the haystack and then set it on fire to parch the meat. The haystack flared up fervently for a while before Thi Nhi knew what had happened. In anguish, she jumped into the blazing fire. Pham Lang, unclear about what had happened, ultimately lost heart and he, too, cast himself to die beside Thi Nhi. The Jade Emperor (Ngoc Hoang), moved by the piteous scene, made them Kitchen Gods. Precisely because of this, the set of three Kitchen Gods includes one Goddess and two Gentlemen, and the image of the three Kitchen Gods likewise consists of a woman sitting in the center with two gentlemen sitting beside her.

The Kitchen God returns to heaven
According to Dang Huy Tru, ‘The Kitchen Gods in the Heavens are stars that assist the Five Emperors, who are credited with teaching the people how to fish, raise livestock, cultivate agriculture, and cure diseases. Beneath the earth are deities that watch over the destinies of all people. That the Kitchen God was born on the 3rd day of the 8th month is still recorded in the book Luc tang ton kinh (‘Sutra of the Six Underworld Venerable Ones’). The Kitchen God concentrates on jotting down the good and evil in the human world and, on the last day of every month and the 24th day of the 12th lunar month, takes the affairs of the mundane world up to report to the Celestial Yamen in order to determine disaster and felicity.’
The Kitchen God, generally speaking, besides his function as the ears and eyes in the mortal world for the Jade Emperor, is the Fate-arbitrating God of the household, who stands foremost before the five household deities (Ngu Tu) of the Kitchen (Tao), Well (Tinh), Gate (Mon), Home (Ho), and Domestic Space (Trung Luu). He is referred to as the ‘First among Lords’ (De nhat chi chu). Among common folk, the Kitchen God’s functions include protecting children and livestock. For this reason, formerly, parents often customarily consigned their three, six, nine, and even twelve-year old children to the Kitchen God by selling them off to him. When they went out on the road, they scrapped soot from the Kitchen God with which to mark a cross on the children’s forehead, or they smeared soot from the Kitchen God on their foreheads, essentially so that the children would be rendered ‘ugly.’ This they viewed as guaranteeing the children’s safety.

A Dong Ho painting featuring a child hugging a carp which traverses the river,
goes through Rain Gate, and becomes a dragon to carry
the Kitchen God to heaven. Photo: Nguyen Ba Ngoc

When people bought a dog or cat to take home and raise, the first matter of business was to make the animal prostrate before the Kitchen God. People plucked a little fur from the animal’s feet and tail and stuffed it under the Kitchen God’s rear, essentially as a magical means of keeping the raised animal from getting sick, wandering off and disappearing, and, if it did get lost, to always come home to its master.
People truly believe that the Kitchen God begins his journey to attend the celestial audience at midnight on the night of the 23rd or at daybreak on the 24th of the 12th lunar month, so the ritual to send him off is usually held early on the 23rd.
At the end of the month, business up in the heavens is finished. Thus, on the last day of the 12th lunar month, people pray to welcome back the Kitchen God on his return to the family. The offerings for the Kitchen God are normally lanterns, tea, fruit, confectionaries, and bean compote. In the South, sweet candies are prevalent. Many people who are scrupulous in making oblations to send off the Kitchen God use things that are entirely vegetarian, essentially so that he will be purified and will not dare to speak ill of the head of the household.
One obligatory offering that is made is a vehicle of transportation for the Kitchen God. Up in the North, carp are offered: The carp traverses the river, goes through Rain Gate, and becomes a dragon to carry the Kitchen God to heaven! In the South, prevalent is a set of offerings printed on paper in the form of a stallion and a crane with spread wings (on the road, the Kitchen God rides a horse, but once up in heaven, he rides on the back of a crane). The wood-carved picture ‘Flying Crane, Galloping Horse’ is a variation of the Daoist ritual of releasing horses and cranes (i.e. burning votive paper images of horses and cranes) and a similarly prevalent ritual in Buddhism, in which they are messengers that carry petitions to the abodes of the myriad Buddhas in all directions and to the Underworld and the Dragon Palace beneath the sea. Another indispensable oblation is new clothes (made of paper) so that the Kitchen God will be smartly and neatly dressed when he attends court for an audience with the Jade Emperor. Peculiarly, this set of clothes consists only of the upper garment.
To this day, the creed from which this peculiar affair derives cannot be traced. The thing is that there are places in which the Kitchen God receives a new cap and shoes. The cap is a ‘dragonfly-winged cap’, like that of an Nguyen Dynasty mandarin, and the black shoes resemble the mandarin’s boots. In the old ritual, the cap and boots were replaced yearly with new ones. The old cap and boots were taken to be burned to send off the Kitchen God. These objects are still produced and sold today.
There are two old customs that seem to contradict one another; one is the custom of maintaining the sacred flame by banking with rice husks so that the fire does not die out, and the second is the ritual of creating a new fire by replacing the three Kitchen Earth/Hearth Gods every year. The ritual of new fire in Catholicism, conducted on Easter night, and that of Shinto (Japan) corresponds to the New Year ritual. These two datum show that the Vietnamese custom of replacing the three Kitchen Gods with new ones every year implies that the significance of the ritual is purification and regeneration. Broadly speaking, Tet is a new year, a new fortune, a new cycle, and a new flame.
The Kitchen God is seen as the spirit at the head of other deities worshipped in the household and he is deferentially referred to as the ‘Foremost Lord of the Household.’ This is because the kitchen stove possesses a special and important role in relation to mankind. Just look at the position of the kitchen in the Highland ethnicities’ long rows of houses or in the homes of the ethnicities in the Northern mountainous regions and it will be clear just how significant it is. The kitchen stove symbolizes life together, the family’s warm roof, the relationship between men and women, love, cooperation, and sustenance of the fire. The kitchen stove is like the sun: it brings people close together and gathers them around because of its warmth, heat, and light. In other respects, the kitchen is the place where food is cooked, so it is the center of life; it is from the kitchen that life is granted. Precisely because of this, the kitchen is revered by nearly all ethnicities. The kitchen was the first ‘worship hall’ of humanity. There, people prayed for God’s and the ancestors’ protection. It was a place of worship; the fire blazed like a hallowed gateway for humans in the world of dust to the sacred realms high above. With the passage of time, the Kitchen God was apotheosized as the King of the Hearth.