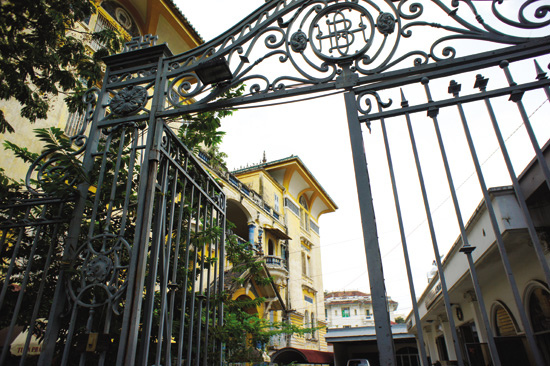 The house of ‘Chu Hoa’ became the city art museum

Vietnam Heritage, March 2011 — At the Ho Chi Minh Fine Art Museum, my friend bombarded the iron fence with camera shots. He said, ‘Only the iron fences of some big villas built during the French colonial period can compare with this.’ He pointed to lithe designs and sturdy and artfully welded knots, which, he said, had not changed since 1925 [when the house was built].

Detail of the front gate

The letters H, B, H were interlaced and set in an oval, as the symbol of the building and its original owner, Mr Hua Bon Hoa, who was called ‘Chu Hoa’. He began as a poor seller of thrown-away bottles and eventually built such landmarks as the Hotel Majestic, Tu Du Hospital, Emergency Centre of Saigon, Town Hall and Ky Vien Temple, as well as apartment buildings for rent all over Saigon.
When we visited recently, a hall displayed paintings and statues of different styles and schools. An exhibition of mainly cubists was on its way.
On either side of the hall, along corridors and on the second and third floors were exhibits by theme and era. There were ancient objects from the south, including Buddhist statues, and religious objects of terracotta and bronze. Then, much more recent mother-of-pearl-inlaid wooden objects, lacquered wooden objects and painted enamels. Vernacular works of highland ethnic peoples had their own hall and included funerary statues, farming and household implements and musical instruments, including gongs.

The lift well and staircase and a walkway between exhibitions

Off the main rooms on the second and third floors were oil paintings, lacquer pictures, silk pictures and watercolours from a period following 1925, when the Indochinese College of Arts was founded in Hanoi and Vietnamese modern art began.
In the South, from the beginning of the 20th century, the French were interested in training in manufacture and decoration, including woodwork, bronze-casting, stone-engraving, pottery, rattanwork and bamboowork. They founded the Thu Dau Mot Art School in 1901 and the Professional School of Bien Hoa in 1903. The latter was upgraded to the School of Indigenous Arts of Bien Hoa in 1913. In 1922 came the School of Drawing and in 1940 the School of Applied Arts of Gia Dinh, in present-day Ho Chi Minh City. Pottery, sculpture, paintings, bronze-casting and handicraft from Saigon and neighbouring provinces were shown at the latter school.
In the next gallery were statues in sandstone and wood from the Oc Eo culture. In a wooden Sakyamuni Buddha from the 5th century, myriad weathered furrows followed the grain. The statue was excavated from silty soil in the southwest.

A wedding shoot in a cloister

The back gate, opened to Le thi Hong Gam Street. It was documented that the land consisted of three blocks and a surrounding large park and was nearly 9,500 sq. m. The building itself Fine Art Museum, with the address 97 Pho Duc Chinh Street, was one of the three blocks and had an area of 3,716 sq. m. The basement had private art galleries.
All windows had three horizontally swinging sashes, the inner glass with flower designs, middle wooden louvres and outer iron. My friend turned the cast-iron handle of a glass window with flower designs, making iron rods enter holes top and bottom of the frame.
The ventilation provided by the sophisticated windows was supplemented with numerous vents with iron bars. Air-conditioning was avoided.

I said, ‘This building was built in the Baroque style – the architectural school of Europe in the 16th century that inclined to decoration and curvature.’ My friend said it was only ‘the air of the Baroque’. Temples, pagodas and traditional royal palaces, had also [possibly autonomously] reflected the importance of curvature and used roof-top statues and reliefs with flowers and leaves, dragons, unicorns, tortoises and phoenixes, inlaid and employing porcelain. Perhaps the palaces, temples and pagodas, as well as the royal tombs in the old capital, Hue, could be called the ‘Viet-Baroque’, part-Baroque, part-Renaissance and part-Asian.
The more I looked at details, the more I thought the building represented the original owner, an Asian. The roof had tiles with indigo edges and was decorated with yellowish brown tree branches, leaves and gourds.
From the iron entrance gate, the stairs to the front door were an imposing block, balanced and charming, rare in the city. The roof of the stairs was supported by Roman pillars with an Asian indigo glaze. At the foot of the stairs was a semicircular aquarium on geomantic principles.