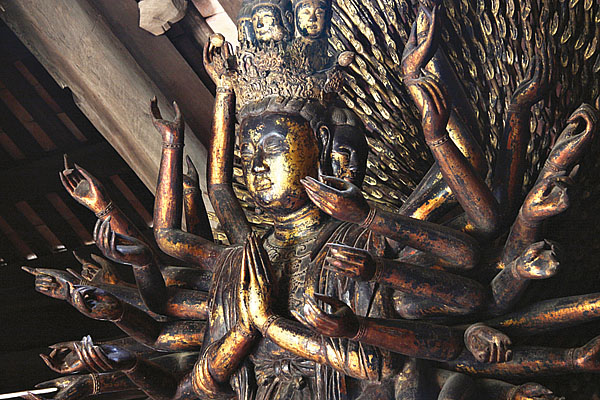 The genius of Truong

admin9 December, 2019
Art0 Comments 0
The Bút Tháp (pen-shaped stupa) Pagoda in Bac Ninh Province in the northeast, built in late 17th and early 18th century, is an integrated group of artistic works in architecture and sculpture of the classical style. Besides the world-famous statue of the Avalokitesvara Lady Buddha with one thousand arms and one thousand eyes, a masterpiece by master-sculptor Truong (the only ancient sculptor in Vietnam with his signature on his works), there is also a whole gallery of hundreds of wonderful statues painted in vermilion and gilt, mostly done by the genius of Master Truong and his collaborators.
This is a unique school of sculpture with strong influence on Buddhist art in the plains of northern Vietnam during the next two centuries. The stylistic beauty of an idealised formal model and a realistic human figure is so rare that the sculptures of Bút Tháp Pagoda become a national treasure of Vietnamese art.

The realistic nature of this style is most prominently shown in the portraits of the personalities of veneration in this place. They are the founding and main presiding monks of the pagoda, the queens, princesses and noble ladies of the court who contributed to the building of Bút Tháp, and also the royal female members who became nuns in the pagoda.
In the red-brown wooden altar, sophisticatedly decorated but not overly mannerist, there is a royal woman clad with the gentle robe of a nun. Her posture is solemn, with a face ‘as serene as a lake in autumn,’ without any expression of profane feelings.
But behind that simple and soft costume there is magically appearing a young and exquisite body of a beautiful woman. Her face like a flower and her white-powdered skin is truly benign and graceful, if somewhat selfconscious. The onlookers could only feel some regret that such a young and pretty creature so early abandoned worldly existence to live in a monastery.
Simple colours and supremely elegant features are seen in this work. The coloration has the hidden grace distinctly Vietnamese of which silk-painter Nguyen Phan Chanh may be the only follower in the 20th century.
The second portrait is more colourful, and her costume is more sumptuous and splendid. The girl in this case is more perspicacious and clearly a great beauty of the country: an oval face, the lips rounded into a faint smile, the lovely eyes, the brows like ‘the mountains in spring’.
Even with all the standards of an ideal beauty, we can see that it is truly the portrait of a concrete young woman from the village but belonging to the court. A surprising discovery: this is the Heavenly Mother in the pantheon of mediumship in the back of the pagoda after the principle of ‘the Buddha in front, and the Mother in the back’, combining the worship of the Buddha and the native cult of the Mother Goddess.

The profanised and personalised aesthetic attitude of Master Truong, of the school of Bút Tháp Pagoda, is audacious. Does it also reflect the ‘democratic spirit in the village’ of Vietnam in formation during that period of time?
The painted and gilt statues are only accomplished when ‘the eyes are marked’ – the drawing and painting as well as the coloration are as important as (if not more important than) the plastic work. It is regrettable that these goddesses’ statues were repainted entirely wrongly in a restoration more than a decade ago, doing terrible damage to the heritage of Bút Tháp Pagoda art