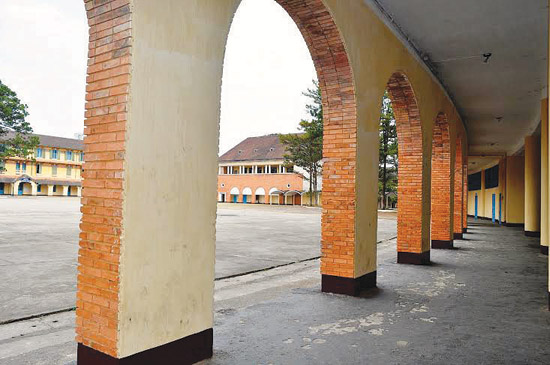 Unique among its peers,
Pedagogical College
of Dalat stands
throughout time

Dalat is the only town in Vietnam which, in terms of its architectural planning and design, can be said to be European. The design includes thousands of villas, edifices and public buildings, among which the most notable is the Pedagogical College of Dalat.
Years ago, seeing a calendar with a picture of a big lake and a tower behind a grove in the background, I thought it was something half the earth away. But the caption said it was a corner of Xuan Huong Lake in Dalat. The miraculous tower reflecting in the ‘lake that blinks thousands of golden leaves’ sung about in a song by Trinh Cong Son urged me to come to the ‘streets of the highland’ to see it for myself. Ever since then, I visited the college every time I came here.

This time, I rented a motorbike in the Dalat central market, cut the wind on Ong Dao Bridge, and followed lake breezes along its Tran Quoc Toan shore to turn in to Yersin Street. Looking from the entrance of the railroad station, the tower behind the pine grove on the hill seemed to be expecting me. After passing Dalat Map Printing, which used to be the Geographic Service of Indochina, I was at the gates of the college. The two-storey office building’s façade is lined with solemn white column. Under the Mansard roofs, there are strange round air gates unlike any other school office in our country.
Walking down the corridor under a wavy roof, I came to a large pine shaded court. From here, I could again contemplate the nearly hundred-metre-long red building, curved like an open book with a gigantic pen in the middle, pointing up to the deep blue highland sky.
In the year-round cool climate of Dalat, the building’s red colour creates an enthusiastic and warm feeling, making it even more splendid without feeling hot as in other areas. It was truly a reasonable choice by maestro architect Paul Moncet, who designed and led the construction during the late 1920’s. He was also a co-creator (together with architect Revéron) of the cog railroad station, another famous landmark of Dalat.
On the ground, there are 16 Roman arch entrances with a line of square columns running along the curved corridor, which add grace and support two upper floors with 24 classrooms. The corridor on the floor above is lined with paired white cylindrical columns, which stand out against the red walls. The top floor has white doors with round air gates on the sides that look like mischievous eyes looking back at visitors. These doors remove the monotonousness, adding glamour to the building’s front side. On the back side, the whole ground floor is covered with glass windows, which make it look luxurious like a trading centre and keep the classrooms both warm and bright in cool misty weather without wasting electricity. According to photos taken in the late 1960’s, there was a spacious court behind the building, surrounded by a beautiful pine grove, which has now been replaced by a chaos of jostling houses.
Apart from the main building, on the sides of the court are buildings blocks that house the library and labs. Student dormitories are hidden in a pristine pine forest, behind which there is a stadium for teachers and students to play sports. The original eight ha area may be too big for a school. Perhaps in the early XX century Dalat was still a primeval region, which allowed its builder the full freedom of imagination.
Every time I stand in this court, I am mesmerized by the buildings, strong as a castle and magnificent as a palace. So many times I have asked myself why I love this school so much. The answer is not difficult; it is because this is a work by a man with talents. But without the vision and commitment of E. Hébrard, Head of the Service of Architecture and Urbanization of Indochina in 1923 and author of the general planning of the ‘garden city’ Dalat, would a school like this which became a symbol of this city have come into existence?

In the late XIX and early XX centuries, the French built privileged high schools, such as Le Quy Don (Collège Chasseloup-Laubat) in 1874, Violet Dress School for Girls (1913), Lycée Pétrus Truong Vinh Ky (1925) in Saigon, Collège de My Tho (1879) in Tien Giang Province, National School (École Primaire Supérieure) (1896) in Hue, Lycée du Protectorat (1908), and Lycée Albert Sarraut (1919) in Hanoi. They all followed functionalism in design with a court in the middle, surrounded by functional blocks, or the blocks standing in parallel, separated by a courtyard. Functional architecture, which prioritized functionality over beauty, was predominant in the early XX century.
Yet this anti-functional complex, as the experts call it, got through. Practically, it should be arranged just like the others. Particularly, the money spent on the tower would be good for many other facilities. But then there would be no miraculous-looking school to beautify Dalat for centuries. It’s the ‘anti-functionality’ of the form, especially that of the tower, that created another functionality, that of visual art. The artistic value of the school complex was surely not a utility by itself. Admiration to those talented and incorruptible men whose remaining architectural works all over Indochina are not only a tangible legacy, but also an invaluable example of professional ethics and honour, which became even more urgent after nearly a century.
The tower seen from Palace hotel, Doi Cu, Xuan Huong Lake and almost everywhere in the city seems to say ‘Here I am,’ and ‘I am just a school, but a must-see!’ Perhaps that’s why a wine company here took the image of the school with a tower as its exclusive trademark.

Text and photos by Pho Dao