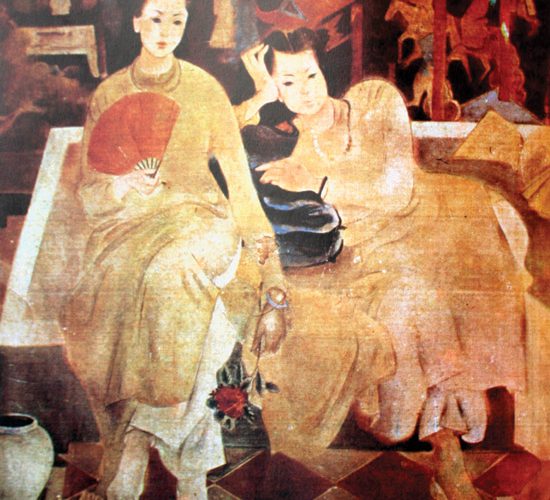 The evolution of Vietnamese silk painting

Due to the harsh weather and endless wars, a big part of Vietnamese art heritage has been destroyed. What remains are large architectural and sculptural works made of durable materials such as stone and wood. The few surviving of silk paintings are the portraits of Nguyen Trai, Phung Khac Khoan and some paintings used for worshipping. A silk painting is a painting on silk.
The Indochina College of Arts was opened in 1925. The Vietnamese artists at that time studied oil paintings and learned Western painting techniques. Few painted on silk. The tendency of silk paintings at the time was to use simple colours. Brown and black were employed for dark tones; the light was the colour of silk. The paintings were closely laid-out with big characters and little colour. In 1957, silk painting was officially introduced into the college’s curriculum. The silk itself is fragile and fine. Silk painting artists seldom used light as oil painting artists did. The light in the silk painting was created by the harmony and the nuances of the colours as well as the arrangement of the gamut of the artist. The paintings had their dynamic rhythms which evokes certain emotions, as do light and shade. The light and shade are created by the nuances of things, not by the light coming from somewhere into each object. Thanks to the use of the water-colours, the gradual change from deep to light, from dark to light, and vice versa, does not stumble; it moves slowly and tenderly, and it still brings us a tender feeling where the light and the dark meet unexpectedly. The silk painting technique in Vietnam is different from that of the Chinese and Japanese artists. The Chinese silk painting came into being before paper painting; the silk painting technique of their artists is not very different from the technique they use to do paper painting. The Chinese artists do not use a frame, but spread the material on a board as they do on the paper. In the old days, they used to draw using black ink with coloured strokes, which were rich and dynamic; shade and light, with dry strokes, then with blurred ones, here and there intertwining with each other.
The Chinese artists used to paint using ink and the colours made from soil and rock. The Vietnamese usually painted using water-colours. The silk painting techniques in Vietnam were the combination of scientific techniques from the European countries combined with the national artistic legacy. Vietnamese artists manipulated water-colours over the surface of the silk. Sometimes they wetted the silk with water before they painted with colours. Some artists even poured the water over the painting after they finished it for the dregs of the colours to be washed away before they continued. These artists had to use a frame to stretch the silk on to work instead of spreading the silk on a board as the Chinese artists did. The frame did not need to be as thick and sturdy as the one for regular cloth for oil painting, since the silk is fragile and does not need to be stretched too hard. After the silk piece has been stretched on the frame, the artist uses a broad-based pen brush to brush the surface of the silk with water to make the silk slack. In order for the silk to be painted on without getting blurred, the silk needs to be starched up. For the silk to be starched up, the artist uses the rice water taken out when the rice is boiling, blends it with some alum, then uses a broad-based brush to brush mixed liquid over the surface of the silk. When the starch dries up, the artist uses a clean brush to drip a drop of fresh water on the surface of the silk to check. If the water gets absorbed into the silk without getting blurred, it is ready for the artist to work on. After he has sketched on paper, he redraws the picture over the outline using black ink or a dark black pencil on the paper, then puts the paper under the silk for drawing. There is an advantage to drawing on a piece of silk stretched on an easel; the artist can move away from it for a check, but there is also a draw-back-the colour might drip down the surface of the silk. Two canisters of water are needed, one to wash the brush and one to brush water over the surface of the silk to keep it humidified. When he draws, the artist needs to be careful, for once painted, the colours will get into the silk fibres and make it difficult to erase. The water-colour is not like the oil paint or coloured powder, tempera or acrylic. Water-colour can be used to cover a line. Once a black stroke has been laid down, it can’t be changed into a white one.
Compiled by Le Duc Tan, using information from The Silk Painting Techniques in Vietnam, by Nguyen Thu, The University of Arts in Hanoi – The Arts Publisher, Hanoi, 1994.

Until 1930s, Vietnamese plastic arts had known no creators, aside from the silk-painter Nguyen Phan Chanh, whose name was spoken of in Europe. Some contemporary artists of Nguyen Phan Chanh, such as Mai Thu and Le Pho living in France, were also famous for their silk-paintings imbued with Vietnamese flagrancy. Other well-know artists such as To Ngoc Van, Tran Van Can, Tran Binh Loc, Luong Xuan Nhi, Nguyen Tuong Lan, Nguyen Tien Chung, Le Van De also contributed, each in his manner, to the richness of Vietnam silk pictorial art. All of them were educated in the Indochinese Fine Arts School. Its founder and director was Mr Victor Tardieu, a class-fellow of Matisse and Rouault. Mr Tardieu never compelled his students to comply with European aesthetic canons. On the contrary, he always encouraged them to return to their national source.
Over 60 years, Vietnamese silk-paintings have gone through two stages of development: prior to 1945, they used to look for the beauty in the quietness of a closed world. Since 1945, they found it in the ebullient contrast of a new forming world.
Vietnamese Silk Paintings, by Vietnam Plastic Arts Association, published by Fine Art
Publishing House 1992, Hanoi.

The first silk paintings came from China and date back to approximately the third century AD. Of course, silk paintings could have been produced long before that, but silk is not a long-lasting material. In order to keep silk paintings for long periods of time, people painted on a length of silk with natural colours and only unfolded them occasionally, which allowed them to be kept as long as one thousand years. Eventually, careers in copying paintings and archaic letters took shape, and every several hundred years, paintings and books were copied.
Artists from the Indochinese Arts School and their successors stopped using natural colours and used water-colours on the silk instead. After they had finished their paintings, the artists used paste and strengthening paper on the backs. This had basically changed the technique of the traditional silk painting. Using natural colours, the artists didn’t wash and brush the surface of the silk. With water-colours, the artist actually dyes the silk. The water- colour is absorbed into the fibre of the silk instead of staying on the surface. Using this technique, the artist has to paint wet and wash it several times.
Formerly, painters used to appeal to deep shades, but present-day silk-paintings are created with vivid and contrasting colours. While canvas and wood are used as background for oil or lacquer paintings, which can be covered with paint, the background for silk-paintings are often not covered throughout. Even if they are covered throughout, the expressiveness of paintings is revealed by the fineness and glossiness of silk. Silk fibres are nearly intact, as if each fibre is tinctured to be woven into a picture. The silk itself constitutes a source of inspiration for the artist.
The glistening and fanciful nature and the various nuances will become more precise than with dry painting. However in the technique of wet painting, the various colours will dissolve on the surface of the silk, creating a dark grey colour, which makes the silk become dark. With modern silk painting using the wet technique, the longer the paintings are kept, the darker they become. Another problem with this technique is that the strengthening paper and paste used on some paintings decays and destroys the paper and silk after a few years.

There are several silk paintings in the Vietnamese Museums of Arts which are just about half a century old but already in danger of breaking into pieces.
The technique of the ancient painting is symbolic and does not describe things as we actually see them. The modern silk paintings are realistic. The artists try to describe the three-dimensional space with mist, smoke, vapour, and natural sights with varied nuances. The modern silk paintings have a steady poetic quality, and the artists usually try not to use bold contrastive colours whereas the artists in ancient times used a lot of blue.
The young artists who learn the modern silk painting technique find it difficult to manifest their present state of mind. They are required to create blurred paintings devoid of contrasting strokes. It takes a few weeks to finish a piece, but the effect is not as strong as with an oil painting. The sale price is also lower, therefore many artists are no longer interested in silk painting.
* Phan Cam Thuong is a well-known art critic.

A silk painting
by Nguyen Tuong Lan, 1943.
Published in the Fine Arts of the Capital Hanoi in the 20th century, Quang Phong, Quang Viet, 2000, Hanoi, Fine Arts Publishing House.Photos: From the archive of Phan Cam Thuong and Nguyen Anh Tuan