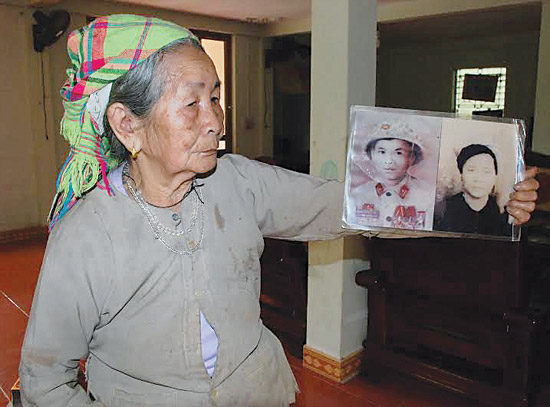 60 years ago, tens of thousands of women from all over the country followed troops to Dien Bien Phu in the northwestern mountainous region to clear paths and transport food and ammunition to the front.
I met two of them; both carried rice for their husbands who fought. A few years ago, I still saw Mrs Hoang Thi Tu (who died in 2011), a Tay ethnic of Thuong Bang La Commune, Van Chan District, Yen Bai Province. She served food and ammunition to the Vietnamese communists beginning in 1951.
Her previous husband was Mr Lo Van Nghi, who joined the army in 1947. She had stayed home to take care of their parents. She had no duty to join the fight, but hearing that he took part in the Dien Bien Phu campaign, she volunteered to join the labour force, hoping to meet him.
From late 1953 till the end of Dien Bien Phu battle in May 1954, she carried rice and wounded soldiers back and forth. She carried rice from Thuong Bang La through the Lung Lo pass to Phu Yen, and then carried ammunition from there to Co Noi. The women moved at night to avoid the enemy’s air raids. They were bombarded every night. The forest burned, but the flow of supplies never stopped.
At that time, there were no shoes. In the winter, their chapped feet coated the rocky paths with blood. After transferring ammunition to Son La, they carried wounded soldiers on the way back. Four women took turns to carry one soldier.

She said, ‘I volunteered to join the labour force, hoping to meet my hubby. I met him in Hoa Binh, on the way to Dien Bien Phu. We had only a few hours together. Mr Nghi died during the first assaults to Dien Bien Phu.’
The second woman I met was Mrs Ha Thi Nom, who currently lives in Cat Thinh Commune, Van Chan District, Yen Bai Province. She was weeding in the garden when I came to her house. I asked her about her time carrying supplies to the front. She shook her head, ‘Oh heaven, it’s a very long story. I can’t remember everything after all those 60 years…’
Mrs Nom was from Thuong Bang La Commune, married to Mr Ha Van Viet from Binh Thuan Commune. Their three-year-old son died while Mr Viet was fighting as far away as in Lai Chau.

In pain of her loss, she volunteered to join the labour force to the front line. First, she carried ammunition to Sam Nua for those who were fighting in Laos. Then, she carried ammunition for the Dien Bien Phu campaign. The ammunition depot was at the foot of the Lung Lo pass, at the top of a long steep slope above the motorway. Every night, when a lorry came with cases of ammunition, she and her comrades took turn carrying them up to the storage.

She said, ‘Heaven knows why I was so strong then. We carried 40-50 kg bullet cases all night long. I stumbled and fell sometimes. I stood up and moved on, but I never dropped the cases.’
She firmly believed that she would meet her husband on the war paths. In the darkness of nights, she listened to the voices of the soldiers marching, trying to catch his, but never succeeded. After the end of the Dien Bien Phu battle, she looked for those who joined the army together with him to ask of his whereabouts, but nobody knew anything. Only a year later she learned that he had died. ‘They said he died in Nam Khat. I don’t even know where Nam Khat is.’