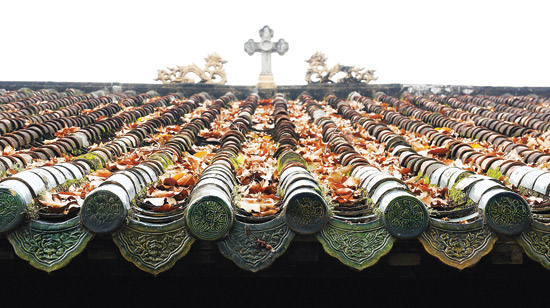 Many of us will have passed by the imposing French architecture Archbishop’s Palace on the corner of Nguyen Dinh Chieu and Tran Quoc Thao in HCMC’s District Three, admired its facade and then given it no further thought. Most of us not being connected to the Catholic faith would have thought it a private business and not entertained the idea it might be worth more than just a photograph and arranged to visit it. Before I went, I naturally tried to cull as much information as possible. My first source was my Saigon friends, colleagues and students. Many had never heard of the place and none knew much about it. The ‘Lonely Planet’ edition for Vietnam strangely makes no mention of this icon of the French quarter. The internet has scant information but I did glean that here, reputedly, is Saigon’s oldest building. I took that to mean the imposing edifice on view from the street. Happily, my visit proved this not to be the case and I was able to unearth some information for you which is now to be published for the very first time.
The offices for the administration of Ho Chi Minh City diocese are housed in a large, new building behind the one seen from the street. I had no trouble finding the public relations office to which I had phoned ahead for my visit. A kind lady introduced me to the ‘Keeper of the Archives’, Father Andrew (Tran An Hiet) who held the keys both literally and figuratively, as he was to my guide. The archivist needs to be quite a linguist, as documents are held in Latin, French, Italian, English and Vietnamese. Father Andrew, who studied canon law at the Vatican, was eager to practice both his English and French with me. He asked me how strong the church was in my country. ‘Well, the English are all culturally Christian,’ I replied, ‘but not so many attend church on a regular basis.’ I was blushing, as I know in Vietnam, church services are fully attended and when I have been at Christmas they brim to overfilling onto the streets. Father Andre replied, ‘here we are a minority but we are strong.’ He attributed this strength to having suffered martyrdom in the early years soon after the oldest house was occupied to the tune of 130,000 adherents. This occurred mainly during second half of the rule of Nguyen Emperor Minh Mang, from 1831 until 1841, when the religion was outlawed. I checked on the gruesome story of the Vietnamese Christian martyrs on the internet and can tell you the figure he quoted lies at the lower conservative end of the official Vatican estimate.
We trundled down the stairs and out to a corner of the precincts where the ‘oldest building stands’. The building itself is not particularly outstanding. It is a typical traditional Vietnamese house, such as you can still now see in the countryside or even transposed from the villages, in order to add cultural atmosphere in the grounds of hotels and dwellings of the wealthy. It is one-storeyed, with a low, sloping tiled roof and with an interior structure of black wooden beams and rafters. Originally, it was a residence with just a corner for the private worship for the priest, but now it has been converted into an exquisite chapel with an altar, upon which stand statues of the holy family as its centrepiece. Mass is held here on a daily basis.

I returned the following day, as Father Andrew had promised to prepare for me in English a summary of the research he has personally done on the origins of the chapel. At his request and with his co-operation, I was able to ‘polish’ the English. Father Andrew will make the handout available to all with an interest in the building.
The chapel was built in 1790 by King Nguyen Anh (Gia Long), twelve years before he ascended to the throne, on the right bank of the Thi Nghe canal to serve as the inn for Pigneau be Behaine, Bishop of Adran and Apostolic Vicar of Cochin China. It was here that the Bishop tutored one of Nguyen Anh’s sons, the Prince Canh, who lived on-site. This location is near the current Saigon Zoo. After this bishop’s death, it was upgraded with a tiled roof and served as the inn for missionaries, eventually becoming the residence of Bishop Dominique Lefebre from 1844, after the tumultuous years described above finally ended, until 1864.
The story of how the French came to be presented with the building is well known. It was given in gratitude for their role in the suppression of the Tay Son rebellion, which resulted in the consolidation of the power of the Nguyen Dynasty in the recently settled lands of the south. The beleaguered King Nguyen Anh had taken refuge in Thailand, where he had gained the support of the Thais. When the Thai army that entered Vietnam was routed by the Tay Son troops in just two days, there was no alternative now but to accept the French offer of their military intervention in order to save the day.

When the French expanded the Zoological and Botanical gardens in Thi Nghe parish, the building was transferred to a spot near what is now the Reunification Palace. It was only in 1911 that it was relocated once again to where we can see it today.
The shape and appearance of the building has not changed over the two hundred years, according to information culled from Sawadee.com Vietnam. A renovation of 1945 replaced termite and woodworm-infested walls with brick ones and in 1980, the pillars which had become victim of woodworm were renovated and the insides filled with reinforced concrete. The short article on this site praises these renovations and holds them up as a shining example for a country where efforts in this field often fall short of the mark.
At my request, Father Andrew opened up the doors to the more imposing but less interesting current Archbishop’s palace. We did not wish to disturb the Archbishop, who is now 78 years old and also Vietnam’s one and only cardinal, so I contented myself to viewing the ground floor only. ‘Beyond these doors’, Father Andrew whispered ‘is the apartment for the Papal messenger when he visits.’ We did see the imposing meeting room with fine long wooden table and luxurious glazed wooden chairs. We could not meet the Archbishop himself but there was a handsome bust of his personage on display.
For those with an interest in history, architecture and the religions of Vietnam, a short visit to see the oldest building is worthwhile. It is, as I have indicated, centrally located, not far from major attractions such as the Reunification palace and just around a corner from the War Remnants Museum. Please remember that it is in a busy working area for the Church, so be sure to phone ahead for your viewing. If you are able to, please offer a prayer for the martyrs and be sure to drop a few pence into the collection box in appreciation to St Peter.