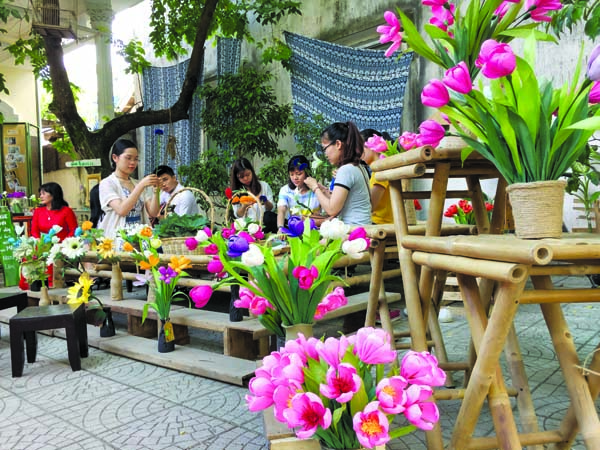 Ms Nhan at the newly-opened facility

A native Hue girl who is famous for her paper flower-making skill opened a facility earlier this June for the purpose of interesting other disadvantaged girls around her in the craft.
Le Thi Thanh Nhan is a self-trained paper flower artisan. Nhan loves flowers and she often feels sad at the withering of flora. ‘Flowers are always beautiful, every kind, and I desire that the beauty would last a long time. But natural law doesn’t allow it and I am sad at the withering,’ said Nhan.
That drove the 25-year-old girl to learn paper flower-making techniques some three years ago. ‘Of course it could never be forever, but paper flowers will last longer than those grown in nature,’ she said. During her study at Hue University of Foreign Languages, Nhan worked part time at a restaurant owned by her cousin in the city to practice her English and at the same time acquired flower-making technique from YouTube.
‘Fortunately, I learned the techniques quite fast thanks to a childhood habit of studying petals of different flower types,’ she said.
Nhan started with making the saffron crocus, which she found easy to work on. She gained early success, as friends and acquaintances appreciated her paper flowers, encouraging the young girl to go further in the craft.
She was successful in making of more popular types of flowers, including roses, Texas bluebells, sunflowers, peonies, carnations, Scorpion grass, and lotus flowers. Nhan became famous across the city for her paper flowers. Young girls are the top customer for her handmade product, as they want their home decorated with the colourful paper flowers that look absolutely like the real ones.
Nhan’s flowers also see strong needs from coffee shops and restaurants in Hue and localities around the country. Many customers trade with Nhan for the larger size of the paper flowers for backdrop decoration.
Stronger market demand produced more inspiration for Nhan. She formed a club, based at her family’s tiny home, and named it LAVIN. With LAVIN, Nhan involved people in love with paper flower making in creating more flowers and new types of flowers.
Most of the club members were not familiar with the techniques, so Nhan taught them for the first time, those including foreigners who get a chance to stay long in Hue.
Nhan’s flowers are sold abroad as well, thanks to her postings on social networks of Facebook and Instagram. Despite of the increasing demand, Nhan continued working on the craft as a part-time job. During the week days, she worked at a public company that provides craft- experiencing spaces for foreign visitors to the city. She made flowers in her free time and had her club meetings during weekends. Nhan retained her full time job for a reason.
‘I nurtured the idea of building a facility for the disabled and teaching them the craft in the first days of my craft success,’ she said.
The salary helped her save up for the opening of the facility.
Two and a half years ago, Nhan connected with a girl who was born with ‘diamond bone’ syndrome and is confined to bed for the rest of her life. Nhan trained the girl to be the first disabled artisan in her craft club.
‘I’m always feeling a pity for the disabled. But I believe that the craft is suitable for them to earn a humble living and connect with life, thus I find them and teach them the craft.’
The time was ripe and Nhan decided to quit the full time job in May, turning her into the craft and the facility.
Fortunately, she met Matthew, an American who wanted to open a coffee shop in the city.
‘My idea of a facility for the disabled worked out easily thanks to the idea of Matthew. He will reserve space for my activities in the coffee shop,’ said Nhan.
Finally, on 3 June, the craft facility-coffee shop opened thanks to efforts by Nhan, Matthew and some of her friends. At the facility, Nhan accommodates a group of hearing-impaired girls and teaches them the craft techniques. When the girls become familiar with the craft, they will demonstrate the techniques for customers as well as produce flowers for sale. To Nhan, the girls are not merely trainees or hired workers for the craft, but they are centre of the facility. ‘It is not merely finding the impaired girls, putting them here paying them for the paper flowers they have made. I have spent a lot effort to integrate them into society by learning their sign language,’ said Nhan.
In Vietnam, many disabled people are considered a burden, as they can’t join society due to their impairment. Some are set aside in their family and waste their skills.
Nhan is seeking for treatment that could help ease the pains from diamond bone symptom. She also planned a trip to HCM City for meeting with crocodile breeders, who succeeded in extracting diamond bone pain-fighting substances from crocodile bones.
Le Minh Chau, a volunteer at the facility, said she admires Nhan’s efforts to help the disable girls get a life. ‘I witnessed the change of the girls after they joined Nhan. Working with the flower craft made them lively and joyful,’ she said.
Chau, who is a second-year student at Hue College of Pedagogy, pledged joining hands with Nhan to make the girls skilled in the craft.
‘Seeing them happy means my happiness,’ she said, adding that she would try her best to assist Nhan in helping the girls.

LAVIN Paper Flower, 87 Ong Ich Khiem St., Hue City.
Find the facility on the right front of the Citadel in Hue, 100m walk from the Citadel.

Text and Photos by Hoa Ha