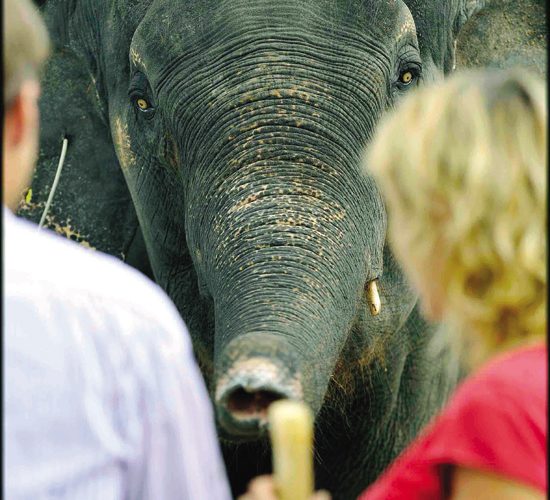 Project to return circus elephant to the bush

Above: Ny, for whom a better life is planned Photo:Tim Barnsley

Vietnam Heritage, March 2011 — Shortly after returning from Dak Lak to Danang, I was alerted to a campaign to re tire a circus elephant in Saigon. This elephant cow, Ny, had been captured from the wild at age three and gifted to Saigon Circus in District 1, by Ho Chi Minh City. She is beautiful, almost black, with piercing pink eyes. It is assumed she was trained by the old style of domination, for the circus ring. She has been performing for 17 years, and when she is not performing, a heavy, 30cm chain secures her leg to a post sunk into cement. Her frustration at being thus chained is evident. She is barely able to lie down, is obliged to eat only from the trainer’s hands and has been without the company of another elephant for the last five years. She has never been outside the compound since her capture.
Laura Burke, an American director, looking for a venue for her Vietnamese cultural performances called Xin Chào! leased the circus tent and hired many circus performers, giving the circus a stronger financial position and a chance to revaluate its future. Mr Thanh, the circus director, understands the wave of future, animal-free circuses and he and his performers agreed to retire Ny from performance and seek a better life for her and the other circus animals that have served loyally for years.
In seeking a new life of retirement for Ny, Mr Thanh has opened discussions with Wild Life At Risk (WAR) for a sanctuary for her. Ny’s transport and rehabilitation will be costly and Ms Burke and many other concerned individuals (both Vietnamese and foreign) and even veterinarians from a Thai elephant sanctuary have come on board to assist in myriad ways to move this forward. And so Team Elephant was formed.
Ny, like all Vietnamese elephants, is the property of the Ministry of Culture, Sports and Tourism. She is naturally a valuable asset to the government, as well as the Saigon Circus. However, Mr Thanh has courageously begun discussions with the Ministry to allow Ny’s transfer to Cat Tien National Park, where WAR is working with Cat Tien to create an area for an elephant-breeding and educational programme. Recently, after three months of orchestration, there was great hope that all elements were coming together for a dignified retirement for Ny.
The joint decision of Mr Thanh and the government reflects a new wisdom in terms of elephant conservation, and can only be highly applauded. It is hoped that Ny can be rehabilitated gradually into the semi-wild of Cat Tien and become a strong symbol, a flagship elephant. This could spell a new era for this most precious of Vietnam’s heritage animals.