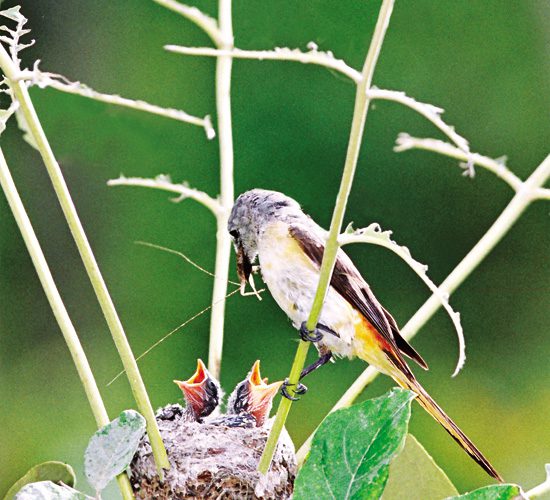 Vietnam Heritage, August-September 2011 — The Small Minivet, Pericrocotus cinnamomeus, h?ng v? or ph??ng chèo nh?, in Vietnamese, mainly lives in thinly populated forests with rocky mountains. It builds its nest at the beginning of rainy season. A bird can lay three eggs at the maximum, about one centimetre long. It can lay a second time in a year, if the first clutch fails.
The Small Minivet  is rarely seen and seen only in southern and southeastern parts of the Central Highlands. It is small and usually flies very fast and high, so we can recognise it only by its song, which is like a sad whistle from afar.
The male bird is the one that decides where the nest will be. Wherever the male bird flies to find materials to build the nest, the female follows. After the male bird has found the needed materials, if the female still hasn’t found any materials, it has to fly back too in order to ‘witness’ its ‘husband’s’ building the nest. If the female bird has found materials but the male bird has not, then the ‘wife’ has to wait. When both of them have found materials, the male is always the one to head off to start construction. Hatching eggs is the female responsibility, and during 15 days of incubation, the male bird’s job is to find food to feed the female bird.
When the male bird returns with the food, the female bird always flaps its wings very happily as if it has been a long time since they last met, although it takes the male bird just 13 to 20 minutes a trip to find food. The Small Minivet  always travels in pairs except if the female is sitting on eggs. When their chicks are born, the Small Minivet couple becomes even closer. This image isn’t usually seen in other species.
The Small Minivet is small, very gentle, and so in nature has many enemies. To protect themselves, they skilfully disguise their nests. The nest is small, about five centimetres across. Inside, there is grass and litter, and the outside is covered with bark (see cover of this edition). The nest is always the same colour as the bark and is overlaid with cobweb, making it difficult even for inexperienced people to spot.
The way the Small Minivet flies is also very different. When entering or leaving the nest they fly almost vertically. Their speed is terrifying, making them nearly invisible. This is how they prevent enemies from locating the nest. However, nine in every ten nests with eggs and chicks are wiped out by bigger birds. At the moment, the Small Minivet is in great danger of extinction. Its most dangerous enemies are tree pies, falcons and humans.
Witnessing the Small Minivet ‘struggling’ to survive, I have thought of a way to protect them: I have hung a dummy next to the nest so that other birds will be scared away. This has succeeded, but the dummy also caught the attention of poachers.
The Small Minivet belongs to the Campephaqidae, in Passeriformes. It is 13 centimetres long. The male has a grey-black head and back, a red-pink chest and yellow-spotted wings. The female has a purple-grey head, a reddish back and a white-grey body.