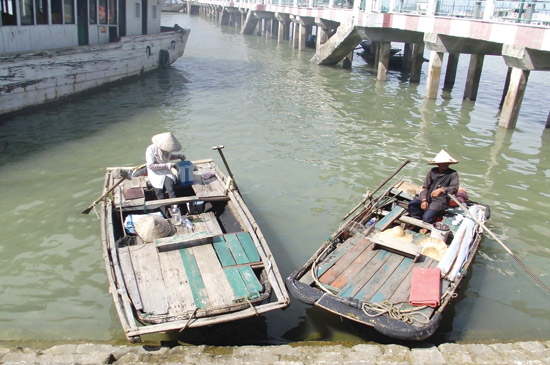 Power pride and progress: a visitor recommends a Vietnam vacation

A boat lady and tourists on a canal in the Mekong

Vietnam is known as the â€œLand of Dragons.â€ It is one destination for which any amount of praise seems inadequate. The countryâ€™s natural and historical attractions appeal to many visitors from all parts of the globe. Today, the largely agrarian country is shifting towards a more multi-sector economy. The country has a wealth of dialects spoken in different regions. There is almost no end to the breath-taking sites visitors can see in this fascinating country.
The great theme of modern Vietnamese history is the Vietnamâ€™s war of independence and reunification. The Vietnam War proved to be an extremely sobering experience that caused so much suffering for the Vietnamese people. The people of the country have a well-deserved reputation for being hard workers, but they enjoy their leisure as much as anyone else. Ho Chi Minhâ€™s name comes to mind when we remember the recent history of Vietnam. He is the best-loved and famous political figure in the country. Ho Chi Minh the founder of the Vietnamese Communist Party and, as leader of the revolution, carried the torch of Vietnamâ€™s independence movement for over half a century. As a revolutionary he made great contributions to the victorious Viet Minh and Viet Cong forces that unified the country. Mausoleum Ho Chi Minh, a monumental marble edifice at Ba Dinh Square in Hanoi, was built to show the deep gratitude of the countrymen to their great leader. His remains are displayed inside the chamber of the mausoleum. Hanoi, the capital city known as â€œcity of lakes,â€ is a thriving metropolis with cloud-tickling skyscrapers, numerous specialty shops, boutiques and colourful markets that unhesitatingly leap into the future. A visit to the country would remain incomplete if one doesnâ€™t drive a 3½-hour journey on road from Hanoi to Halong Bay port. The five- hour cruise in a double-deck wooden boat in the bluish green waters can be an enjoyable boat excursion. The UNESCO world Heritage site Halong (or “Descending Dragon) Bay is situated amidst a splendid panorama. The bay covers an area of 1500-square-kilometres dotted with a cluster of 1,960 limestone islands.
Hue is in the central part of the country. It is studded with many archaeological sites. Among these are the feudal capital city with fortresses, temples, mausoleums, pagodas and bridges that attract thousands daily. The Perfume River is famed for offering a river cruise in a traditional wooden boat.
Travelling from the North to the South of Vietnam can be a fantastic experience for a tourist. Ho Chi Minh City (HCMC) is the largest city in Vietnam and is situated nearly 1,700 kilometres south of Hanoi. After the end of war, Saigon was renamed Ho Chi Minh City in honour of the great Leader. It is a city of rapid development, where modern buildings are raised right beside 19th-century buildings. An array of giant cranes shows the development fever in the city. Among its highest-esteemed attractions are the Notre Dame Cathedral, the Municipal Theatre, the re-unification palace, the Mekong river cruise, the Cá»§ Chi tunnels and the Vietnam War Memorial Museum. The Vietnam War memorial museum is one of the most recognizable places to visit in the city. It is a living testimony to the history of the Vietnamâ€™s war of independence and re-unification. It is a place preserving the memories and relics of the Vietnam War.
The country has tended to preserve its traditional music, theatre and dance offering visitors the opportunity to experience an ancient forms much as they were hundreds of years ago. Vietnamese art possesses several distinctive characteristics that give it its own unique style. There are grottos, temples and pagodas that are still there for the young generation understand their roots and origin. If one is to understand and experience the surprises of the cultures of the world, Vietnam surely is a voyage not to be missed.
Dr. Srimal Fernando, a journalist and an Asia Correspondent based in Colombo, visited Vietnam on an invitation from the Vietnam Embassy in Colombo, Sri Lanka in August, 2012)

Panoramic view of HCMC from Saigon

A religious site in Hue

Text and photos by Srimal Fernando*