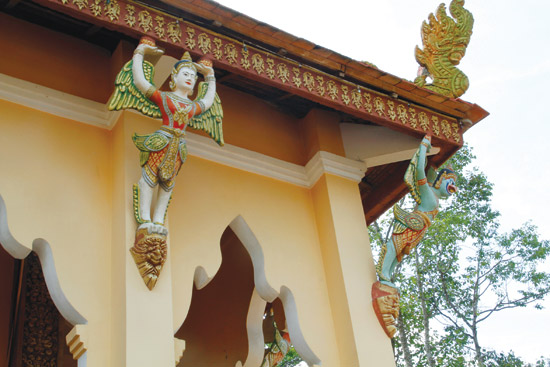 Pothi Somron Pagoda in Can Tho

A statue at Pothi Somron Pagoda, Can Tho

In contrast to many other Buddhist pagodas, Pothi Somron conveys a rich communal character. The main chamber and pillar stÅ«pas were built on a space of modest area. The remaining large areas were reserved for shared activities, such as preparing for festivals, activities relating to the arts, sports, and recreation.
Situated next to National Highway 91, Pothi Somron Pagoda in O Mon District in the city of Can Tho in the Mekong Delta is 277 years old. Pothi Somron Pagoda was built for the first time out of leafy trees. In 1856, the pagoda was rebuilt out of precious wood and roofed with scaled tiles that reflected an influence from the cultures of Khmer and India. Almost 100 years later, the pagoda had degenerated badly when the monk Thach Khieng, the resident abbot at that time, went over to Phnom Penh to invite a Cambodian architect to draft a design for restoring the pagoda, one that was based on retaining its traditional architecture. Completed in 1952, the pagoda was built with stone bricks and has been maintained to this day.
It can be seen that the main chamber is the outstanding piece among the architectural arrangement of Pothi Somron Pagoda. The main chamber was built with high ceilings and has four broad corridors extending out in each direction, which, according to Hinduism, is considered an arrangement that looks out towards the four directions of the universe. The main door turns out to the east, since the Khmer believe that although Buddha abides in the Western Paradise, he always faces the east in order to deliver all sentient beings.
The roof of the main chamber is done in three overlapping layers with dragons running along the edges of the roof, their tails stretching straight up to the sky. Surrounding the corridors are rows of pillars, four of which are affixed with the divine Krud bird holding a jewel in its mouth and intertwined with Kennar heavenly damsels. Geometric patterns and water hyacinths were meticulously engraved on the walls, stairs, bases of the pillars, railings, doorframes, roofs, and partitions to create a unique temple that is steeped in the cultural character of the Khmer.
Khmer Buddhist pagodas all have pillar stÅ«pas, which every family in the community builds to enshrine relativesâ€™ ashes after they pass away. Nevertheless, it is rare for a pagoda to still retain a stÅ«pa that is over 200 years old like Pothi Somron. The stÅ«pas were built out of Lindera myrrha, laterite, and bricks. They hold the remains of many Buddhists and have preserved them over many generations. The pagoda still retains many ancient objects, such as around 100 Satra scriptures (texts written on leaves), wooden sparrow wings from the year 1856 that are engraved with images from the stories of ÅšÄkyamuni Buddha and nearly 20 wooden statues, which are also from the nineteenth-century through to the present.
In contrast to Buddhist pagodas that practice MahÄyÄna Buddhism, the Khmerâ€™s TheravÄdin Pothi Somron Pagoda conveys a pervasive communal character and includes a capacious space that is reserved for shared activities. The vegetarian canteen is a room which bonzes in the pagoda can utilize as a place to eat and drink, but its main function is still to allow the secular population to gather for activities or even as a place to sleep if they have come from afar. Frequently, the monastics chant sÅ«tras in the main chamber while common folk continue to dance and sing outside in the courtyard or in the vegetarian canteen. Furthermore, the pagoda is a place for many social events such as campaigns to construct compassion homes for ethnic Khmer compatriots or to assist in the collection of valuable artefacts. Not only is the pagoda a sacred institution for the Buddha Dharma (Buddhist teachings) for local Khmer compatriots, it is also a familiar place among the people of Can Tho whenever numerous cultural and social events take place. The pagoda contributes to enriching the material and spiritual lives of the people. The resident abbot there relates that in the years of resistance against the French and Americans, the pagoda was a place that helped and sheltered many youths avoid enemy armies, as well as one that allowed them a place to stay and practice devotion for extended periods of time.
Standing in a corner of the pagoda at the foot of the vo uu (no worry) tree, which is said to have been brought from India in 1969, I sensed a refined, mild fragrance. â€˜Khmer Buddhists regard mothers and fathers with the utmost importance as was taught by the Buddha. Therefore, during their lives, children must treat their parents well and requite the filial love of those who gave birth and raised them. Before the age of 21, males set aside time to enter a pagoda and practice monasticism. That is also a way in which the Khmer people express filial piety towards their parents,â€™ a monk explained.
By immersing myself in its contemplative atmosphere when I arrived at Pothi Somron Pagoda, I beheld its unique architecture and sensed the intimate life among the pagoda and the community. I was also moved by the fact that, of all the architecture, only one stÅ«pa that enshrines crematory remains still endures, retaining the mossy features of time. Aside from that, gold and red have come to coat the architecture in the pagoda, thereby vivifying the colours within this verdant space next to the O Mon river mouth after the pagoda had been restored and recognized as a national heritage site.

Text and photo by Kim Dung