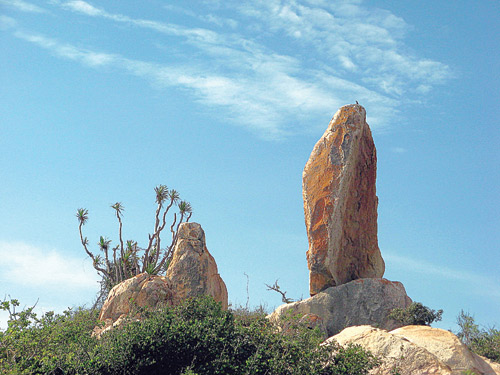 Vietnam Heritage, May-June 2011 — We were woken by the noisy calls of a flock of white-crested laughing thrushes, Garrulax leucolophus. After breakfast, we continued up Chua Mountain, which is over 1,000 m in altitude.
Early this year, some wild-creature research friends and I went to Nui Chua National Park, in Ninh Thuan Province, about 300 km north of Ho Chi Minh City, to study and photograph.
This park is unique in Vietnam: one half is semi-arid, like much of Africa, and the other lush tropical forest with hundreds of species.
From the park headquarters, it took us 30 minutes by bus to reach the study area. The road winds along a mountainside by the sea. Once we reached the study area, we moved on foot.
The first sunbeams landed on cliffs.

A crested kingfisher, Ceryle lugubris, was standing on a ledge, eyes toward the sea.
Buchanania reticulata, an excellent drought-tolerant plant, which is common here, bloomed sweet-scented and white, attracting bees. In a few hours, when the sun was high, the flower would close to avoid losing water.
A huge rock balanced on a smaller rock remained against time, sandy winds and storms. Surrounding this wonder was dry forest with thorny plants. Most of the plants in this desert-like half were underbrush with big feet and big foliage to stand against strong, dry winds. They all had thick leaves or a rough and thorny body, which is very typical for arid-land, maritime flora.
Nestled in green leaves was an oriental whip snake, Ahaetulla prasina, sleeping. The favourite prey of this long-bodied snake are lizards, young birds and birds’ eggs. Woken by the sounds of shutters, it started and stared at us warily, its long tongue moving threateningly. This species is as slight as a pencil but a metre long and adapted to climbing and hunting in trees.
After passing two low mountains, we began to feel the burn of the sun. Half the drinking water for the day was already used.
Near a small stream, an old chestnut tree with a rugged foot gave us good shade. Looking up the tree, I saw a bunch of the endemic white-lipped orchid, Christensonia vietnamica, a species recently discovered by the Dutch scientist J. R. Hagger. This is the only species of orchid that can survive in an environment as harsh as this.
After several more low mountains, a small valley, lush and dense in trees, appeared. There is a rather wide stream with many boulders and a small dam built by the local Raglay people to channel water into rice fields. This place used to be a small Raglay village. In accordance with a policy of the Government, they moved to live in new houses by the coast. Currently, the park’s management board allows them to farm here.

We stopped for lunch and afterward everyone lay in tree shade for a nap. We woke when a woodpecker noisily called its flock to feed on a fig tree. It was 1.45pm. We moved to altitude 480 metres, where we would spend the night.
Forest life-forms all have a way or several to adapt to the heat. The currant tree Andestima sp. has small scrubby twigs and curly leaves. When the rainy season comes, the tree produces new leaves. Along the path were plants that virtually hibernate then wake when the rains come.
We camped beside a stream with flat rocks and shady trees. The trees here grew well thanks to the available water. In the forest, night fell quickly. Mosquitoes attacked us crazily. We had dinner while trying to drive them away. The huge mosquito proboscis could go through clothes and make everyone jump.
We started work again by going along the stream. It was time to seek what had been hiding from the harsh sunlight and was now about. A couple of leopard cats, Felis bengalensis [three to five kilograms and 45 cm to 55 cm in body-length] were waiting for prey near the stream. When the strong flashlight hovered, they stared at us with flashing eyes, before leaving quietly.

A white-lipped pit-viper, Trimmesurus albicolais, was coiled on a branch near the water surface, silently in ambush. In a crack of a large rock, Caovansung’s bow-fingered gecko, Cyrtodactylus caovansungii, a species discovered in 2005 in Nui Chua National Park, was enjoying a greasy grasshopper.
We failed to get a shot in a once-in-a-life-time moment when an unclassified gecko lay in wait for a blue-winged mantis. It is most likely that this gecko species will be a new object for my research. And I almost stood still, and could not believe my eyes on seeing that the mantis could live in such a dry place and at such a low altitude.
After collecting some samples of frogs, toads and lizards and photographing the specimens to add to our website www.vncreature.net, we returned to the camp at 3 a.m.
A few hours later we were woken by the noisy calls of a flock of white-crested laughing thrushes, Garrulax leucolophus. After breakfast, we continued up Chua Mountain, which is over 1,000 m in altitude. At 800 m, we saw a place where forest had at one time been destroyed to make way for farming. All that was left were barren rocks, low bushes and an immensity of cogon grass.
Strong winds seemed to push us backward. Leaving behind the Africa-like half of the park, we came to the Asia-like half, with even, green forest and tropical moisture. The wind from the sea met cold air and condensed into cloud. The forest coverage was very good, so the water in the litter-leaf layer did not evaporate. The forest was large, beech-family Fagaceae and coniferous trees such as Nageia fleuryi, Dacrydium pierei, Podocarpus annamiensis and Taxus wallichiana.
On the second night, we continued to search for specimens. Past midnight, my jacket was not thick enough to stop the cold of moisture and wind. My shoes were also soaked.
Mr Cao Van Tham, our Raglay guide, who had gone barefoot all his life, screamed when he stepped on something slimy and moving. I ran toward him with tongs and pulled a creature out of a crevice. It was a pretty big Asian tailed caecilian, not a snake. I explained that this was just an amphibian species, Ichthyophis bannanicus, which laid its eggs in a hole and was harmless. Our guide still looked at it suspiciously. I pulled eggs from a hole and touched the cute mouth of the amphibian. Mr Tham was somewhat relieved.

We had a bumper night harvest of specimens. The most noticeable of them were two very nice tree frogs, Rhacophorus sp., found when they were laying eggs on a rock, and a Zingiberaceae plant found along streams. The fact that the tree frogs were laying eggs in this season in Nui Chua National Park was an exciting discovery for researchers of reptiles and amphibians.
Established in July, 2003, Nui Chua National Park is in Ninh Hai District, Ninh Thuan Province, Central Vietnam, and has an area of 29,865 hectares, including 22,513 hectares of land, 7,352 hectares of sea and 73,520 hectares of coast. It includes natural dry forest in the driest area of Vietnam and has 1,265 species of plants and 306 species of animals, many of them  rare.