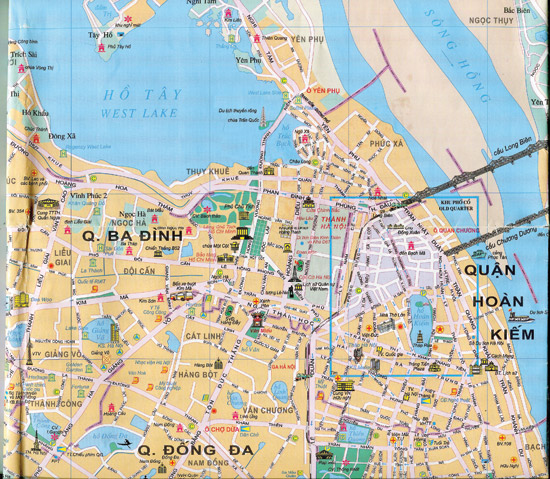 One person doesn”t know where he is going

‘Where you go? I help you,â€™ the man reclined atop his motorbike called out. As I shuffled by, his cries reached even higher levels of urgency as he realised his two wheeled limousine service likely was no match for my immediate transportation needs. â€˜Sir! Sir! I help you find. Where you go?â€™ His pleas washed over me and stopped me in my tracks. The truth is I knew not where I was headed on foot much less what would unfold here in the Truc Bach Lake neighbourhood of Hanoi.
Soon enough his solicitations and inquiries faded into the background cacophony of motorbikes, beeping horns, and construction noise. At the time I could never have predicted that one morning of aimless wandering would become a collection of experiences forever changing me. Indeed, the journey can at times prove more interesting than the destination itself.
I recently returned to this beguiling city that had once upon a time captured my heart while hosting me for eighteen months. While living in the nationâ€™s capital, my universe largely centred around the Western-friendly Tay Ho enclave, on the shores of its namesake lake, along with sporadic trips into the energetic Old Quarter. Sandwiched in between is Ba Dinh Districtâ€™s concrete sprawl of bustling streets and alleyways seemingly off the radar of visitors and expats alike with Truc Bach Lake but one of many diverse anchors.

Busy Au Co Road, largely detached from the labyrinth of streets flanking the eastern edge of this expanse, stands mired in its traffic-clogged six-lane glory. Every manner of wheeled conveyance ever known to grace Vietnamese pavement, along with a brave pedestrian or two, whizzes past in its haste to quickly close the gap between distant points, only to miss a more people-scaled neighbourhood stirring to life one narrow shop house at a time. In contrast, the slow pace of my own two feet allowed me to drink in a perpetual bombardment of scenes so different from any in my normal daily routine.
Approaching this small lake, that is fragrant in a most interesting way, ringed by typical urban sprawl, one cannot help but notice two very distinct cityscapes colliding in only a few short blocks. Yen Phu Road deposits visitors from more upscale Tay Ho with its tony residences and shops into the more local Truc Bach area where the two competing cultures swirl together with a mix of restaurants catering to both populations. Then, in the blink of an eye, each disperses into its own local rhythm depending which direction one chooses. This particular morning the road less traveled by my fellow Westerners beckoned, and I immersed myself full on into old Vietnam.

The ribbet, ribbet, ribbet of frogs faintly emanating through green metal window shutters drawn tight snapped me out of everyday lifeâ€™s homogeneity to suddenly transport me into a new world anything but. Their croaky melody conveyed aural insight, or warning depending on oneâ€™s tastes, of the menu dâ€™jour at one of many hot-pot restaurants dotting the lake. Our senses swallow the world around us in so many ways, and already a feast of sound attempted to monopolise centre stage.
Midrise buildings in varying states of repair from multicoloured canyons channel the curious down narrow streets into a version of Vietnam well beyond any guidebookâ€™s black and white pages. Cooking fires roaring to life with the whoosh of a match, television sets well past their prime belting out their tinny effect, wicker brooms scraping noisily against dusty concrete – the morning rhythm varies little day by day.
One partially open gate luring my eyes into a very basic room illuminated by a single bulb dangling from bare wire served as my portal into a more private domain. I spied a multi-generational family converting overnight living quarters to a more economic day use as young children rolled up sleeping mats while adults rolled out food carts and assorted cooking accoutrement. A wall calendar depicting rice terraces carved into a mountain remained in May 2002. Perhaps its unturned pages are a metaphor for life in this neighbourhood as a whole, where deep-rooted tradition seems to change slowly, and tomorrow shall fade much as yesterday descended into its gradual close.
The narrow sidewalks already abuzz with sunrise rejuvenation pulled my attention back into the humid morning air. As I turned the corner at Quan Thanh and Dang Dung Streets, I paused to watch motorbike-riding patrons bargaining with sidewalk vendors for meat and vegetables. An opening hour of a different nature loomed imminent as shopkeepers and office workers slid open squeaky gates, turned on lights and gently swept these morning squatters from doorways further towards the road.

Fresh rice noodles inside the market

Soon a whole different facet of these environs would spring to life with commerce of a more modern ilk awakening from its nightly slumber at preordained opening hours posted on window glass. Such conformity blends so seamlessly into the more time-honoured ways undisturbed by the tick-tock regularity of the clock.
What a wonderful sensory overload Hanoi can be, I thought to myself as an automated cash machine dispensed from my account an ocean away. A simple blue plastic card had accessed an invisible universe probably foreign and unknown to the conical-hat-wearing saleswoman hovering protectively over pig ears and snouts lining a blue plastic tarp just steps away.
Just as this neighbourhoodâ€™s hustle seemed unable to absorb any further bustle, strategically placed loudspeakers suddenly crackled to life with a melodic female voice reciting the dayâ€™s announcements and news. For me these indecipherable words seemed exotic icing on an already delicious multi-layered cake, yet for many this invisible woman is one regular link to the outside world beyond the end of the block. As the mystery woman bid her final goodbyes, the sultry morning air swooped in to replace her with a heavy-handed warm embrace as I neared a particularly vibrant strip of Chau Long Street.
The Chau Long Market seems to redefine the meaning of summertime torridness while sizzling and baking all who venture inside its run-down walls defying the pull of gravity along its namesake street. Streams of effluent darkening tables of raw meats and seafood slowly trickle earthward to wash over damp concrete already stained with a long history of runoff. Small electric fans swirl the odour of commerce upward where the awaiting heat and humidity disperse the malodorous air outward.
No matter what may be on offer at a particular vendorâ€™s slice of real estate, one constant permeates all corners of the market – the chop, chop, chop of cleaver meeting wooden cutting block. Chop, chop, chop. Chop, chop chop. As I dodged throngs of shoppers negotiating the narrow passageways, sensory overload once again encroached on my personal space. I felt as if I had been sucked into a tornado with no idea where my journey in its roaring funnel would deposit me. Chop, chop, chop. Chop, chop, chop.
The sounds around me rose to fever pitch, and I had failed to hear a woman beeping her motorbike horn at me. The last thing one would expect inside a building is a motorbike, yet the marketâ€™s impossibly narrow passageways seem to host a steady stream of exhaust-spewing traffic. A wizened old woman wearing the patterned pyjama ensemble serving as the loud and colourful uniform for many a Hanoian grabbed me by the arm to extract me to safety. Though her words were just a string of rising and falling tones to my untrained ears, their intent rang loud and clear. She was admonishing me for loitering in a place yielding to no one, and I felt the tsk, tsk, tsk of others who had witnessed me upset the natural balance of their market universe.

In a respectfully discreet manner, I followed my rescuer from a distance while she nimbly manoeuvred from table to table probably as has been her ritual spanning many a decade. As she collected a small amount of an unidentifiable red meat and plastic bags of vegetables and herbs, I wondered about the time journey her eyes have witnessed. For now her market ritual seems to withstand the test of time in sharp contrast to the glass and steel skyscrapers sprouting around her.
Just beyond Chau Long Market on the short Ngu Xa Street bridge, the off-key notes of a funeral band rising ever so faintly above the normal neighbourhood din reminded me that every era at some point shall draw to an end. Down a narrow side alley stood a bright white tent in stark contrast to the darkening mass of storm clouds now drowning out the late morning light. Perhaps what I next witnessed is a clichÃ© of epic proportions yet in a way sums of the Vietnam swirling about Truc Bachâ€™s streetscape.
Rolling steel-coloured clouds finally unleashing their opening shot forced me to duck under a pho parlourâ€™s leaky awning. As I listened to millions of raindrops pounding their drumbeat into the concrete and tin around me, a gust of wind peeled back the tentâ€™s door to reveal the old guard laying to rest one of their own. A young mother with baby in arms emerged from the funeral and quickly walked past my vantage point. As always in the cycle of life, darkness gives way to light with the sunâ€™s healing rays once again brightening the void left by the slackening rains. These fleeting images of the cycle of life colour in this perpetual painting one brushstroke at a time.
As Truc Bach reawakened from this brief rain-fuelled siesta, I wound my way out of its tantalising tentacles. Where Pho Duc Chinh Street meets the hulking Sofitel Hotel, which looms larger than life over its more friendly-sized neighbours, an elderly woman pushed her rusty bicycle out of an alley. She mounted a torn seat and wobbly manoeuvred past three young, fruit-smoothie-sipping women fully engrossed in a parallel electronic world delivered via their smartphone screens.
Seconds later an equally withered man pedalled by on his bike while a speaker attached to the crooked handlebars blared banh bao, banh bao, banh bao to indicate that a transparent case attached behind his seat secreted a stash of steamed buns. No one seemed to notice anyone else.
This belongs to the juxtaposition that is the beauty of Hanoi, where old and new collide so abruptly, like distinct brushstrokes on a constantly evolving canvas. By the end of my walk I had created a masterpiece that was part traditional Michelangelo, part abstract Matisse. The ever-changing arrangement of characters and scenes ensures the streets and sidewalks of Truc Bach Lake are thankfully never the same painting twice.