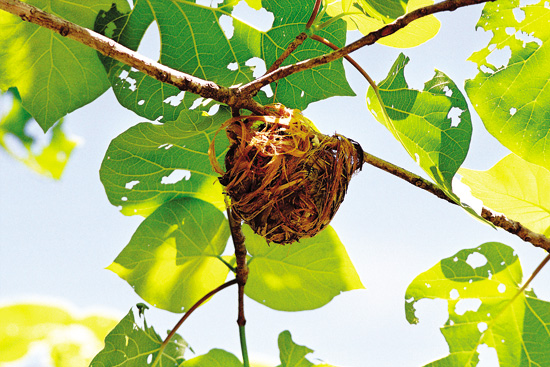 Neglected on the edge of extinction

Vietnam Heritage, August-September 2011 — The black-hooded oriole, Oriolus xanthornus, it is said in popular culture to correspond to the girl called T?m, the Vietnamese version of Cinderella, in the Vietnamese story T?m Cám.
It feeds mainly on insects and wild fruits and can be found mostly in the forests of Central Vietnam and the southwest.
Called vàng anh, it is a small bird, an adult being about 15 cm long. Its head is black, its beak and eyes red, its legs grey, its body yellow and its tail and wings black-and-white.
The black-hooded oriole usually lays three eggs. During the 17 days of incubation, the female turns the eggs every 30 minutes. It has an average lifespan of ten years.
I couldn’t get a photograph of the bird during the first year I was in the forest, perhaps because people had been hunting it a lot and it was hence afraid of photographers, too.
The vàng anh oriole has 16 songs and calls, not including two calls for its young.
It makes its nest of a climbing plant called chùm roan that has a soft bark with strong fibres. Forest peoples use this bark for strings for bows and crossbows.
In my movie Vàng Anh, which won first prize at a nationwide environmental movie festival in Hanoi in 2008, I suggested including the species in the Red Data Book of Vietnam so it had a chance to be protected by law. Nothing has been done, however, though the bird is on the edge of extinction.
[Like the h?ng v? of the previous article, the black-hooded oriole truly is a Cinderella species, Cinderella meaning, according to the Concise Oxford English Dictionary of 2006, ‘a person or thing that is undeservedly neglected or ignored’. – Ed.]