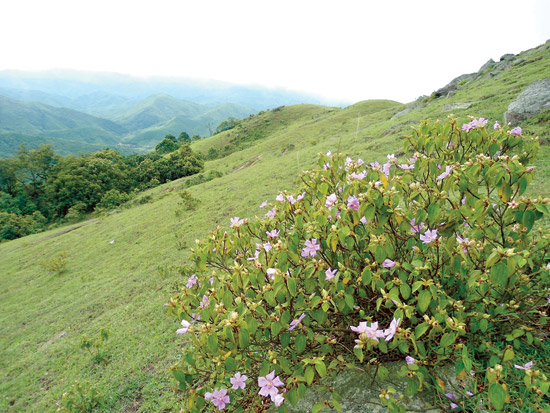 Mystery on a plateau

T he northeastern province of Bac Giang is known for its cool year-round. One weekend, my friends and I decided to visit Dong Cao Village, in Thach Son Commune, in the provinceâ€™s Son Dong District.
At 8 a.m., our bus left Bac Giang Town and headed northeast. It covered almost 90 kilometres before taking us to the centre of Thach Son Commune.
The road was rough, with stones exposed by a heavy rain the night before. The bus stopped in Dong Bam Village, some five kilometres from Dong Cao. We would have to cross a forest.
We borrowed four motorcycles from the village but none of us was courageous enough to drive. We asked the local young men for help. Half of us went on foot.
Dong Cao Village has 24 households of the ethnic group Dao, living in the middle of a cloudy valley. Not many people know about the village, partly beacuse of the remoteness and dangerous roads.
A young man called Thang, not Dao but of the Cao Lan tribe, took me on his bad
motorcycle uphill and downhill and round some sharp bends.
â€˜The roads are bad, so we would not ride a good motorcycle even if we had oneâ€™, Thang said. â€˜We always have to get our motorcycles repaired after a trip like this.â€™

We visited Trieu Tien Thoong, a 72-year-old Dao man. After pouring a cup of a tea-like drink for me, Thoong said, â€˜It was desolate here in the past, with a lot of trees and dangerous wild animals. A few years ago, people began to have an idea of growing speciality vegetables and raising cows for milk but it is not clear why they havenâ€™t carried out the plan.â€™
The countryâ€™s electricity grid hasnâ€™t reached the area and there is a limited amount of farmland. Irrigation is difficult. Thoong said rice-production and forest-exploitation did not provide enough food for the locals. â€˜We are-half-a-dayâ€™s walk from the market [Van Son Market], so we go to the market a couple of times a month to buy some necessities like salt, paraffin and flashlights,â€™ he said.
Even on the warmest summer nights, people have to use blankets.
Thoong showed us a place called Hang Vua (Kingâ€™s Cave) where there is a vertical cliff in the middle of a forest and a stream. The place is breathtakingly beautiful. It is not clear why the Dao people here call it Hang Vua. Thoong
couldnâ€™t give an explanation.
Walking up King Mountain (NÃºi Vua), we strolled on green grass in the middle of a plateau, with bushes and wild plants in flower here and there in mist, and we could hear some footsteps of buffaloes.
Picking wild gooseberries and putting them into his mouth, Luyen, a member of our party, looked as if he had never done such a thing before.
Under layers of clouds, we lay on the grass and took the cool air through the skin.
We discovered an area with huge rocks of different shapes on a hill. The rocks were side by side, creating a nice shape as if they had been arranged by human beings. We decided to stay, watching the sun go down behind a hill, where smoke rose from a house roof.n