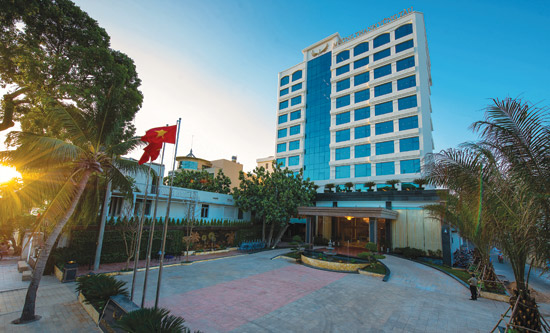 Until recently, I had not heard of MÆ°á»ng Thanh. I was flummoxed by the meaning until I was informed it is actually Thai and could be translated as â€˜Godâ€™s own countryâ€™. A suitable slogan for the company could be â€˜God’s Own Hotelâ€™. I was lucky enough to be invited to stay at MÆ°á»ng Thanh Vung Tau Hotel, which has been opened barely a year.
That day, I had climbed up and down a mountain and walked several miles of road in Ba Ria-Vung Tau Province. A young female receptionist was there to greet me with a welcome drink. I was escorted to my eleventh-floor room by the Front Office Manager himself, Mr Phuong.
The chairs and wall were white and the furniture dark tropical hardwood. The colours were reflected in the accessories; white patterned lamp shade and black wooden clock. There was attention to detail with white leaf-shaped soap in the bathroom in a black leaf-shaped container. The floors were white tiled and brown mock parquet. A large widow framed a panorama of the bay, a park and Big Mountain. To the side, another window afforded a view of much of the rest of the city. Freshly budding carnations, orange, red and white, adorned the window- side table and there were fresh tangerines still with green leaves attached.
Feeling a new man after a couple hoursâ€™ rest, I went down to the second floor for dinner at the Hai Dang Restaurant. I had been offered both a Western menu and a Vietnamese one. I chose the latter. My company was Mr Buu, Assistant to the General Manager and Mr Dong, Food and Beverage Manager. Although this was the table d’ hoteI, I was invited to select one dish. â€˜How about frogâ€™? I said. I went for the San Miguel draught beer at a very reasonable 20,000 dongs a glass.
The first appetiser was buffalo jerky with raw diced cucumber and garnishing. The follow-up was a giant oyster baked in cheese and served in its shell. Next, the ever-attentive MaÃ®tre d’ brought on cubes of pork cut from the ribs, garlic bread and chips. Then, I had been expecting the frog to hop onto the table dressed in butter sauce, but a new culinary delight awaited me. The frog meat had been minced, garlic and herbs added and deep fried into patties. My hosts informed me that this is quite a common way of serving frog in Vietnam.
The next course was a visual, as well as a gastronomic, delight-King prawn in tamarind sauce. I was not so used to eating in courses. The other difference between home and the restaurant is that we normally begin to eat rice about halfway through the meal. Here it was served fried with seafood at the end. â€˜That is to fill you up after savouring the other dishesâ€™ I was told. Quite right too! I had enjoyed a wonderful meal with just enough room to finish off with fresh tropical fruit.
I had a long, peaceful sleep and found a good full buffet breakfast in the Hai Dang the following morning. I continued eating Vietnamese, with a flavoursome bowl of Pho with the tenderest slices of chicken. Finally, I tucked into some kim chi.
Mention should be made of the hotel’s other facilities. There is a well-stocked bar with live music some nights on the ground floor. In the basement, there is a spa treatment salon. On the third floor is the fitness centre, a karaoke room and the swimming pool.
All too soon, it was time to get home. In a nutshell, this is a great addition to Vung Tau’s range of hostelries. Whether on business or for pleasure, this is an excellent place to rest up, enjoy the great food on offer in Vietnam and in particular, the wonderful seafood of this town, and even to quaff a great glass of chilled beer. I look forward to returning here and hope to get to know some of the other seventeen hotels in this chain.