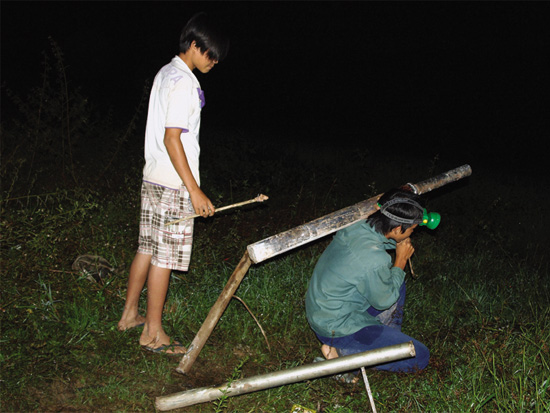 ‘Mr’ is shooed out of the rice

Vietnam Heritage, February 2011 — Eighty kilometres northwest of Ho Chi Minh City, the last rain of the rainy season was forming a great white curtain over Vinh Cuu National Reserve in Dong Nai Province. Le Dinh Tam, a farmer living in Hamlet 7, Ma Da Village, Vinh Cuu District, Dong Nai Province, said, ‘Các Ông (the elephants) have been around this area for months. They come out of the forest at night, attacking our paddy fields. We stay awake almost every night trying this and that to scare them back to the jungle but nothing has worked. There are nights they come three or four times. I’m worried about my kids. If they attacked our house, I wouldn’t know what to do.’ (Many Vietnamese people use the word Ông (Mr) to address big animals such as elephants, tigers or lions to show either fear or respect.)
In Mr Tam’s palm-leaf roof house, a simple dinner was served and he invited me to join in. While we were eating, suddenly there were three big explosions. We all stood up, Mr Tam immediately ran out the door and I quickly followed. I understood what was happening: the elephants were launching an attack and everybody was in a rush to chase them away to protect the rice paddies. The fact that every man in the hamlet gathered showed how serious this was.
Bright flashlights ran back and forth along the jungle near the paddy fields, where the elephants usually come out. My watch showed 8.30 p.m. The villagers held metal pots and six of them had guns, everyone waited for the elephants to emerge. Through my binoculars I saw a trunk moving behind the bushes. Finally, an elephant came out, followed by about ten female and baby elephants. The villagers shot guns loaded with calcium carbide (which only makes noise and light and causes no injury to the elephants), ran electrical saws and banged metal pots against one another, creating a big noise. All the flashlights were concentrated on the elephants. Some baby elephants turned back. The lead elephant, which seemed unfazed by the noise, kept heading towards the paddy fields and soon started eating the rice. Mr Tam put two big balls of calcium carbide into the gun and fired, causing a big explosion that frightened the elephant and he ran back to the jungle. There were three more attacks before sunrise.
Mr Tam said, ‘We’re the ones who suffer the most from the damage caused by those elephants. They’ve destroyed lots of things but still, we can’t do anything more than scare them away because there are serious penalties for those who do harm to the elephants. But we hope the Government will help us with the losses, so we can settle our lives.’
Mr Hop, another farmer said, ‘It costs us about VND20 million ($1,000) to grow a hectare of rice, but if we are careless just for one night, we will lose it all. The cost for the fight against the elephants is VND50,000 ($2.50) a night.’
Note: The Asian elephant, or Elephas maximus, is smaller than the African, but is still the largest mammal in Asia. It is about 4m to 6m long, 2.5m to 3m tall, and weighs 3,500kg to 5,000kg. An adult elephant eats about 150kg to 300kg of vegetation, including grass, leaves, small branches and bamboo shoots, every day. Asian elephants live in sparse forests, secondary forests mixed with bamboo and grasslands. They form groups of five to 20 and can live 90 years or more.

Text and photos by phung my trung