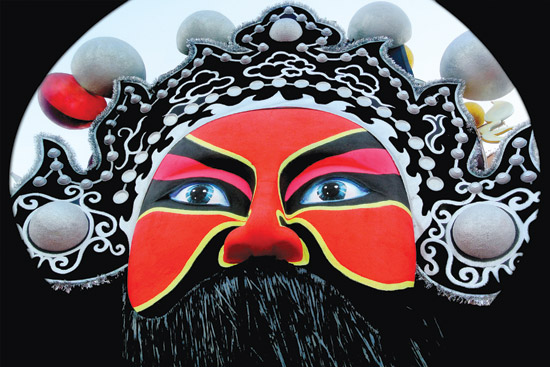 Tu?ng or hát b?i is a form of Vietnamese classical theatre. In the past, when spring and autumn came, Tu?ng troupes used to be invited to entertain villagers, when the farming work was finished.
Besides giving a good performance, tu?ng artists have to be able to do make up by themselves before appearing on stage. Compared to other traditional performing arts, such as C?i l??ng or Chèo, make up in tu?ng is quite peculiar. Depending on the character, the artist’s face is covered with a thick layer of red, white or black powder that looks like a mask.
Tu?ng masks are highly symbolic. Face colour represents the background and/or personality of the character. White colour is used mostly for women, scholars or urban dwellers. Red colour is for loyal war heroes. Black faces usually belong to straightforward and hot-tempered martial men. Thick lines are also drawn around the character’s eyes. These are more or less slanting, depending on the age, and the colour is also related to the character’s background and personality.
To preserve the masks of tu?ng characters, in recent years, there have been efforts to make tu?ng masks from different materials. Artist Huu Thong from the Dao Tan Tuong Theatre (Binh Dinh Province) made 100 gypsum tu?ng masks. At Quang Nam Province Museum, following Artist Vinh Hue’s design, painter Tran Duc, a staff of the museum, has made 30 very impressive 20cm-by-30cm tu?ng masks from composite material. These are currently featured at the museum.
Quang Nam Province Museum
107B Phan Boi Chau Street, Tam Ky City, Quang Nam Province
Phone: 0510.3852.823