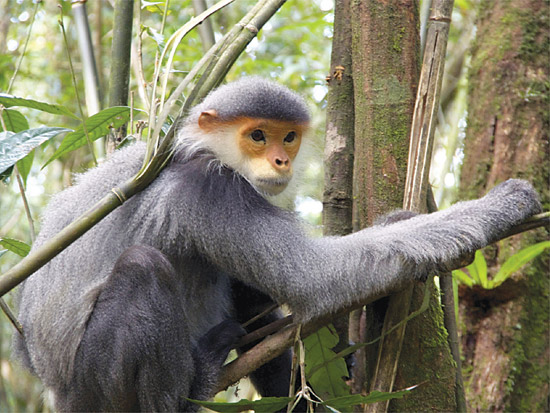 Cries pierced the deep silence of the forest the moment afternoon rains started pouring. Members of our expedition glanced at each other worriedly. Perhaps they had never heard anything so high-pitched and painful sounding. But I knew it was the melancholic sound of an animal in despair.
Established with a goal of contributing to the conservation of natural biodiversity, the Club of Heights Conquerors has 120 members. These are young people who love nature and who wish to help preserve Vietnam’s biodiversity. After viewing national parks Bu Gia Map, Bi Dup-Nui Ba, and Chu Yang Sin, we had chosen to visit and conquer the National Park Konkakinh under the guidance of the local forest rangers.
To conquer the ‘rooftop of Gia Lai’, a province in the Central Highlands, we spent two days hiking through mountain passes, streams, sheer cliffs and we slept in the forest. On the second day at sunset, the whole group reached the 1,778m peak, totally exhausted.
We merrily left the Konkakinh peak to return to the camp site. Suddenly, cries burst out. Having studying animals for many years, I realized that it was a cry for help by an animal facing death. We decided not to go back to the camp. Instead, we spread out to look for the animal. Finally, we found a female grey-shanked douc langur (Pygathrix nemaeus). This is a primate endemic to Vietnam and it is a species being conserved in a major project at National Park Konkakinh.
The langur was trapped. A cable was cutting into her right paw and it hurt her immensely. Her paw had swelled up. Seeing many strangers, the animal cried even more painfully and struggled to free herself. Its family had fled because they had apparently lost all hopes of freeing her.
Crying, shouting and shrieking fiercely, the poor langur tried to scare us away. I understood that the animal was most dangerous when it felt that its life was threatened.

We split into two groups, one trying to draw the langur’s attention, the other sneaking to her from behind. Realizing that she was hungry, I grabbed a lush fig branch – the animal’s favourite food – to gain her affection. The langur submissively plucked the leaves and devoured them. Seizing the moment, a ranger threw a shirt over her head, and everybody rushed in to hold her tight. Another ranger carefully untangled the deadly elastic cable from the animal’s arm, which was covered in blood and partly necrosed. The langur realized that she was being freed. She stopped resisting and shrieking and just moaned softly in pain. To avoid the animal getting overexcited when the shirt was removed, I gently fondled her fur, and then put her on a low branch.
The langur immediately sprang to a tree top. It turned back, looked at us a last time, gave out a long howl and disappeared among the trees. Instinct, experience and our hopes would help her find the medicinal leaves of mother forest.

Grey-shanked douc langurs, Pygathrix cinerea, live in closed canopy evergreen forests and closed canopy semi-deciduous forests. Each group has 10 – 15 individuals. Like black shanked douc langur (Pygathrix nigripes), they search for food in the morning and afternoon, on the tree. They sleep in trees and primarily subsist on leaves but also consume seeds, fruits and flowers. This species can be found only in Quang Nam, Kontum, and Binh Dinh provinces of Vietnam.
By estimation, there are less than 200 individuals. The population has continuously decreased because of deforestation. It is on Vietnam’s Red List.