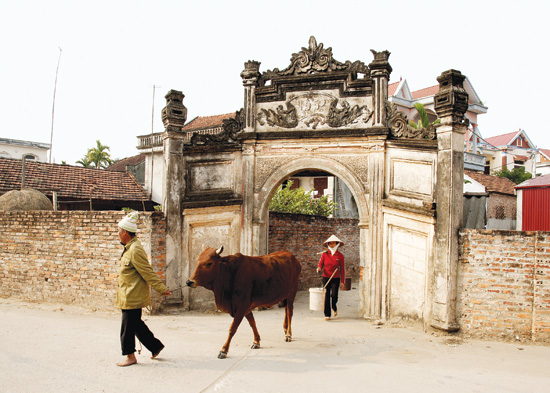 “The gate is the symbol of many Northern plains villages, asa part of water rice civilization. It’s iconic and carries the messages ofcommunity aspiration. The village gate ties many families and clans into acommunity with common customs, traditions and language.

Each village gate is unique, expressing the culture of thoseliving behind it, unassuming, just to affirm its standing in the conglomerateof Northern plains villages,” according to the Home Page of Vietnam NationalLibrary.

Some villages have a stone sign “dismount” at the gate toremind guests that even noble people have to walk in to show respect to thelocal rules.

To many natives of the Northern plains, the village gateoccupies one of the tenderest spots in the depth of their heart.

Because of the importance of the gate in the people’sspiritual life, though they may dwell in huts and be in want and need, allvillages tried all means to have a gate. Big or small, brick or stone, it’s aproof to outsiders that the life behind it is peaceful and orderly.

According to culturologists, the village gates appeared veryearly in the Red River Delta. As the capital, Hanoi was among the the firstplaces to have village gates. In the XV century Hanoi had 36 villages, borderedby bamboo lines, all having a gate. By the XIX century the number increasedsignificantly but none was without a gate. Late in the XX century, Hanoi had acountless number of village gates.

But in recent years, because of rapid and widespreadurbanization, many ancient village gates of Hanoi have been destroyed for roadwidening.

Mourning the vanishing village gates, painter Quach DongPhuong spared no efforts to collect their pictures for a meticulously arrangedexhibition.

Also, pained at the sight of the bulldozed antiquities, Mr.Vu Kiem Ninh from the Nam Dong area of Hanoi sweat to study and photograph manyof the gates. After over 10 years of hard work, Mr. Ninh published a 300-pagebook about Hanoi village gates, with 109 illustrating pictures. The book

(in Vietnamese) can be ordered via www.vinabook.vn

Where to find old village gates

Thuy Khue Street runs along the South shore of West Lake inTay Ho district. The west end of the street near Buoi road is an area with manyold architectural remains, including centuries-old village gates. Among the tenfound on this street, Yen Thai village gate (no. 562 of Thuy Khue St.) is bestknown because it was conferred with the golden words “Virtuous Lifestyle” byKing Tu Duc in 1867.

If Thuy Khue has the most of gates in the city, then Cu Davillage has the best- preserved ones in the suburban areas. Just about 20 kmfrom the Returned Sword Lake, this village of Thanh Oai district is quiteaccessible to tourists.

Cu Da on the NhueRiver was a purely farming community with its houses neatly arranged in afishbone plan. The village had 3 gates. The biggest one was at the entrance,with big Chinese characters reading, “Cu Gates” and parallel sentences writtenby an erudite villager of Tu Duc area on two sides. The smallest gate was atthe tail of the fish, with the same structure as the big gate. In 1947, thesetwo gates were leveled by French tanks. The only surviving gate is the one atthe village center, with the characters “Loyalty and Faith,” the community’smotto. The gate has curved roofs, with a big clock underneath, Dr. Trinh Sinhof the Vietnam Archaeological Institute describes.

Dr. Sinh also recounted that in the 20’s-30’s of the lastcentury, many Cu Da villagers moved to downtown Hanoi to open businesses.Earning a lot of money, they built Western-style villas at home with alleygates open to the river bank to make it convenient for travelling andtransportation on land and water.

These alley gates are reduced replicas of the village gates,with a sign at the top, such as Pagoda Hamlet, Temple Hamlet, Patrol Hamlet ora phrase expressing the people’s aspiration such as “Shared Happiness,” “QuietJoy,” “Piety and Harmony”. And there is always a pair of parallel sentences inthe side pillars.

In those good old times, the villagers raised money to buybricks to pave some sections of the river bank and built stone pillars with atoad and a river light on top to guide boats at night.

At the time, Cu Da village also had a regulation that girlsmarrying a man from the village must contribute three  Indo-Chinese franks to buy 1000 bricks topave the village roads. The price for marrying a man of another village wassixfranks, called “hanging” money. Gradually, village roads became clean and neat.But little of that can be seen today, as motorized traffic requiresbetonization.

“As in other places,village and alley gates of Cu Da bear the simple beauty of pure Vietnamestemple architecture. To the Cu Da villagers who drifted away  and then come back, seeing those gates isseeing a part of their childhood, a part of their own persona. The gates arethe cherished heritage of each human life, and an eternal heritage of thecharacter in the Vietnamese culture,” Dr. Trinh Sinh remarks.n