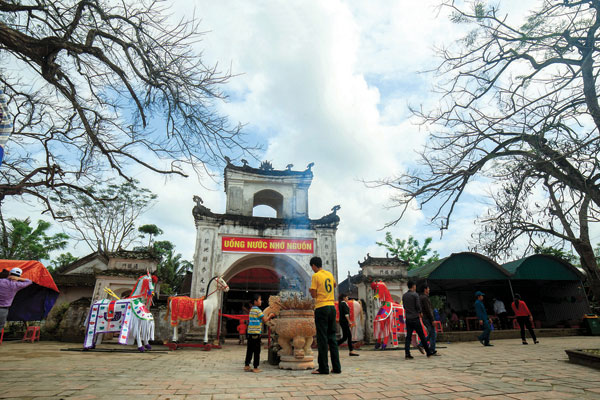 At the Bach Ma Temple

The folk games at the Bach Ma Temple Festival

Celebrants recall the most famous white horse in Vietnamese history

B ach Ma or White Horse Temple is an architectural complex built in the mid-15th century with a harmonious arrangement and many sophisticated carvings with folklore themes on a 4,894 m2 property in Vo Liet Commune, Thanh Chuong District of Nghe An Province.
As one of the most revered temples of the Nghe An region, Bach Ma Temple has a large archive of rare and precious ancient texts and relics, recognized by the government in 1993 as a national ‘heritage of history, culture, art and architecture.’
Regarding the temple’s establishment, in a 1418 uprising against the Ming (Chinese) aggressors, King Le Loi moved his armies from Thanh Hoa to Nghe An. There, a local warlord named Phan Da joined his forces. Phan Da became the enemy’s nightmare. Even after being killed in an ambush, his devoted soul continued to serve the King in defeating the enemy and helping the people to get through natural disasters. Having been inaugurated in 1428, King Le Loi built a temple to commemorate Phan Da in a national ceremony. As Phan Da used to wear white armour and ride a white horse in battles, so local folks called him the ‘Bach Ma Deity’ and the temple ‘Bach Ma Temple.’
The temple’s main structures include the Triple Gates, Ceremonial Door, Upper Edifice, Middle Edifice, Lower Edifice, and Left and Right Guards. All doors, pillars and beams of the temple are finely carved. The main gate is meticulously carved with beautiful and lively relieves depicting dragons, fish turned into dragons, war elephants and horses, and tigers. On the sides are parallel sentences praising Phan Da’s great contributions and the temple’s beauty and soothing power.
After its completion, successive kings visited Bach Ma Temple and conducted solemn ceremonies. Local people also organized big festivals to commemorate the ‘Bach Ma Deity.’
Today, Bach Ma Temple Festival takes place from the 8th to 10th days of the 2nd lunar month (5 to 7 March, 2017), attracting tens of thousands of locals and tourists from near and far.
Culture experts say that the Bach Ma Temple Festival’s purpose is to pass down the people’s patriotic traditions and to pay dues to the ancestors for having built and protected the nation of Vietnam.
In modern times, the Bach Ma Temple Festival still preserves the traditional solemn ceremonies such as the ‘opening of light’, the sacrificial ritual, and the gratitude recital, and the fun part, which includes old folk games such as ball throwing, pottery breaking, and Bach Ma poetry recital. One of the funniest and most significant games is ‘ball wrestling.’
This sport mimics the way Bach Ma Deity used to recruit his troops. Legends have it that as a local warlord he used to organize this very simple and attractive ‘ball wrestling’ game to select the smartest, strongest and most agile among the local young people.
To prepare for the game, organizers whittle the bulb of a big banana tree to make a ball 30cm in diameter weighing 5 – 7kg. The ball is boiled in water, and then sun-dried for days to ensure that it’s resilient enough to withstand rough handling.
The ball field is a clearance, about 50m long and 25m wide, at a village center or on a riverbank. At each end there is a goal which is a 50cm deep hole, also 50cm in diameter.
In a match, 14 players divide into 2 teams to struggle for the ball, fiercely but without violence. While the teams strive to put the ball into the opponent’s ‘goal’, local folks and tourists beat drums, gongs and shout at the top of their voices to cheer them. Each match lasts about 15 minutes, and the team which scores more goals is the winner. The prizes are merely symbolic to mark the winner’s glory.

Bach Ma Temple is on national highway 46A, about 40km from Vinh City. From 5a.m. to 5.30 p.m. daily, every 30min, a bus leaves Vinh City and passes Bach Ma Temple Station for its final destination in Thanh Chuong Township in which there are a dozen inns at VND100,000-VND150,000 /double room/night.
Thanh Chuong is a highland district with an area of about 1100km2, bordering the Bolikhamsai province of Laos. This is a part of the West Nghe An Ecological Reserve. Thanh Chuong is inhabited by 4 ethnic groups including Kinh, Thai, Hmong, and Dan Lai, totalling about 252,000 people. It has many sites of national heritage and relics including the Bach Ma Temple, Huu Temple, Vo Liet Shrine, and Nguyen Tien Tai’s tomb and shrine.