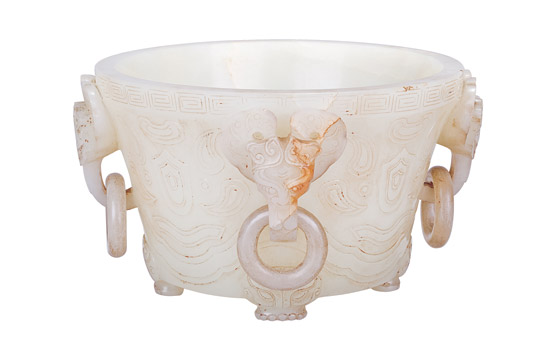 Getting to know a few jade burners

Vietnam Heritage has been publishing a series based on Vietnamese Ancient Jade, published in Hanoi, 2011, by Vietnam National Museum of History. This month the topic is censers used by the Nguyen Dynasty.

Jade objects had many uses in past times; decorations for the Royal office, pots and vases for domestic functions and censers for
religious ceremonies. Generally, censers were made only from spinach-green and white jades.
Jade censers were different than the well-known bronze censer, which only featured a vessel and a lid. Spinach-green jade censers usually had three ‘feet’ on their rounded bottoms.
The decorative subjects of spinach-green jade censers were recurring motifs from the Chinese Shang Dynasty. Censer feet were often carved to resemble animal feet. Censers might also depict tiger faces, birds, a dragon’s or elephant’s head on the handles. Besides tiger faces, there was the lotus petal, a recurring S character, and lotus string motifs.
The white jade censer had four flat round feet; its top was decorated with five roll claws and four rolling dragons in the corners. Two faces of the censer were carved into the shape of a book and decorated with the Chinese character ‘Hy’ (Be glad).
Based on the five dragons with whirl tails and rolling dragon motifs on some jade censers, we think that they are from the 19th century Hue Imperial Royal collection. They are of the highest quality and typical of Nguyen’s art.
Some grey-white jade incense burners, pots and vases have a colour, material and animal motifs similar to glazed ceramic pots from Emperor Gia Long’s reign (1762-1820).
Round incense burners with four animal feet and decorated with four elephant heads in a circle were often carved with recurring S characters and cloud motifs.