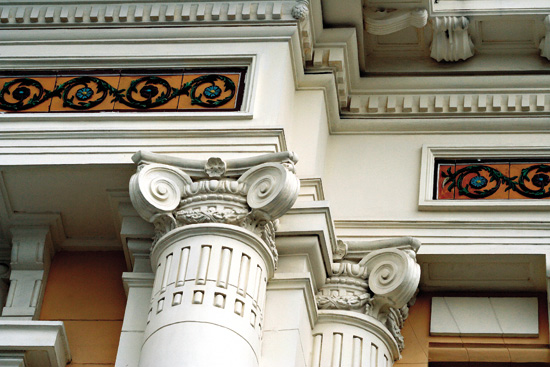 Vietnam Heritage, October-November 2011 — The Hanoi Opera House is my favourite Vietnamese French colonial building. Modelled on Charles Garnier’s Paris Opera in flamboyant Neo-Baroque style, the Hanoi Opera was designed by Francois Lagisquet and completed in 1911, according to Vietnamese sources, or 1914, according to French ones.
The rectangular porticos at two levels are united by tall Ionic columns, behind which is a wide central balcony at the upper level. The roof cornice is joyously festooned with griffins.
When I was shown through the building for the first time, in 1997, by the Vietnamese architect in charge of restoration, Dr Prof. Hoang Dao Kinh, he was proud a poor country like Vietnam had found $14 million for a temple to the arts. The original plans were followed, but air-conditioning and heating installed. The new materials came from Vietnam, including slate from Sin Ho and clay chimney pots from Nha Trang. Italians supervised the re-laying of the mosaic floor in the foyer and French artists saw to the ornamental details of the fine Corinthian columns in the red-plush auditorium that holds eight hundred.
Professor Kinh led me up the grand central staircase to the first floor foyer and I thought at first that he was pointing to the gracefully curved wooden frames of the Art Deco mirrors, but he was pointing to the walls.
‘There were many bullet holes here, many people died, both French and Vietnamese,’ he said.
Throughout the Indochinese War and later, during the American-Vietnam War, the building was left to decay. Nevertheless, on 19 August 1945, following the surrender of the Japanese, Ho Chi Minh’s Revolutionary Committee rushed to one of the balconies that now belonged to the
independent Democratic Republic of Vietnam.
-From an item in Hanoi of a Thousand Years, by Carol Howland, published by The Gioi Publishers, 2009