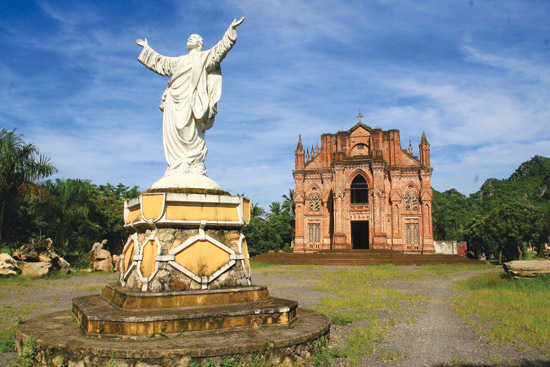 When Ninh Binh is called to mind, people often think of the Phat Diem stone cathedral, the ancient capital of Hoa Lu, the Trang An tourism site and Bai Dinh Pagoda, but few are those who know that hidden deep in the secluded countryside beneath the mountains’ feet are churches representative of a religious tradition with exceedingly unique architecture. Downstream from Nho Quan, on the road that leads to Cuc Phuong National Forest, is a unique architectural structure that was built entirely by the talented hands and ardent love of its priests. That is Chau Son Abbey in Phu Son, Nho Quan, Ninh Binh, near Hanoi.

According to the abbey’s records, this austere religious cathedral was built in 1939 and completed in 1945 without any modern machinery or means, including the cement pillars. The chief architect of the abbey was Father Placido Truong Minh Trach, a young clergyman who never studied at any school for either architecture or construction. Chau Son Abbey was his masterpiece, into which which he poured all his heart and soul in order to create. Without models or blueprints, each feature and every brick gradually took shape through his stupendous intellect and imagination.
Striking and imposing, firm yet charming, the structure was designed in the Gothic architectural style, mainly with the material of unplastered red bricks to engender in it a distinct beauty, absolute simplicity, trueness to life and uttermost warmth. For over six decades, it continued to preside, prominently enshrouded in a forest of massive ancient trees. The efforts and refined talents of several dozen priests and local artists who baked the bricks and did the construction themselves still remain steadfast before the tribulations of time. The unbaked brick walls that mainly compose the structure are 0.6m thick with pillars 1.2m thick in some places, thus creating sturdiness as well as warmth in winter and coolness in summer.
Extending throughout the structure’s 64m length are pillars that were skillfully crafted to form small towers and are considered the highlight of the structure. The walls are harmoniously adorned with windows that split into upper and lower levels. Inside are wood-and-glass windows, while outside are gouged sculptures that portray images of saints and Jesus Christ bearing the cross and praying. Inside the cathedral, the natural lighting is just enough to slip into two broad corridors containing several large windows. The sun’s rays glisten in contrast to the rows of round pillars, decorative patterns, and reliefs. The 21m high white dome is the pinnacle of the art throughout the cathedral. It gives prominence to the masterful color reliefs that symbolize the Holy Trinity, the Blessed Virgin Mary, and the saints.
When art is associated with religious faith, it has a boundless power of expression and ability to resonate. It leads us to the profound reality of mankind and the world. Looking at the church imbued with the colour of red brick amidst a region of clouds and rivers, mountains and hills, lush trees, and the simple, meek lives of austere clergymen, I realized the wisdom imbedded in its blithe, idyllic countenance; I sensed the peace and contentment of human life in this world. In a space that was tranquil, yet not vacuous, and one that contrasted with the verdant lushness about it, the abbey stands expansively before slight, simple, and unaffected men, but is saturated with a verve for life and suffused with human sentiment.
*Le Huu Truc is an architect in Hanoi