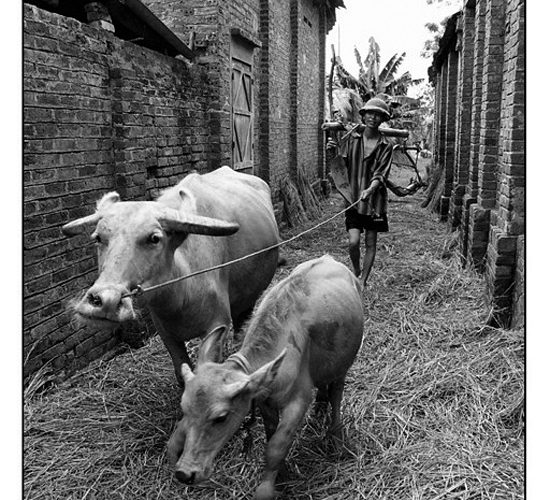 Blood of buffalo, milk of ox

Vietnam Heritage, June-July 2011 — According to Vietnamese cultural expert Huu Ngoc, ‘The buffalo is the most essential asset of the Vietnamese farmer.’ It is said, ‘A buffalo is the beginning of one’s fortune.’ People used to count their wealth in buffaloes. The buffalo can be as faithful as a dog and defend its owners, and allow young children to ride on its back.
A student of mine, Tuan Anh, who grew up in the countryside near Danang, told me it had been his job as a child to take the buffalo to the fields to graze, then to the stream to bathe. My friend Ha from Quang Nam Province told me, ‘When we think of the village, we always think of bamboo and buffalo.’ For its loyalty and devotion, the buffalo has been revered throughout Vietnam and is the subject of many a folk tale.
As legend has it, the first buffalo was the reincarnation of the deity Kim Quang, whom the Jade Emperor sent down to bring rice seeds to the people. Because of this status, the buffalo was never eaten and was often buried in the same way as its farmer owners were.
The buffalo, (trâu, in Vietnamese) is still a common sight in the rice paddies, even as development pushes back the fields and enormous trucks roar by. Some trucks, I hear, are carrying buffalo from the mountains in the north to slaughter in Saigon. Attitudes have changed.

Ox-racing in An Giang Province, in the Mekong Delta. Photo: Truong Cong Kha.

The buffalo is the focus of many ancient traditions, such as ch?i trâu (buffalo fighting), a festival activity revived at Do Son, near Hai Phong, and ?ua trâu (buffalo racing) another festival activity.
Buffaloes are  sacrificed annually by many hill tribes, including the Ba Na, Co Tu, Ede, M’nong, Thai, Gia Rai and Pa-Cô, as part of a fertility ritual, ?âm trâu (buffalo-stabbing), in honour of giang (heaven) and asking for abundant crops. My friend Vinh, who has spent years studying and photographing the ethnic minorities, described for me the ritual in detail:
The buffalo is tethered to a post, the ‘ceremony tree’, in the centre of a ring of people, in front of the communal house, and one or more strong men stab the buffalo repeatedly with a spear. The blood flows on the ground. Gongs and drums are beaten. The people dance. The blood is smeared on the forehead of every person in the village and used to make a meal.
Vietnamese medicine makes use of various buffalo parts. The ashes of buffalo hair in rice wine are used as a remedy for malarial fever. Cooked buffalo skin steeped in rice wine is also used for fever, as well as cirrhosis and pimples. The liquid from stewed, hardened buffalo skin is used to treat scabies in children. Powdered buffalo teeth, after complex preparation, are made into a salve for ulcerated wounds.  Regular doses of fresh buffalo milk can also control fevers and constipation. This information comes from herbalist Duong Tan Hung, in Thanh Nien Weekly.
Throughout history, all over the world, the ox, or cow, bò cái (Bos taurus), has been kept for its milk (butter, yogurt, cheese), meat and leather and as a draft animal. The colonial French introduced the words b?, from ‘beurre’) and phó mát, or phô mai, from ‘fromage’, to Vietnam.
In contemporary Vietnam, funds to buy a cow have made a huge difference to the lives of poor people who live off a small plot of land. Besides milking it, they use the cow for ploughing and to fertilise their land. Around Danang and Tam Ky I often see small groups of contented cows grazing with their calves, and smile to see them in their natural environment, doing just what they were meant to do – eat grass. Such sights have become rare in the West, as industrialised ‘farming’ methods have taken precedent.
Though buffalo also produce milk, (and a rich milk it is), the Vietnamese have not had a milk-drinking culture.  The power of advertising has, after years of war and deprivation, exploited a deep-seated need in the people for nourishment, and the desire to make their children big, strong and smart. Supermarket shelves are stacked high with cartons of cows’ milk and dairy products. New mothers are encouraged to give up breastfeeding by giving their babies formula with 5 x DHA, supposedly to enhance brain function, and there are special products for young children to develop cognitive skills. I’ve also noticed a fashionable café drink for young people is iced milk. When I have asked why, the most common response has been that it is ‘good for one’s health’. This in a region where acne is so common. Many American studies have shown drinking milk to cause or exacerbate acne.
To produce milk on a massive scale, dairy farming in Vietnam has become an industry and billboards the size of large houses now grace the cities and rural landscapes.