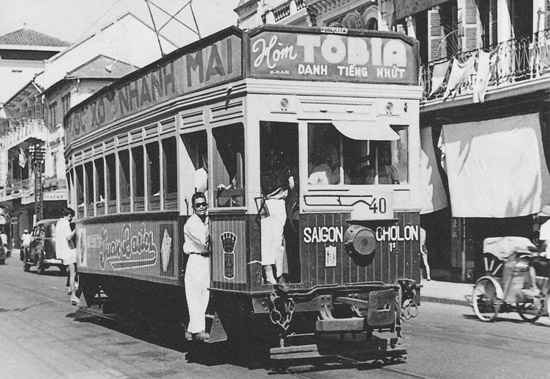 Saigon in 1935. A photo from the postcard collection of Mr Philippe Chaplain

The weight
Each Vietnamese is carrying a public debt of $887, according to The Economist. The total public debt is $80 billion or 48 per cent of the GDP.

Island getaway easier
Foreign tourists flying to Phu Quoc for stays of 30 days or less are now exempt from needing visas to do so.

Information superhighway stats
vietnamnews.vn, 29 March
Only 20 per cent of 500,000 companies in Vietnam have their own website with registered domain names.
Vietnam’s internet penetration is at 35.6 per cent, and 40 per cent of the country’s online population is between 15 and 24.
The number of internet users is expected to reach 60 million by 2018, and total revenue from internet services and content is expected to climb to $4.7 billion.

Art book published
vietnamnews.vn, 31 March
A book featuring the entire collection of painter Nguyen Cao Thuong has hit bookshelves in an effort by a Thai collector, Tira Vanichtheeranon, to showcase important works by well-known Vietnamese artists.
The book, presenting 270 sketches and paintings, was printed by Vietnam News Agency’s Publishing House.
In 2012, Vanichtheeranont displayed rare works by Thuong, who had been granted a State Award on Literature and Art, and other veteran Vietnamese artists in an exhibition at the Vietnam Fine Arts Museum in Hanoi.
Born in 1918 in the Mekong Delta province of Bac Lieu, Thuong was one of the students in the first course of the Fine Arts College Indochina in Hanoi and later, he studied at the Suricov Art University, Moscow, Soviet Union.
His art works, mostly oil, had not been widely known apart from those preserved at the HCM City’s Fine Arts Museum and the Southern Women’s Museum. Before he died at the age of 83, he had won many awards and prizes.

All the lovely bones
vietnamnews.vn, 25 March
Deputy Minister of Agriculture and Rural Development Ha Cong Tuan said that his ministry was considering the destruction of Vietnam’s stockpiles of rhino horn, ivory and tiger bone.