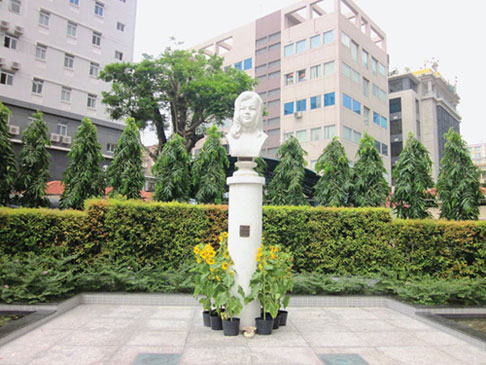 All about a boy and a girl in the park

The statues of Quach Thi Trang

The Prologue
She used to hang out on that circle of the roundabout between the Ben Thanh Market and the downtown bus station in Ho Chi Minh City. She must have got bored and lonely, for now she shares company, a quarter of a mile away, with a bronze, studious young man who is a permanent fixture in that little park opposite the Municipal Museum on Ly Tu Trong Street. You can see them there any day of the week. Just who they are only the locals – and not many of them these days – would know. Let me tell you readers of English of their sad and noble stories and why you will see them there.
This is no star-crossed romantic couple, although their ages; the girl fifteen and the boy nineteen closely fit Romeo and Juliet. Romance was not theirs, but only tragedy, not intertwined but separate. They will remain forever young. You may have guessed by now I am talking about two statues raised in memoriam of teenage Vietnamese martyrs.

The Maiden’s Tale
The girl’s name was Quach Thi Trang. The statue consists of her head mounted on a plinth. Judging from this, she had masses of snowy white curly hair and a rather chubby face. The plinth in minimal; words only records her as a female martyr and a victim. This monument was moved here in 2014 to make way for the construction of the underground railway. She died in a protest against the regime of President Ngo Dinh Diem. The latter was an ardent Catholic who had originally intended to become a priest. His tenure was marred by his blatant favouritism of his own religion to the detriment of the Buddhists. Matters had already come to head in the spiritual capital of Hue where he had banned the flying of the Buddhist flag. A Buddhist monk in Saigon had burned himself to death in protest. Then in August 1963, special armed forces mounted an attack on the Xa Loi Temple in Saigon killing thirty monks, ransacking the place and pulling out the precious stone eyes of a statue of the Buddha. They went on to attack other major temples on the same day. Such was the outrage that the very next day, thousands of students gathered in front of the main gate of the Ben Thanh market. Peaceful methods of crowd dispersal were tried before live ammunition was fired, gunning down Trang who was one of the student leaders in the forefront. This tragedy brought thousands more onto the streets and among older people brought to mind the killing of our youth back in the year 1950.

The Youth’s Tale
Whilst information on Trang’s monument is scant, that on the young man’s is non-existent. Not even the name is mentioned on the plinth. When it was erected over ten years ago, I immediately recognised it as identical to a statue I had seen by a lake in the city of Ben Tre. It is of Tran Van On, who was born in Ben Tre province in the Mekong Delta. He was a studious young man as depicted in the statue carrying a book under his shoulder. He was a model student who would have had a bright future. He was studying for the baccalaureate at the Petrus Ky high school in Saigon. He was also a pillar of the student anti-French occupation movement. On 8 January, he was shot in the stomach while in a large crowd asking for the release of detained students. He was taken to the Cho Ray hospital but did not survive. His death sparked much consternation, with as many as twenty-five thousand people attending his funeral.

Conclusions
In a city with too few green areas, this pretty little park attracts many people. People come here to eat their packed lunches. There are exercising machines which are popular with the locals. There two amazing tall trees covered in strangler vines. I often see tourists having their photos taken there. Behind the girl’s statue here is a large open-area cafe. A park or garden is also a place for reflection. It is exactly the right place to remember these tragic young lives lost. Many curious people will see these figures and wonder just who they were and never go beyond that. All we need is just a couple of plaques giving the basic biographic details. After all, in the museum opposite every exhibit is clearly labelled and explained.
They say that a country that does not know its past will have an unsure future. History is important and we need as any reminders of past events as possible. I asked several young educated Vietnamese about these two heroes. They were all familiar with the names but nobody knew their stories. Information in Vietnamese is needed. As this is a location frequented by foreigners, translation into English and other languages would also be useful. Perhaps an embassy of foreign organisation could sponsor this. Information is a weak point in Vietnamese tourism. Even at quite major attractions there is no pamphlet available either for free or on sale. Tourist information offices are almost non-existent. When you do see a capital ‘I’ sign it is just a crude trick to get you to enter a travel agent’s. I was recently in Australia, where every small town has an Information Centre packed with tips for the visitors and staffed with volunteers anxious to promote their local area and country. I know it costs money, but surely this would be a good investment for Vietnam. At least, dear reader, should you visit; you now are ‘in the know’.