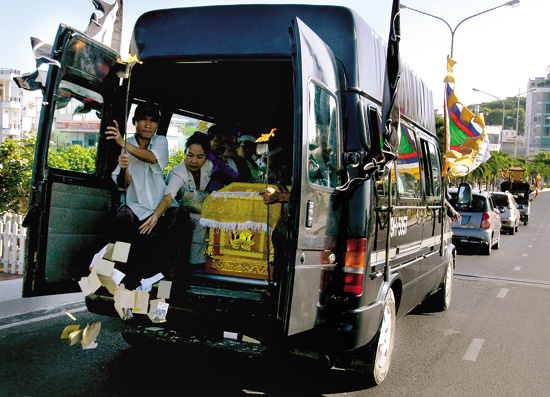 Vietnam Heritage, August-September 2011 — According to the I Ching (The Book of Changes), in ancient China, the dead were buried without coffins or _wooden planks, and also without graves or tombstones. During the reign of Huangdi (2679 BCE) the Emperor considered that children and descendants who behaved this carelessly toward their parents and grandparents were lacking in duty. He commanded the making of coffins.
During the Dynasty of Xia (2205 BC) the Chinese people started using clay to make make-believe trays and vessels, and bamboo and wood to make make-believe musical instruments, such as the bell, gong, zither and flute, to accompany the dead in the burial. Having utensils, the dead also needed servants, so wooden puppets were included.
During the Dynasty of Yin (1765 BC) make-believe things were replaced by real utensils.
During the Dynasty of Zhou (1122 BC) the people of China were separated into higher and lower-classes in their rites of burial. Royalty and great mandarins were buried with both real and make-believe utensils. Low-class people were allowed only make-believe items. According to the Commentary on the Spring and Autumn Historical Annals, the wives and children of a king or his high mandarins had to be buried alive to accompany him. Later grass and wooden puppets were invented to take their places.
During the Han Dynasty, the custom of burying the living in attendance to the dead was abandoned but the tomb-house was built for the warming [– in an emotional sense –] of the dead by his wives, children and slaves and servants. Foodstuffs, clothes and daily utensils were buried in the tomb. Human figures, elephants, and horses were carved from stone and installed around the tomb.
During the reign of Han Hua, on the first year of Yuanxing (105 CE), according to the book The Mirror of the Outline of History, Master Wang Yu made gold and silver coins, clothes and so on from paper as funeral votives that were to be burned afterward. Wang Yu may be considered the patron saint of the profession of paper votives. Burning votive papers is not mentioned in Buddhist scriptures. The practice came to Vietnam from China.
* The most Senior Venerable Thich To Lien (1903 – 1977) was abbot of Con Son Pagoda and Quan Su Pagoda, was a prominent figure of Buddhism in northern Vietnam in the 1940s and 1950s. He was editor of Phuong Tien, a Buddhism magazine. The information attributed to him above is from an article the abbot wrote and was published in 1952 by Duoc Tue Publishing House, Hanoi. It was reprinted by Van Hoa Phat Giao, a Buddhism magazine, in edition number 63.