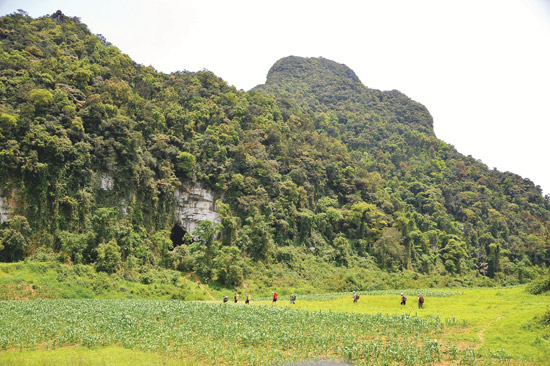 A SUBTERRANEAN ADVENTURE BEFITTING A MOVIE

On the way to Tu Lan
Valley

An explorer from the British Cave Research Association (BCRA) told me, â€˜Quang Binh has an open cast â€œgold mine,â€ a natural heritage of extremely intricate cave systems. Properly exploited, this site would be a world-famous caving centre.â€™
In June 2012, I came back to the Truong Son Range in the Central Province of Quang Binh with a group of explorers from the BCRA, who are looking for new caves to add to the caving â€˜gold mineâ€™ of Quang Binh. The expedition took place in the Tu Lan Valley of the Minh Hoa area. Howard Limbert, the BCRA team leader said, â€˜Finding new caves is becoming increasingly difficult, because they are further away. Sometimes it takes four to five days of hiking to find the entrance.â€™
The wilderness potentially always holds unexpected perils for cave explorers. Treacherous paths, rugged terrain, dangerous animals such as snakes and even the vegetable cover can cause trouble in most unexpected ways. Howard warned me about a lush, green plant named â€˜Second Ladyâ€™ that grows everywhere and seems to invite one to touch its white, smooth hair. But doing so causes a very unpleasant burning sensation. Howard instructed me that if I touched these leaves, I should not wash or scratch, but cover the touched spot with a palm leaf and wipe myself down to remove those white hairs from the skin.
On the way, I was mesmerized by thick flocks of colourful butterflies. But in the forest, beauty is often deceitful. Howard fell victim during a break while drying his stuff. The butterflies came and left pollen in his shoes and socks that caused him a lot of pain.

Beauty, danger and wonder in the big caves at Quang Binh

In this expedition, we explored two new caves, introduced by the locals as Uoi Cave and Ken Cave. To get to Uoi, we had to go through the Chuot Cave, which is over one kilometre long. Walking in the dark, I felt cool breezes-meaning that the cave led to a big exit. Another familiar signature feature of the Quang Binh caves was that there were many fish and clam fossils on the cave walls, beside the stalagmites and stalactites. In those caves with strong ventilation, the stalactites often grow layers of very hard moles. Howard called them â€˜cave popcornâ€™.
The way to Uoi was not easy at all. We had to slash our way through the thick brush. The entrance is at a mountain top. We lost our way many times, although led by local guides. Not until late in the afternoon did we come to the entrance. Looking from afar, Howard remarked, â€˜This must be a big one.â€™ I didnâ€™t understand, and he explained, â€˜In my 20 yearsâ€™ experience of cave exploration in Quang Binh, if you see trees with big leaves at the entrance, then itâ€™s a big one.â€™
The explorers got to work immediately. Martin Holroyd made a spreadsheet to create a detailed chart of the exploration. Howard prepared a laser gauge. Another team member was Martin Colledge, a specialist of forest road design. Technical data on height, width and depth of every metre in the cave was noted. Deep in the cave, I realized that Howardâ€™s prediction was correct. Cave Uoi was very wide, breathtakingly beautiful, with countless colourful stalactites; but the most striking feature was the pearl carpet. Big and small, they covered the cave floor. Howard was delighted, â€˜This is the specialty of Quang Binh caves. In Son Doong, there are pearls as big as a fist. The ones here are smaller, but still very big compared to those found elsewhere. In England, some caves that I have explored also have pearls of this kind, but they are only as big as the tip of a chopstick, not big like these.â€™
A little over 500m inside, the passage was suddenly obstructed by a sheer stalactite wall. On one side, there was an abyss so deep the bottom couldnâ€™t be seen in the torch light. After a few minutes, Howard found a man-sized hole. Howard strapped himself and disappeared behind the hole, followed by Martin. My heart pounding, I also grabbed the strap and crawled through. Suddenly, my hair stood up. I had narrowly escaped a free fall, thanks to the safety strap. I skirted along the stone wall to a vast vault, captivated by the thrill of true cave exploration