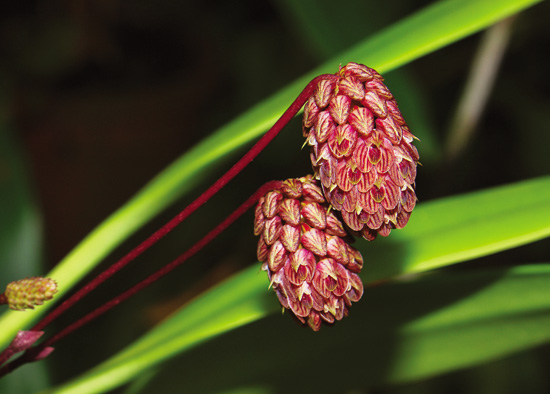 The Bulbophyllum repens, its presence in the park headed for an orchid magazine, left, and a lady’s slipper orchid

Vietnam Heritage, July-August 2011 — Phuoc Binh National Park is 60 km north of Phan Rang, the capital of Ninh Thuan Province, in central Vietnam. Established in 2006, it is 19,814 ha, 80 per cent natural forest. The primary forests are mainly dipterocarp, with plants of the Dipterocaparceae family and evergreen forests bordering the highlands of Lam Dong Province. The park is home to 327 species of which 50 are in Vietnam’s Red Book 2000, including 23 mammals, 14 birds and 13 reptiles and amphibians; 29 species in the International Union for Conservation of Nature Red List 2006 include 14 mammal species, 12 bird species and three reptile species. There are 2,025 plant species in the park.
Phuoc Binh National Park, along with the neighbouring Bi Doup-Nui Ba Park, forms a large nature-conservation area and a unique bird area of Vietnam.
Notes from a recent visit:
The park appeared with towering mountains covered in mist when the first rain began to fall.
The road to the park was serpentine and had hundreds of huge holes and deep grooves caused by heavy rain.
Along the two sides of the road were primitive forests with many large, rare wood trees on the mountain range.
Welcoming me was a mountain horned dragon, Acanthosaura lepidogaster, sunbathing on a dry branch to regulate its body temperature. The green colour of this species is a good camouflage for them in finding food and avoiding their predators.
At this time, the changeable lizard Calotes versicolor, changed from yellow to red as if trying to show off to a skittish female one. Changing colour to threaten enemies and attract partners in the mating season is a feature of reptiles.
On a high branch, a pig-tailed monkey, Macaca nemestrina, was enjoying his breakfast while looking at me with scrutinizing eyes and not a bit of friendliness of a boisterous host.
Two rangers were struggling in moving illegally felled logs. Though the roads are extremely rough and forest rangers try hard to do their job, poachers still managed to sneak in. Many endemic lady’s slipper orchid species have been stolen and sold for one to two dollars a kilogram, while they are worth thousands of dollars to orchid-collectors in Europe or Taiwan.
After climbing steeply and passing through large Dipterocarpaceae forests, I discovered plants of the ginger family, Zingiberaceae, and the forest ghost flower, Aeginetia indica, which is in Vietnam’s Red Book. This species, which is believed to enhance the sexual ability of men, only live parasitically on ginger-family trees and often flowers in the rainy season.
On a branch of a woody vine were the bright red flowers from which a couple of Gould’s sunbirds, Aethopyga goutdiae, were sucking nectar for dinner.
In the rough bark of an old chestnut tree are the flowers of a Bulbophyllum orchid, Bulbophyllum putidum, blooming red to deceive male insects into helping them pollinate.
Suddenly, on a high, almost hidden branch, I noticed a very nice species of Bulbophyllum orchid, Bulbophyllum repens, which had not yet been included in Vietnam’s plant list. Soon I would surely announce the distribution of this species in an international orchid magazine.
The rain came so fast that we could cover only the equipment and camera with raincoats while we ourselves got soaked. After one hour, the rain stopped but shallow streams had now turned into deep, strong flows that we could not cross. At an altitude of 1,500 metres, we could do nothing but wait for the water to recede while looking at the steam clouds surrounding the imposing mountains beyond the valley.
The final, flaming red rays of the day appeared on the sky and shone through the foliage in the evergreen forests.
Holding the binoculars, I stood still watching gaur, Bos gaurus, eating peacefully in their homes. This was the first time I’d ever seen so many wild bulls, a herd of gaur with 12 individuals including offspring. But it was a pity that the 50 mm – 500mm lens of my camera was not good enough to capture the special moments.
We decided to cross the forest and streams quickly to move closer to the gaurs. Perhaps because we were moving in the same direction as the wind, they picked up the strange smell from us so the pack spread out into the jungle, only the leading bull staying.
Darkness covered our way back to the ranger station of the park. Walking on the trail, I realised the sunset here was extraordinarily beautiful. Maybe because of my occupation, the forest is not a scary and dangerous place, but gives me feelings of safety and peace. And it is a place where many species, including humans, coexist.

By Phung My Trung