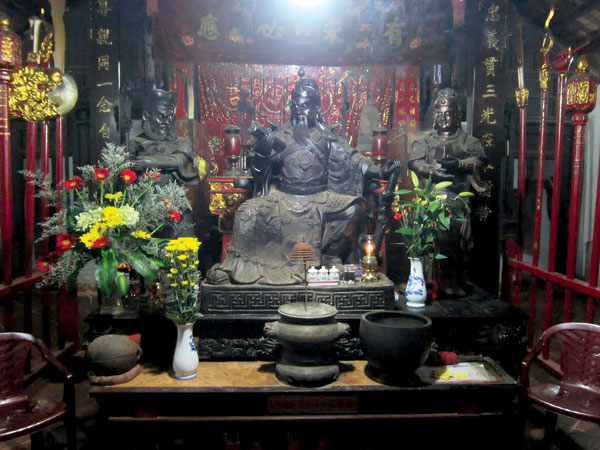 A little help starting a family

Guan Gong Temple is one of the typical cultural heritages of the Minh Huong Chinese community at Thu Xa Street, Nghia Hoa Commune, Tu Nghia District, Quang Ngai Province.
The temple was built in 1778 under Tay Son rule. The construction was finished only in 1821. In 1983, the Temple was recognized by the Ministry of Culture and Information as a National Historical and Cultural Heritage site.
The temple is structured in the ‘Frontal Holy, Rear Buddhist’ style, with Guan Gong statue, placed in the central edifice, accompanied by Guan Binh and Chau Thuong at his sides. The rear edifice is dedicated to South Sea Avalokitesvara, Ksitigarbha, Cunidihi and a picture of Bodhidharma crossing a river. On the left is a group of statues of the Heavenly Queen, Thousand-Mile Sight, Thousand-Mile Hearing, and the Lady of the Nine Heavens. On the right are the statues of Kim Dau and 12 midwives.
According to folklore, Kim Dau Ladies and the 12 midwives are the deities who preside over feminine fertility.
The Kim Dau Ladies, namely Van Tieu, Quynh Tieu and Bich Tieu, are the Goddesses of conception. The 12 newborn children carried by the 12 midwives include 6 good ones and 6 bad ones. Whether the child is good or bad, a boy or a girl, depends on how much benefaction the parents have accumulated.
Sometimes, the Kim Dau Ladies are represented by a single statue of a woman with a book in her left hand and a pen in her right. She can look up in the book to see if the child will be a boy or a girl. But the sex can be changed with sincere prayers.
Since time immemorial, the Vietnamese have believed in Kim Dau Lady’s help. According to the local 80-year-old Mr Tran Dat, ‘In the past, medical care was not so advanced. To have a healthy pregnancy, people prayed to Kim Dau Lady or Thien Thai Lady. If their wish came true, they began to believe in the Ladies.’ Therefore, not only the locals of Quang Ngai, but people from other places such as Hanoi, Quang Nam and Ho Chi Minh City also come here to pray.
He added, ‘People come to Guan Gong Temple to beg for a child. The offerings include 13 betel leaves, 13 areca fruits, 12 little candles, 1 big candle, fruits and a vase with flowers. Add a red thread if you beg for a boy or a green thread if you wish a girl’.
Discussing the thread colours, the local 69-year-old Mr Tu Quang Tuan said, ‘It has been always so. Nobody can explain. Perhaps our ancestors did some telepathy and were told that red meant a boy and green meant a girl. And they just followed the instruction.’
Also according to Mr Tu Quang Tuan, the child-begger must write down the name and age of both the spouses on a paper and put on the Lady’s altar together with the offerings. If the couple had failed to have a child for a long time, they should also submit the date of their wedding and the date the bride was received at the in law house.
The beggers must call the names of all the deities. The ritual order is as follows:
The offerings are arranged on the Lady’s altar. The host represents the two families to light the big candle for the Lady. The spouses begging for a child come to stand on two sides of the host, name themselves and ask for permission to light the candles for the midwives. The host says the prayers, while the spouses kneel and pray silently. As the candles burn to a half, the host kowtows once more. The ritual ends with a bell toll.
As their wish is granted, meaning the wanted child is born, the spouses come back to the temple to thank the Lady. There are no rules set for the offerings. They offer what they promised when begging. Ms Nam, who takes care of charitable work at the temple said, ‘They are very happy to have conceived a child and are ready to make any offering they can, such as a chicken, a full food tray, sticky rice and pudding, a barbecued pig … Those not so wealthy can offer betel quids, fruits and vegetarian foods. To sincere hearts the Lady would grant everything. But as a child is conceived, the parents must offer thanks. That’s a must. Just burn Her some incense and that will do too.’
Apart from granting children, the Lady does many other things. Pregnant women who don’t feel well can come and ask Her for the pregnancy to be without problems. A family having problems with a newborn child can also come to ask the Lady for a thread to bind on the child’s wrist.