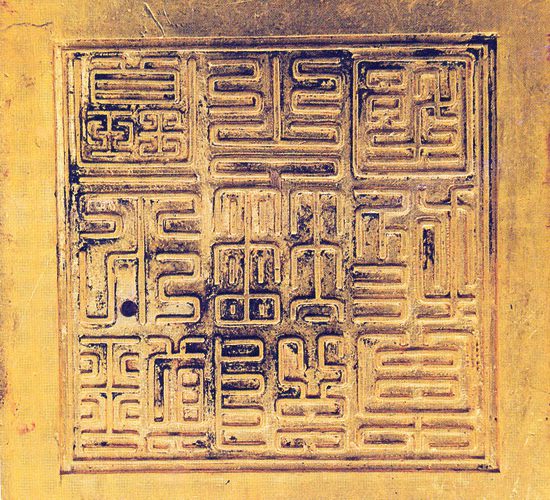 A king’s seal and a turning point in history

At the beginning of the 19th century, after unifying the country, King Gia Long dispatched emissaries to China to request investiture and change the name of the country from ‘An Nam’ to ‘Nam Vi?t.’ The Qing regime feared that the characters ‘Nam Vi?t’ coincided with the name of a former country that included present-day Guangxi and Guangdong, so they did not concede. However, King Gia Long said, ‘If the country’s name is not changed, then we will not accept investiture.’ The Qing military had been defeated by the Tay Son movement which, in turn, was defeated by the Nguyen forces. Hence, the Qing regime was afraid of offending King Gia Long and had to concede to changing from ‘Nam Vi?t’ to ‘Vi?t Nam’. Early in 1804, the Qing emperor sent Surveillance Commissioner Qi Busen to bring the investiture proclamation and national seal to King Gia Long.
The seal bestowed by the Qing emperor was a piece of gold-plated silver 10×12 cm in size and weighing 5.9 kilograms (1). The seal’s knob was shaped like a reposed camel. The face of the seal was divided into two equal parts. On the right were engraved the six Chinese characters comprising the seal of the King of Vietnam and on the left were the Chinese character equivalents of Manchu Qing (1). The seal was only to be applied to diplomatic papers that were delivered to the Chinese, but never to those within the country or to other foreign countries.
China may have invested Vietnam as its ‘vassal state,’ but the Chinese provided no help when the French attacked Vietnam from 1859 (at Danang) to 1883 (at Thuan An pass and the Hue capital). In 1884, the French forced the Hue court to sign the Patenôtre Treaty and recognize status as a French protectorate.

Before signing the treaty, the French suddenly issued a demand that said, in effect, that from then on Vietnam would no longer be subordinate to China and required that the Hue court either return the seal of the King of Vietnam that the Qing bestowed on King Gia Long in 1804 to the Manchus or hand it over to the French to retain (2). This sudden development caught the peace talk delegation, which included Nguyen Van Tuong, Pham Than Duat, and Ton That Phan, completely by surprise and made reaching a resolution difficult. The seal was carefully stowed away – how could the French have known about it? The Vietnamese delegation had no clue that a man named Gabriel Devéria, an interpreter for the French Department of Foreign Affairs and author of Historie des Relations de la Chine avec l’Annam (History of Relations between the Chinese and Annamese, Paris: 1880), was aware of the seal and revealed it to the French delegation. The Vietnamese delegation felt that returning the seal to the Qing would be too overbearing and conjured up numerous long term complications (3). The seal not only symbolized the country on official documents, but also the thought, reputation, rituals, and interests of the people when dealing with foreign nations. For this reason, to allow the French to take the seal to Paris would be humiliating to the Chinese. The two sides discussed the matter, delaying the Patenôtre Concord for a full day. Finally, the Vietnamese delegation issued a solution, ‘If you refuse to allow Dai Nam (4) [Vietnam] to retain the seal, then melt it down to forge something else.’ The French were taken aback, but had to accept. If they did not, then the Patenôtre Concord could not succeed (5).
The circumstances of the melting of the seal of the King of Vietnam were vividly recorded in the Veritable Records of Dai Nam (??i Nam th?c l?c, vol. XXXIV, page 119). The French Havas Press was also there and related the event as follows:
‘Everyone sat around the table situated in the hall of the French Emissaries’ Residence. Notable guests attended in mass. Admiral Courbet assigned some officers under his command to coordinate with some of the officers stationed at the garrison… The imperial seal was placed on the table along with a vermillion cloth box. It was a gold-gilded piece of silver 10×12 cm in size that weighed 5.9 kilograms.The seal’s knob was shaped like a reposed camel. People used the seal to print a few seals on paper to keep. After that the minister read a document describing the seal, and he verified that it was genuine. At the same time, people from the delegation retinue placed an ironsmiths’ blast forge and an earthen furnace in the center of the hall. The forge included two supporting bamboo pipes that were 1.5 meters high. Two rags were attached to the ends of the two pipes and covered them tightly. The pipes were connected to the furnace by two other bamboo pipes.
The furnace was lit. The scene played out exhilaratingly. The two poles attached to the rags were methodically lifted up by two Vietnamese and dropped back down, giving off a fluttering sound that drowned out the chatter of people’s discussions. In a moment, the melting pot glowed red on the coal-wood furnace with greenish saw blades. The time for the seal to be melted had been decided. Someone grasped the seal and was about to toss it into the melting pot, but then Mr Patenôtre waved his hands, beckoning things to a halt, and turned his head towards the Vice Director Grand Minister with a dissonant expression on his face. He asked, ‘It’s still not too late! We can keep the seal and send it to Paris, can’t we?’
The Vice Director did not reply immediately. He whispered into the ears of the Deputy Ambassador, and then shook his head in refusal.
After a few minutes, the final vestiges of the supreme authority of China in relation to the country of Annam disappeared. All that was left was a formless silver lump.’
(1), (2), (3), (5) ‘La signature de Traité du 6 Juin 1884 avec l’Annam et la destruction du sceau Chinois 30 Aout 1884,’ in the book Les Grands Dossiers de L’Illustration – L’Indochine, Histoire d’ Un Siècle 1843-1944, tr.75 (‘The signing of the Treaty of June 6, 1884 with Annam and destruction of Chinese seal 30 August 1884,’ in the book The Great Records Illustration – Indochina : Story of A Century 1843-1944, pg. 75)
(4) In 1938 Vietnam was renamed Dai Nam. In 1945 the country came back to the former name of Vietnam.