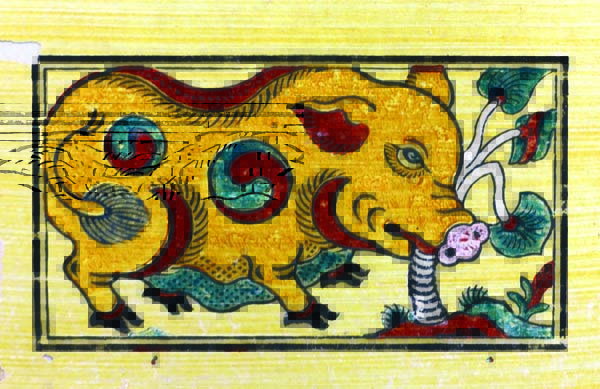 Year of the pig

Pigs symbolize indulgence, lust and satiety in leisure. The image of a pig can be used as a symbol of financial wellness. In addition, the pig head is also an important part of a tray of offerings in the ceremonial rites of the Vietnamese people.
In Oriental culture, the pig is the last one among the 12 zodiac animals, and also the last one among the six domesticated animals.
In the science of Yin and Yang, the pig’s sign is Yin, so its character is temperate and mild. Pigs reproduce at a high rate, hence their image is popularly used in folk art to symbolize fertility, good luck, and a happy family with a multitude of descendants, especially in Dong Ho paintings, highly in demand during the New Year.
In real life, pigs may be small and skinny. But in the Dong Ho paintings, they are all plump with a wide mouth, the unmistakable characteristics of a good breed of pigs that eat well and grow very fast.
The painting that depicts a mother pig with piglets expresses prosperity and fertility. The big white mother is lying in a relaxed, satisfied manner while the colorful piggies, some green, some white, some purple, etc. are snuggling around her. All the pigs have the cowlick whirls, a Yin-Yang sign of multiplication that also make them look surreal and, supernatural.
The gluttony of the pigs is depicted most sharply in the “pig eating taro leaf” painting. Taro is a usual food farmers use to feed their pigs. The pig plunges its whole mouth into the manger, and the taro leaf seems to be moving. The large body of the pig occupies almost the whole picture, its tail curleds up, the ears raised, and the four legs form a strong stance to push ahead for a bigger bite and to pull the taro branch back to hold more of it. The act of eating looks very ferocious.
In the Kim Hoang school of folk painting, the New Year pigs are printed on red paper. The back areas are printed first. Then a folk artisan would paint other details such as the eyes, mouth, ears and the white hem. The contrast between white, red and black makes the paintings more concise and symbolic.
The Sinh village (Hue) school of painting also has a pig painting for consecration. It uses only black color and the pig looks real, not stylized. The painting is only used as offering to pray for the real pigs to be healthy and grow fast…
The Do The school in the South also has pig paintings, but they belong to the votive paintings to be burnt as offering to the people in the underworld together with their other assets. These paintings a simple, made by just a few strokes, and the pigs look real, without any artistic modification.
Pig paintings can express simple dreams of the country people. They work hard to grow the pigs, and they want their pigs to grow big, fat and fast. They put a lot of hope in the pigs: “A pig’s hungry day is a man’s hungry month.” The folk artists have created those paintings with much tender love and strong attachment.

Text and photos by Le Bich