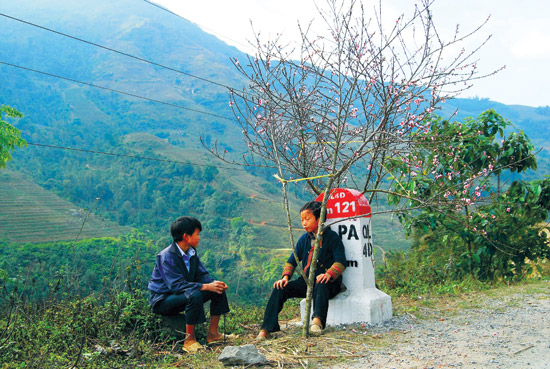 W hen I was at primary school, the school and village organized a tree-planting day at the beginning of the year. It was a really festive day. Every student planted a tree, and tended it from then on. Nowadays the campaign does not exist. Instead people dig up and cut plants in the forests to bring home, especially at New Year.
From the 15th of the 12th lunar month till T?t, cars, trucks and buses carry big branches of wild peach blossoms from the northern mountain to Hanoi and other cities. If the situation continues for several years, there will be no more wild peach. [The author appears to maintain that wild peach groves are being depleted even though photographs received at Vietnam Heritage show what appear to be cultivated stands with trees at regular internals on terraces. -Ed.]
Seven days before T?t, a ritual is observed for the Kitchen gods to go to heaven to report on the good and bad actions of the family. [Apart from what the gods say about depleting the wild peach groves]. Let’s look at the way people release the fish that convey the gods. They throw garbage into the river or lake at the same time. In the water near the bank are different kinds of plastic bags and garbage.

More and more rivers and lakes are being overwhelmed with pollution and dying. Last year, after giving offerings to the Kitchen Gods, my wife asked a nephew to take an offered carp to a lake, which is a long way from my house but still clean enough to release a fish in. My house is only a few steps from the Nhue River, which is too polluted.
In an epic, Witness of a Death, more than 10 years ago, I mentioned the death of the Nhue River. The river was described as rotten and the bad smell rose to Heaven. Now, the river is more comprehensively dead. What was dozens of years ago, poetically clear, blue water, that sent cool breezes flying through the city and villages along the river is now a corpse.n

Pictures: Peach blossom for sale in Sapa, in the days before T?t in 2011. Photos: Dinh Quoc Hong.