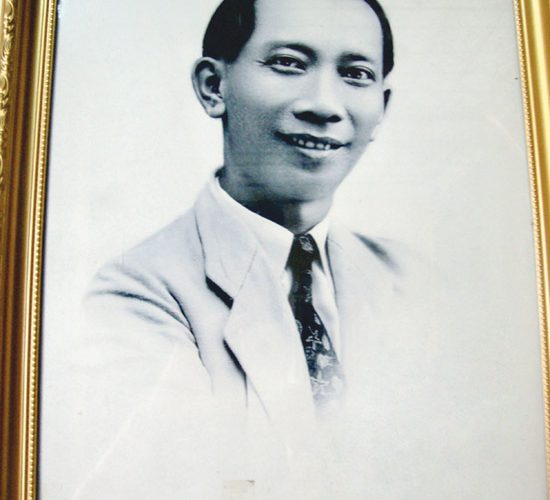 Where the lover lived

In 1867, after occupying the entire southern region of Vietnam, the French colonists built many villas for their officials. Since then, French architecture has influenced many Vietnamese wealthy landlordsâ€™ houses. Nowadays, there are still many old houses with the combination of Eastern and Western architectural style left in Mekong Delta, a locale once famous for playboy landlords.
The most well-known old house is at 255 A, Nguyen Hue Street, Ward 2, Sa Dec Town, Dong Thap Province, though it is neither the oldest nor the biggest.
Its fame is due to its being frequently mentioned in a best-selling semi-autobiographical novel, which has been translated to 43 languages, has sold 2.4 million copies and was awarded the 1984 Prix Goncourt, a prestigious French prize. It is â€œLâ€™Amanteâ€ (The Lover) written by the French writer Marguerite Duras and was published in 1984 by Les Ã‰ditions de Minuit.
The novel is about a love affair, which started â€œat first sight,â€ but ended in resentful tears, between the owner of the house – a Chinese-Vietnamese landlord named Huynh Thuy Le, 32, and the author, when she was 15. The affair was said to be real and set in 1929 in Saigon and the Mekong Delta.

Inside of the house of Mr Huynh Thuy Le.

In 2010, the government declared the house a â€˜national relicâ€™. According to the information stated on the Dong Thap Province website, after the death of Mr Huynh Thuy Le in 1972, his five children left to reside abroad and the house was requisitioned as the police station of Sa Dec Town. In 2007, the Department of Culture, Sports and Tourism of Dong Thap Province proposed that the police station be moved to another place, so that they could open the house to public and offer tours to visitors.
While I was sipping tea and having ginger jam with other visitors, Ms Tuyen, a tourist guide, told us that the house was built in 1885 by Mr Huynh Cam Thuan, Leâ€™s father and a real estate magnate. At that time, the house, designed in the Chinese â€“ Vietnamese architectural style, was made completely from rare wood and has an area of 258 square metres. In 1917, Mr Thuan built a brick coat in the French architectural style over the wood house.
â€˜Mr Thuan was one of the richest men in Sa Dec Town, and his house was renowned for being the biggest,â€™ Ms Tuyen said.
â€˜The Vietnamese architecture is displayed outstandingly on the three-compartment structure and the roof covered with yin-yang double tiles, while the French architecture can be seen on the houseâ€™s faÃ§ade, floor and ceiling, which are embossed with Renaissance-style patterns. In particular, the domes above the doors, windows and gates are in the Roman architectural style, which gives the house spacious and airy feeling. Furthermore, the Chinese aspects can be recognized on the wardrobes, beds and altars, which are carved and lacquered skilfully with dragons, birds and plants such as orchids, champacas, chrysanthemums, bamboos and apricots to show the landlordâ€™s wealth and superior rank.â€™
Ms Tuyen added that since 2010, tens of thousands of foreigners have come to visit the house every year, of which French visitors account for 50 per cent. Many cultural researchers and architects also visit the house.
Standing in the living room, Ms Tuyen pointed at the wall displaying photos of Duras in her childhood and after completing the novel, and of Mr Leâ€™s family: himself, his Chinese wife and children.
â€˜Mr Huynh Thuy Le married a Chinese because Mr Thuan strongly disapproved his sonâ€™s marriage with a â€œwhite girlâ€ and because Durasâ€™ mother and her older brother refused to let her get married to a local man. As soon as he married, Mr Huynh Thuy Le became the heir of the house.â€™
The ceiling of the living room is carved with a big dragon encircled by four bats holding coins in their mouths. Ms Tuyen said, â€˜These decorations symbolize the affluence of the owner.â€™

Stepping to the front of the altar at the centre of the living room, which is dense with encrusted and lacquered patterns, Ms Tuyen said, â€˜This is the altar honouring saint Guan Yu (also named Guan Gong). According to the ancient customs, the Chinese, especially businessmen, often worshipped this deity for power and prosperity. Because the altar of Guan Yu is the soul of the house, it is encrusted with ornate patterns which characterize the most typical of Chinese culture.â€™
Behind the living room are two wooden bedrooms carved elaborately with various patterns. On the left side is the room for the boys of the family, whose door was carved with images of urns, swords and books. On the right side was the room for the girls of the family, which was identified by silk ribbons, flowers and leaves. Nowadays, visitors can rent these rooms for a homestay night at the price of VND900,000 for a room for two.â€™
Scattered inside the house are tools and furniture, which are said have been used by Mr Huynh Thuy Leâ€™s family, such as a safe, a make-up table, a wine cabinet, and a bookshelf.
There is a one-night tour for VND800,000 â€“ VND1,000,000/person (depending on the number of visitors). Price includes a visit to Sa Dec school – where Marguerite Durasâ€™ mother worked as a principal, a visit to Kien An Cung pagoda- which Huynh Thuy Leâ€™s father donated to about 100 years ago, a visit to the flower village of Sa Dec – one of the biggest traditional flower growing community in Vietnam and a sailing trip to discover Xeo Quit forest – a national historic relic. Tel: +84 (67) 3773 937, or Email: nhaco_huynhthuyle@yahoo.com. Entrance fee to the house is VND25,000/person with guides in English and French.