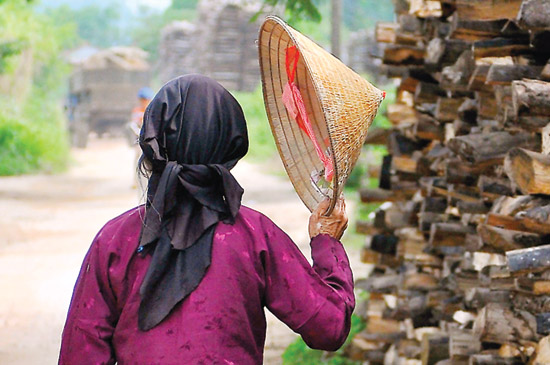 When clothing comes to a head

Female headscarves have an important role in the history of clothing. They manifest beauty, custom, and adaptations to climate and geography. Whether suggestive or discreet, they lend a mysterious beauty to the face. Kinh (the ethnic majority in Vietnam) women do not have many styles of headscarf; the most typical being the crow-beaked turban. The headscarves of women from other ethnicities are also quite plentiful and immediately indicate the group or tribe to whom they belong.
The Muong people are considered the longest-standing indigenous inhabitants of Vietnam. Thus, we can say that the style of wrapping headscarves among Muong women is characteristic of antiquity. The headscarves of Muong women in Hoa Binh Province near Hanoi are quite simplistic, with just a white piece of cloth wrapped high around the forehead and tied behind the nape. Meanwhile, Muong women in Phu Tho Province, also near Hanoi, in olden times used to wrap a square scarf tightly around the head, as did the Kinh. Three wrapped cloths — a skirt wrapped below, a cloth wrapped around the chest, and a scarf wrapped around the head — were peculiar to the ancient clothing of Indochina and South Asia at a time when people were familiar with weave and design but, rather than sew raiment, simply wrapped cloths. This is clearly revealed in the photographic material and paintings done by Westerners when they travelled to Southeast Asia. In fact, in ancient times, in many torrid places, women wore skirts and headscarves, but went bare-chested — young and old alike. The engravings in Cham sculpture vividly depict images of bare-chested women in skirts.

On ancient Dong Son bronze drums are engraved images of many people with long bird feathers stuck onto the tops of their heads. However, in order to fasten an object on the head, they had to wrap a headscarf around it. Dong Son daggers have human-shaped handles that show Dong Son women with a brim scarf wound around their heads.
The Kinh people’s way of wrapping turbans is quite intricate. First of all, the hair must be combed and let down to form a large, long lock. From this lock, the women tie a small scarf and the bundle of hair is wound around in a circle to form a brim around the head. Another small lock is parted at the front and let down over the temples or sometimes slightly off to the rear. Some people with thin hair also use a ready-made, tightly wrapped lozenge of fabric shaped like a snake to stuff into their hair. The ‘snake’ is attached to the lock of hair and then fastened against the brim scarf. After that, the women cover the outside with a square headscarf. The top of the headscarf sticks up like a pointy arch on the forehead, while the tail end of the headscarf points downward behind the back like the beak of a crow.

The two sides of the headscarf hug closely around the head and can cover both ears or just above the ears. The headscarf is very tight and neat. If you look at the silk paintings by painter Nguyen Phan Chanh, you can clearly see this style of headscarf wrapping. Of course, there are many other ways of winding the turban according to living and working conditions. However, the above style is the most prevalent whenever women participate in festivals, funerals, or weddings. The men’s turbans are mainly fashioned into folded turbans, which later transformed into pre-folded, ready-to-wear turbans for convenience. On the road to opening up the frontiers of the south, from the fifteenth to nineteenth centuries, Vietnamese men influenced the Champa style of winding turbans such that the latter were wound into a large bundle with a wide brim on the head. This image had already been painted by Westerners as early as the seventeenth-century.
A look at some photographs that were taken by Westerners and some of the Nùng tribes in Lang Son and Cao Bang provinces in northern Vietnam shows that both the men and women wore and still wear headscarves close to the head. The men wrap a turban tightly around their heads like a hat, while the women — like the Kinh — wind a brim scarf on the inside and cover the outside with a square headscarf. However, rather than letting down a ‘crow beak,’ the Nung women let down the headscarf evenly along both sides of the nape by tightly winding the edge of the scarf onto the forehead or by tightly tying it towards the rear and then tucking in the scarf to cover the head so that the tail end hangs down behind the nape.

The square headscarf is used by Kinh women in many situations. When they work the fields in the sun, they lower the headscarf to wrap closely around the entire face so that only the ears are exposed. When they are at leisure or feeling hot, they let the headscarf down to the shoulders and tie a knot at the neck. If children take to the road in the cold, the square headscarf can be wrapped around them. If a woman needs to have an expedient delivery, she can undo the headscarf to deliver and cover the newborn baby. If a bag is needed, the headscarf can be tied into a knapsack to carry on the shoulders. Aside from the headscarf above and the loincloth below, there is also another long cloth band that even has a pouch. The long cloth serves as both a money pouch and a belt. This so-called ‘elephant pouch’ (bao t??ng) or ‘elephant bowels’ (ru?t t??ng) is usually made of silk and is multifunctional. The three long cloths for men — the turban, loincloth, and elephant pouch — and the three cloths, one square and two elongated, for women — the square headscarf, skirt, and elephant pouch — were indispensable to the clothing of the ancient Vietnamese. They accompanied them throughout their lives and even penetrated literature: ‘A smile like a mahogany flower, a headscarf like a lotus blossom.’
*Phan Cam Thuong is an expert on Vietnamese culture.