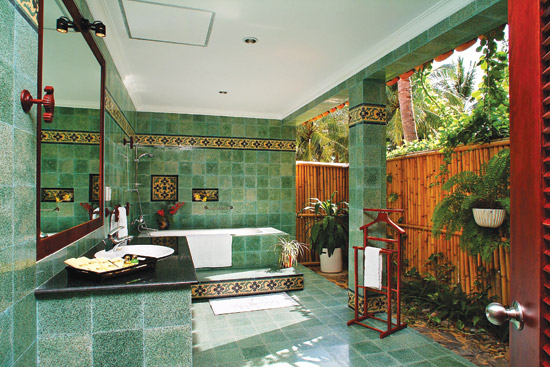 Most Western tourists these days are concerned that the hotels they stay at are environmentally friendly. This was news until recently to many in Vietnam, but Seahorse Resort & Spa was quick to heed it. Knowing that local recognition of environmental good practice can be easily be obtained with the slip of an envelope, and that anyone with a passing knowledge of Vietnam is aware of this, Seahorse Resort & Spa has gone to lengths to obtain the Asean (Association of South East Asian Nations) Green Award, thereby being only one out of ten hotels in the country with this accolade.
I spent the rest of the morning relaxing by reading a book on my bungalow veranda and having a stroll along the beach. Furthermore I had a dip in the pool where I overheard a woman with a broad Yorkshire accent expressing her satisfaction with the hotel and Mui Ne in general. I even had time for the breezy bicycle ride I mentioned earlier.
All this activity worked up my appetite and I decided to do justice to Seahorse Resort & Spaâ€™s other less formal restaurant, roadside, which goes under the name of â€˜Bistroâ€™. I decided it was the time to try out the Vietnamese food. Some people complain about the street noise but coming from Saigon the location was not disturbing for me. Rice seedlings in a pot decorated the table and a basket of fresh green coconuts hung from rafters to the side of it. I ordered the seafood rice at VND154,000 to be followed by pork cooked in a clay pot (Thá»‹t heo kho tá»™) at VND110,000, all to be washed down by a bottle of Saigon Green beer. To my amazement the rice dish came accompanied by bread rolls and butter complete with butter knife. Laudably, they had learned the customerâ€™s preference and this had been communicated between the two eateries. I smiled at the cultural misunderstanding. In many years of living abroad myself I have made enough of them. And after all an error of addition rather than omission is hardly an error at all. Battting on their wicket they delivered their own countryâ€™s food well. I left satisfied and fortified for the long trip back home.
The Seahorse Resort & Spa has everything you need to recharge your batteries with ozone from the sea, the sweet scents of its gardens and the soothing therapies of its infinity pool and spa. Accommodation is to high standards and to the state of the art in comfort. The food, beverage and services are tip-top whilst there still may be a slight struggle at times to comprehend the strange ways of foreigners. Think of the word â€˜seahorseâ€™ not to denote something that needs to be immersed in wine but the place to immerse yourself in when staying at the now famous beach village of Mui Ne.n