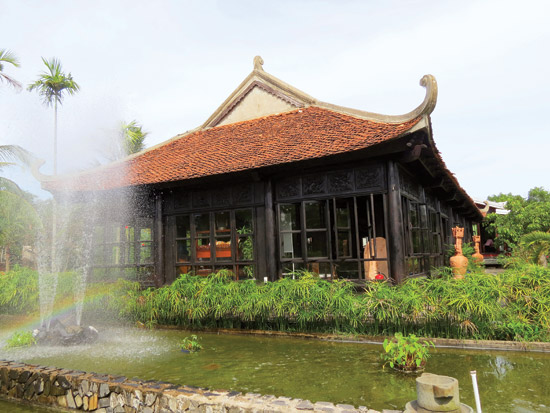 Vietnamese culture and more set in a Garden of Eden

The morning of departure came all too soon. After a large buffet breakfast of international and Vietnamese fare I found myself being driven in the hotelâ€™s limousine to Danang Airport in the company of manager and tour guide French speaking Mr Son, who pointed out places of interest on the way, war graves, the old American air base Non NÆ°á»›c beach and the Marble Mountains. Mr Son spoke impeccable French and his youthful plans to study at the Sorbonne I was to learn had been thwarted only by the onset of war. I had had the best of all worlds at Le Belhamy, history, art and architecture, botanical gardens, beach pool and bodily rejuvenation. Now it was back to return to the rigours of a hard daily work routine in Saigon but at least with the comforting thought that I now know where to find Eden when I need her.

Le Belhamy Resort and Spa
Dien Duong Vilage near Hoi An ancient town
Tel: (0510) 3941-888
www.lebelhamyhoianresort-vietnam.com
Published room rates inclusive of taxes from $101 (VND2,121,000) for two adults at Hoi An Garden Residence Villa to $305 (VND6,405,000) for up to six adults at Beach Front Pool Villa. Children six years and under free.