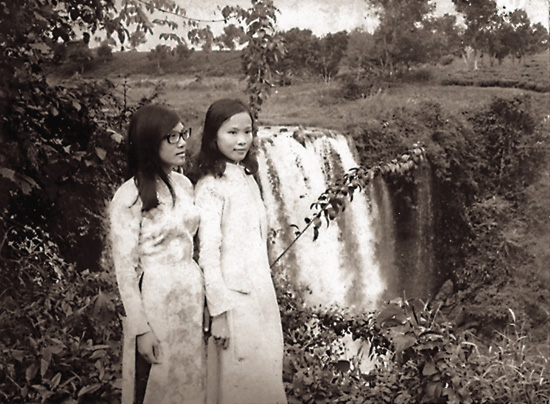 Turning off the great waterfalls

Da M’rong waterfall in Bao Loc, Lam Dong Province, before hydroelectricity. See below for a scene after the arrival of hydroelectrictity.
Photo from the archive of Nguyen Thanh Trung

Vietnam Heritage, March 2011 — Ninety-two-year-old Than Thi Hue pointed toward the back yard of her house in Bao Loc, 200 km northeast of Ho Chi Minh City, where she used to hear the sound of Da M’rong waterfall three decades ago. She recalled the wild purity and peacefulness of nature in the sound of the falling water.
‘It used to be like a part of me during my youth and I admired and loved it like family,’ she said. Photographer Pham Binh said that when the Da M’rong was still there, he made a living from putting it in scenes with visitors to the spot. It was a place for the locals to entertain and relax.

In 1985, Da M’rong waterfall was written off as the hydroelectric power plant Loc Phat was built. A dam was built across the top of the waterfall. A worker at the 0.6 MW Loc Phat plant I met there said sometimes the power plant would run only a few hours a day, because there was only so much water. He said the plant produced one million kWh a year, which he said was not worthwhile. ‘It would have been tens of thousands of times more valuable if it had been used for tourism instead,’ he said.
I went to Duc Trong District to visit Pongour, the ‘best waterfall in the South’. Before me were only ruins. The waterfall, which carries the legend of two K’ho lovers, was not there any more. There was no sign of tourists. The stone chairs were chaotically lying around. The paths were out of shape and damaged. The office was closed. I looked up to the place where the giant waterfall had been and what I could see was some black stone walls. However, I saw an acknowledgement that this was a national attraction, there still on a marble plaque at the entrance. The cleaners told me that the waterfall had used to attract film crews from Saigon and Hanoi.
This valiant waterfall ‘died’ in May, 2007, when the Dai Ninh hydroelectric power plant, some kilometres away, was built across Da Nhim River. According to Vu Van Xe, the director of Dat Nam Tourism Company, which manages the waterfall, it has some life in it when it rains. Dr Dang Van Bai, chief of the Department of Heritage (the former Ministry of Culture, Information and Tourism), flew there after having heard of the Pongour’s ‘death’. He looked at it, sighed and decided: ‘We will not take its title away. We will see in the future. It was so beautiful …’
The Dai Ninh hydroelectric lake also swallowed the Gougah waterfall, which was also acknowledged as a national attraction, ten years ago. Pham Kim Loan, the waterfall’s manager, also the director of Tai Nhan Tourism Company, said, ‘I was transfixed witnessing the waterfall disappearing.’
When asked if they had been consulted before the hydroelectric power plants had been built, the director of Lam Dong Departure of Culture, Sports and Tourism of Vietnam, Do Van The, said, ‘Since hydroelectricity is a national matter, everything is assigned from above. When we see the attractions disappearing, we are really sorry. We have to propose to the Government to take the acknowledgement of national attractions away because they are not there any more.’

When I arrived in Di Linh to see the Khói (smoke) Waterfall, on the Dong Nai River, the president of Tan Thanh Ward told me it would ‘die’ soon. It would be submerged in the hydroelectric lake Dong Nai II.
When I went to Loc Tan Ward, in Bao Lam District, the ward president, K’Che, told me a hydroelectric power plant was being built on the big stream Dam Bri. He was afraid that the plant would impact on the waterfall Da Ail, which is like white silk connecting the sky and the native forest.
Bobla and Voi (Elephant) waterfalls are in the same situation, as two more hydroelectric power plants are planned.
When I asked director The about the impact of the 70 hydroelectric power plants in this land of tourism, he carefully said, ‘Perhaps … too many.’
Huynh Le Trung, a specialist with a famous consulting company in the field of hydroelectricity in Vietnam, said that even in Laos, a less developed country than Vietnam, when building any hydroelectric power plant, generators were always arranged so as not to break the flow of the river. If the rivers lived, the waterfalls lived, Mr Trung said, but the investors in hydroelectricity in Vietnam did not obey this principle to protect the environment, because the only thing they cared about was more profit and less investment. Also, under the current management system, he believed it was too easy for investors to have projects approved.
The day I went to Bobla Waterfall, in Di Linh, I met a 23-year-old local man, K’Byin. He was from the K’ho ethnic group, in Sok Village. He told me the K’ho people had used to go to the waterfalls when they were sad. It had always been known that sadness would go away when one heard the sound of the water. I wonder if anybody cares about what he says.