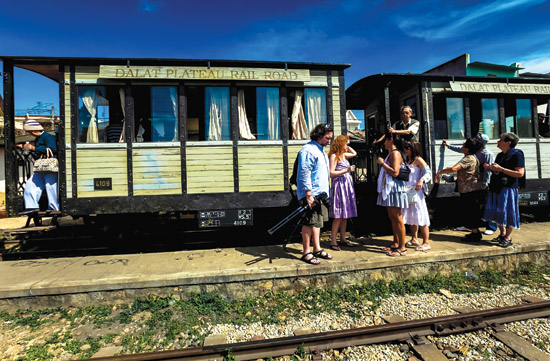 Treading upon a fading faraway railway

Sitting on Dalatâ€™s remaining train line for a space of time not even equivalent to that of sitting for half a cup of black coffee, I finally understood the avuncular train conductor, about why he is always in such a state, conserving each and every centimeter. The tourist railcar is designed to look like the one that used to run in Dalat, while the locomotive that runs on diesel fuel and was built in the Soviet era is of the type that is no longer seen throughout the rest of the domestic railway system. The locomotive was brought in up from the delta. It is just seven kilometers from the only station in the country to be ranked as national architectural and cultural heritage to the Trai Mat area, from precinct nine across to precinct 11 and that is all. It is just one stretch of track, enough to render it remote in the manner of the precipitous villages along the hillsideâ€” just one stretch of track, enough to make the whistle of the train turn grayâ€” just one stretch of track, enough to drag history into the world of Dalat.
That train journey shorter than the space of a cup of black coffee evokes a sense of being suddenly cut off, and of choking the heart. Thus I tortured myself by sauntering on along the old tracks, on the obscure rail-bed of the rack railway that used to spout steam, ran on a steam engine, and traversed the misty mountainous roads from the Trai Mat area. I went on the road that, over twenty years ago, before coming to Dalat to take my university entrance exams, I, as a naÃ¯ve student, looked for a national travel map with which to pick out the locations, roads, and means of transportation. There, the places marked on the map indicated the national railroad system, so that one still saw clearly the railroad lines from Phan Rang on the central coast up to mountainous Dalat printed boldly in red. Nevertheless, that day, when I requested that the cutest lady at the Danang station sell me a train ticket to Dalat, she said, â€˜On the map the railway lines are just recorded that way, but those lines are not in operation. The railways there have already disappeared!â€™
I searched for the road that would connect my memories and imagination with reality, despite the fading obscurity of reality in the Langbian highlands. Nature, hills, mountains, and the pine forest that runs downstream towards Song Pha Pass, owing to their having not yet been infused with the flavour of real estate, still roll on endlessly and remain peaceful and verdant, as if they were the corners of the last figure of the serene mountain plateau itself. Thereabouts, stretches of vegetation blanket over each visible manifestation of the marvelous iron tracks, which loftily and audaciously traverse through the mountains. Thereabouts, sections have been reborn as gardens for mocha coffee, persimmons, legumes and tens of thousands of black mangroves, broccoli, potatoes, and carrots. The Vietnamese people never cease to crave land, so any place that is easy to obtain they invade, any place that is empty they jump upon, and any place that is wild, they clear away for cultivation. Thereabouts, stretches of countryside streets, along with matchbox ferroconcrete houses popped up to supplant the former incarnation of the meagre railroad. A few dilapidated stations of nineteenth-century French architecture still unabashedly survive in Xuan Tho, Cau Dat, and Tram Hanh. Tent setups have also squeezed in and surround them. The impoverished masses immediately jumped into them for shelter. Deserted houses are left wide open, even more so than Buddhist pagodas. As an unbridled errant of this region, I love and understand the destitute people and the dregs of society. The carved statue at the head of Song Pha Pass is reserved for extolling railroad workers who, because of their struggle for the sake of the Phan Rang-Dalat rack railway and justice, died one day. The sculpture was erected solemnly as some sculptor carved, holding back his magnanimous will to embrace the hands of the chained slaves. The descendants of a number of former railway workers now continue to struggle with mocha coffee trees as well as Cau Dat tea plants, or they plant edible persimmon fruits, pineapples, and vegetables on the two sides of the vestiges of the Dran railroad bridge.
My emotions became ever more lonesome each time I squeezed into sections of the frigid, quiet and deserted tunnels. In the darkness, the people cannot occupy them and the authorities do not bother with them anymore, so they became desolate tunnels that fill with water in the rainy season and are a habitat for snakes, centipedes, and jungle beasts during the dry season. The long-winding curved concrete dome roof flickered with light that slipped in from the ends of the tunnels, now adorned with lichen and ferns that rendered them inanimate and mysterious. During the period in the early part of the previous century, when the degree of engineering science and mechanical equipment were quite limited, to have bored into the mountains to create tunnels through them for everyone to travel to and fro in such a way was indeed horribly amazing. In the late nineteenth and early twentieth centuries, when Vietnamese education still laboured at poetry and struggled in a backward delirium with the antiquated writings of Confucian sages, the Five Confucian Classics, and the Analects of Confucius alongside mathematics, physics, and chemistry, history naturally projected the appearance of civil engineering works associated with a crowd of highly skilled ordinary citizens. I cried out, â€˜Ohhhhhhâ€¦.. raaaaaaaaccckkkkâ€¦ raaaaillwaaaaaaay!â€™

It would have been truly hard for me not to take interest in that time when people from Dalat, Phan Rang, and Nha Trang glided by on the beloved train through the rolling terrain along a range of hills lined with a succession of verdant pine trees above and the long-winding cool earth beneath. As for the sound emitted on the railroad, it, too, differed from that of the railway that runs north and south along the seacoast below, because it rattles in quietude. When the train climbs a steep mountain pass, every single step weighs upon it as it strains itself, locks on to the cog track, and clings tightly, while sparks frequently coruscate beneath the tracks because of the heavy friction on the metal. To this very day in Dalat, with any mention of the railway the Dalat people smack their lips, especially those who have plied back and forth on this railroad track, which I refer to as the â€˜railway that connects the sea to the flowers.â€™ Some recall vividly, others only vaguely, but all want to talk about it. They describe it such that you are captivated as you hear about the characteristic sound of the cramp iron bearing down on the cog track that is exclusive to their homeland. They cause you to rack your brains, imagining something that is an actuality, the scene of the train climbing from the low-land Phan Rang at the foot of Song Pha Pass up to an elevation of 1,200m and then 1,500m above sea level. They render you speechless about the railway that pierces on through the brume at moments when the entire highlands are submerged in mist. They say that the pine forest is paradise and that travellers on the train drift through that ethereal pine forest. Every day, the train zips from the lands inundated with sunrays on the seacoast, meanders through the twisted mountainside straits of wide-leaved forest in Song Pha Pass, and then enters the limpid pine forest and submerges into the frigidness of the highlands. And then back again. In the memories of many a person are images from the train car window of the tropical countryside, followed a few hours later by an immediate encounter with the temperate countryside, as the immense view is constantly and suddenly cut off and obscured by the mountains and hills.