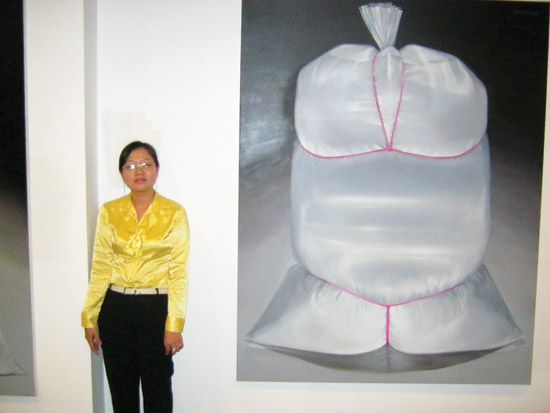 Transparency in the art of plastic

When I first saw the photographs of artist Tran Minh Tam’s exhibition ‘Form’ at Cactus Gallery, I thought I was letting myself in for a ‘sheep in a formaldehyde tank experience’. But no, these were not pictures of twelve real plastic bags displayed with the fanfare of the Emperor’s new clothes and to be consumed as ‘conceptual art’. They were pictures of paintings. If you try to represent a clear polythene bag on canvass, you will realise that this no easy feat. If you can do so showing subtleties of the play of light and shadow on the bag itself and the water inside and inspire thoughts of the nature of this material, its surprising beauty, the forms it can take and the role it plays in our lives then you will have reached the very high stature in art that Mr Tam has attained. I beg you to go to Cactus itself because looking at these works on the website or in the brochure is nothing compared to the wonder of standing in their presence. If you do go to the gallery, it is situated in a wonderfully quiet backsteet with a number of interesting cafes where you can enjoy lunch or a drink. It is one hundred metres and a world away from frenetic Phan Dang Luu Street in HCMC’s Binh Thanh district.
I arrived on the first morning of the show and stayed around an hour and an half, being the sole visitor. While Cactus is a little off the beaten track and art will probably never be as popular as football, the Vietnamese really should be taking more interest in their contemporay artists, thought I. This apathy did however give me the advantage of having the services of the manageress Miss Le Ho Bich Tram all to myself. She is a university student of English and told me she wanted to extend her Art English vocabulary. Looking at the large canvasses (from 135cm x 185cm to 145cm x 370cm) which occupy two whole rooms, the first word I could utter was ‘chiaroscuro’ which I explained to her was from the Italian meaning light-dark. The Wikipedia defintion of it as ‘use of clear tonal contrasts used to suggest the volume and modelling of the subject depicted’ aptly describes Mr Tam’s work entitled ‘Form’. He is working with light affecting white, grey, and colourless subjects often with black backgrounds.

An exhibit at the Form exhibition.

However, the title of this exhibition is ‘Form’, and this must be what the artist wishes us to concentrate on more. The paintings are of bags twisted, as some do with balloons, into different shapes. They are not necessarily abstract. You can see the shape of a snail’s shell in one or two and another is akin to a long piece of roller machinery. Two standing side by side look like a man and woman with their bindings marking out male and female underwear. Miss Tram confirmed to me that this was indeed the artist’s intention. Numbers are given to the pictures and not names leaving interpretations to the beholder. The strappings that make the shapes are in very bright colours and in marked contrast to the grey black and lack of colour of ninety-five per cent of the canvass. Is the artist trying to say something about the nature and value of colour. I pondered.
As I was admiring the last of the exhibits- small bags half-filled with water-the artist himself arrived on the scene. ‘Where is the goldfish?’ I enquired. ‘Everyone asks that’ Mr Tam replied, ‘but if I painted one in, you would not be looking at the bag of water, which is what I want you to do’. True indeed. One of best functions of an artist is to get you to look at the world around you in ways you had not thought of before. Mr Tam is that kind of an artist and for me his work has certainly taught me to find beauty in the mundane.
I asked Mr Tam how long it had taken him to prepare these works for this exhibition. ‘Two years’ came the reply. ‘And how much would you expect this one to fetch,’ I further enquired, pointing at one of the larger frames.One would need a large wall to accommodate such a canvass and I imagined it hanging well in a company board room. ‘The price should be around eight thousand dollars minus the gallery’s percentage.’ he said. I told him that was a snip of a price. ‘Did you know I went on, in my country we have an artist who is not a patch on you and he is worth 240 million pounds?’ He puts sheep and fish in tanks of formaldehyde and encrusts skulls with diamonds calling it ‘conceptual art.’ Whilst I do not doubt the sincerity and neither the sanity of Damien Hirst, Mr Tam frankly gives me more to think about whilst at the same time providing more aesthetic pleasure.
In sum Tra Minh Tam is a local artist to go to watch now and one also to watch out for in the future. I certainly look forward to viewing more of his work. My reaction to this exhibition may not have entirely coincided with the copy of the accompanying brochure but it is usually the nature of contemporary art that things should be in the eye of the beholder. One thing is for sure I shall never look at a paper bag cursorily again. I see this exhibition as a hit and his creator as a star. Why not go along and see and judge for yourself?