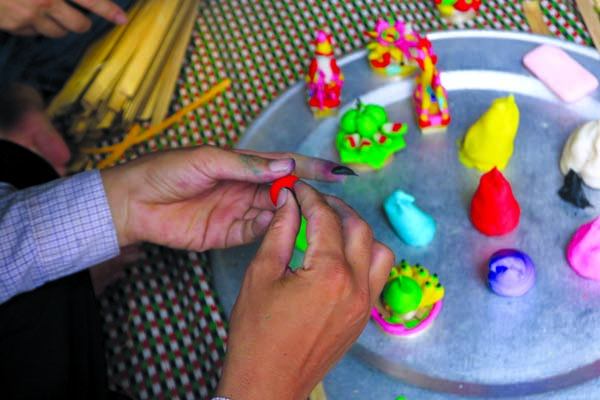 Xuan La Village, Phuong Duc Commune, Phu Xuyen District of the Hanoi suburbs is considered the cradle of the starch figurine trade. Village elders say that in the past, due to the lack of toys, some people kneaded animal figurines for them with rice flour, mixed with a little sticky rice flour. After having played with them enough, kids can steam the figurines and eat them. Also, the toys are taken to be sold to Hanoi and surrounding provinces. That’s how the trade was started.
So why the name ‘to he’? Surprisingly, it’s a mispronunciation of ‘to te’. Some artisans of Xuan La village say, in order to attract the kids’ attention, the peddlers attach a whistle to each figurine which sounds ‘to te’ when blown. So the product was given the name ‘to te’, which was later accidentally mistyped as ‘to he’ by a news reporter, and the name stuck, spread, and became commonly accepted.
It’s a fact that the starch figurines are among the very few traditional toys that can still attract kids. And it’s a fortunate thing that there are still some young, dynamic artisans who have updated the characters to include new figures from modern movies, cartoons and everyday life that are easier to recognize. I am talking about young artisan Dang Van Hau, grandson of 90-year-old artisan Dang Van Ha, one of the most famous figurine kneading masters of Phu Xuyen today.
A dynamic young man, Hau understands that the trade can survive only if conducted in a city, and he has marked his spots in Hang Ma Street and around Hoan Kiem Lake. He makes his presence noticed on all festive occasions, and that’s how the trade gives him a comfortable life. Time improves the dexterity of his hands. Visiting him at his house, I was overwhelmed by the collection of starch figurines of classical characters such as the Fairy Ladies, the Lord of Longevity, the quan ho singers, and Teu the laughter maker. They are so alive, utterly silly and at the same time, extremely sophisticated. Hau said proudly, ‘I have found a formula to make a starch that doesn’t get mouldy.’ Not only that, he even orders glass shells and wooden supports for the figurines, turning them into collectible statues.
Today, Hau not only does the trade, he also teaches the trade to his village youth. Primary and secondary school students come to him to learn the trade after dinner. It’s fun, really. No hard work required, and it can be done at any time, given good eyes and hands.
According to the culture expert Trinh Bach, the Mid-Autumn starch figurine trade originated from Hanoi, too. In the past, before the Mid-Autumn celebration, traders used come to Hanoi to buy the figurines to sell in the country. Dong Xuan and Dong Lac were where Our (Vietnamese) figurines are sold, and Ma May, Hang Buom Streets were where to buy the Guest (imported from China) figurines.
It was my luck to be introduced to Ms Nguyet Anh, the last Dong Xuan starch figurine kneading artisan of Hanoi. She used to live at Dong Xuan and had learned the trade from some Chinese who lived on Hang Buom Street. At first, she made the figurines only to entertain her family. In 1979, as the Chinese left the country, nobody sold them anymore. In the difficult years that followed, Ms Anh came up with the idea of making the figurines to sell during the Mid-Autumn season. The figurines helped her family to make ends meet for a long time. From her, I learned that the figurines made in the past were edible toys. She even made colorful rare fruits from the starch to sell in five-fruit sets to ladies who bring them to the pagodas and temple as offerings. Nowadays, Ms. Anh still works with her exceptional skills. Lovely figurines emerge from under her subtly sensitive hands of. She uses arrowroot starch to knead her figurines, and coat them with a layer of oil to prevent cracking.

Text and photos by Le Bich