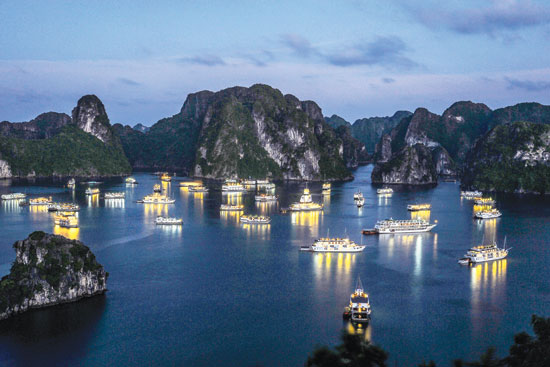 H? Long Bay has thousands of different-sized islands with folk names, and only one with a very foreign name: “Titov”.
This island’s shape is also different from that of most of other H? Long islands. Looking from above, one will see that only Titov has a beautiful golden beach, like a crescent moon embroidering part of the island, while the others’ rock bases, eroded by sea water, look like fruit stalks.
This island, 8km from shore, used to be called Cát Nàng, a refuge of fishermen. In 1905, a French ship sank in the sea and the recovered bodies of its crew were buried here. Since then the island was also called the Cemetery Island and superstitious fishers stopped harboring here. The island became desolated.

In January of 1962, Russian cosmonaut Gherman Titov visited Vietnam. Titov was the second person to ever orbit the Earth, and the first to pilot a spaceship and photograph and film the Earth from space. Chairman H? Chí Minh took the Soviet hero around H? Long Bay. Spotting distinctly scenic Cát Nàng, Chairman H? suggested that they take a rest and have lunch on the island. And then, Chairman H? proposed to rename the island to Titov. In May of that same year, the Qu?ng Ninh provincial authorities decided to rename Cát Nàng to Titov.
After this event, the quiet and pristine Titov beach, washed by daily tides, began to draw visitors to enjoy the sun, the sea and the sand. In the summer of 1999, returning to the island bearing his name, Mr. Titov uttered, “How come so crowded?” He died a year later.
Recognizing Titov’s natural, historical and touristic potential, in recent years, Qu?ng Ninh has preserved the scenery on the island and at the same time built tourist service facilities such as a dock, bars, and a watch tower on the top peak of the island.
Today, Titov has become one of the most attractive spots on H? Long Bay, with popular services such as water scooter rental, pulled parachutes, swimwear and float rent, fresh water supply and showers. Thousands of people come to Titov every day.
In 2013, the authorities decided to build Titov monument on the island. The stone statue standing on a 106 m2 base cost 7 billion VND.n