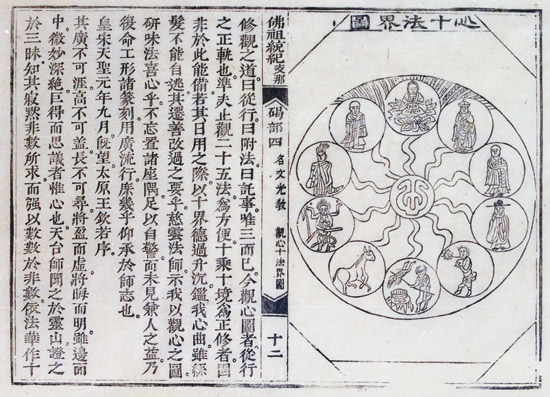 The wooden printers that saved reading

A page in a Buddhist book printed in 1856.
Photo provided by Nguyen Anh Tuan

The Vietnamese people have possessed the art of papermaking since around the third century. However, the craft of printing sutras did not exist until the eleventh century. During the Tran era, the bonzes of the Zen Truc Lam Sect on Yen Tu Mountain printed many Buddhist books. In particular, during the diplomatic process with the Yuan Dynasty, they acquired the Tripitika-the entire set of Buddhist sutras, or wise sayings, at that time-and reprinted them in Dai Viet (Vietnam), with added supplementary Buddhist works composed by Dai Viet Buddhist scholars. After the war against the Ming Dynasty (1407-1427), nearly all Vietnamese books were seized and burned. Thus, the printing craft can be considered to have been virtually lost to posterity until Le Dynasty Civil Service Examination Laureate, Luong Nhu Hoc, on the occasion of emissary missions to China (1443-1459), surreptitiously learned the craft, especially during his second mission, during which he posed as a merchant in order to study printing. Afterwards, in the years around 1470, he transmitted the craft to the people of the two villages Hong Luc and Lieu Chang in Hai Hung. A portion of the villagers who plied the trade remained in their home villages, and another portion of them went to Thang Long (modern Hanoi) to open printing houses for professional book printing. The folk paintings of Hang Trong also owe their development to this renaissance.
Although it was just printing, there were many different schools of printing and numerous varying printing techniques. Among them, sutra printing is considered the oldest. People have discovered Buddhist sutras from the Tang Dynasty (618-907). Xylography supplanted hand-copying by brush, which was ever prone to errors and labour-intensive. The ancient woodblocks could print hundreds and thousands of books with a degree of precision that ensured close replication—at least in terms of information—and only after a number of years did the woodblocks need to be re-carved. This work demanded a high level of expertise, despite anyone’s being capable of carving something onto wood boards and printing it out onto paper. In order to make a book, people had to select someone to write each and every character to form pages like those of an actual book. They then pasted the paper on which the characters were written onto a wood board to be carved. It was possible that one woodblock had just two sides producing two book pages, or people would carve two pages onto one side such that one woodblock constituted four printed pages. If a book had four hundred pages, then it would have required 200-400 woodblocks, and the number of a book’s xylographic blocks sometimes took up an entire room.
The calligraphers who penned the writing needed to know at least several thousand Chinese and Nom (the demotic Vietnamese script) characters and be well-versed in the fundamental scripts. Usually, the character-writing sections were carefully inspected so that there were no erroneous characters before they were allowed to be engraved. Nevertheless, errors and omissions still occurred, as is evidenced by several woodblocks on which people had to carve out a few characters and put in several different ones. Due to Chinese cultural influence, virtually all knowledge was transmitted though Chinese characters. Thus, when books published by Vietnamese people were compiled, some had easy-to-read content and limited vocabulary so that ordinary people could readily read them. At the same time, many illustrations were added. Thus book illustrations were quite prevalent. They were done in several forms: books with an illustrated cover page, books with characters above and illustrations below, books with illustrations above and characters below, and books that alternated between full-page illustrations and a full page of characters. Some books were a kind of scroll that was contained on one long page; others were folded page unto page, but the entire book was still contained on one page. When read, a stick was inserted to turn from page to page. As for the majority of books, most were bound to form books with sutured spines and resin-coated covers.
The wood used for printing and engraving was important. In Vietnam, usually the wood used was that of the golden-apple tree (Diospyros decandra), which had splayed grain and, though hard, had a stable character surface. It was usually soaked for a long time over many years before being brought out to be engraved. In China, people used pear tree and apple tree wood, which are also very hard. In Japan, in order to engrave woodblocks with extremely minute details, people got them from circular splices of tree wood. The grain flowed vertically, so the details could be made quite minute. Examination cheat-sheet books in Vietnam sometimes have characters as small as a sesame seed, but are very detailed and read well. (To be continued)
* Phan Cam Thuong is an expert on Vietnamese culture